After a Taft Theatre show in 2018, the trio is returning to Greater Cincinnati for a Southgate House Revival two-night stand in November 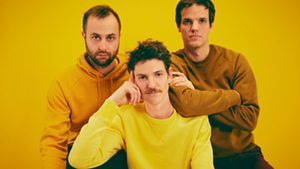 Houndmouth’s rise in popularity over the past half-decade can be traced by looking at the trio’s Greater Cincinnati shows in that timespan. In 2014, the band (then a quartet) played Southgate House Revival in Newport, followed the next year by a Madison Theater show in nearby Covington. Those shows were bookended by appearances at two Cincinnati music festivals — the Country/Americana-oriented Buckle Up along the riverfront in 2014, and the MidPoint Music Festival, for which they played one of the Over-the-Rhine event’s more well-attended sets in 2016.

Last year, Houndmouth returned to Cincinnati to headline the big room at the Taft Theatre. But venue capacity wasn’t the only thing that has changed over that time. Houndmouth has completely changed its sound since their 2014 Southgate House debut.

The now-trio is returning to the Southgate House Revival this fall for a two-night stand. Houndmouth will play the venue on Nov. 22 and 23. Tickets ($25 in advance) are on sale now via ticketweb.com.

Hailing from New Albany, Ind. (just across the river from Louisville, Ky.), Houndmouth emerged with a bluesy Americana sound often compared to The Band early on. But when singer/keyboardist Katie Toupin left the group in 2016 (she's now pursuing a solo career), the remaining musicians didn’t just switch gears — they blew up the bike and bought a blimp to replace it.

Houndmouth’s Golden Age is the band’s debut as an electronic-fueled AltPop outfit. The album was reportedly influenced by the trio’s heavy diet of Hip Hop and a decision to start anew. They also had access to new producers and studio gear for their major-label debut (the album was released in August through Reprise/Warner Bros.).

“We had all these tools we could work with that we didn’t realize were possible before,” bassist Zak Appleby told West Virginia’s postandcourier.com last summer. “It was really refreshing to be able to get out of this hole of having to do guitar-based drums and organ sounds. We had a ton of fun with the record. We would do tracks for days and days, still trying to bring new things to light.”

While the change initially angered longtime fans (who, understandably, weren’t prepared for such a wholesale change), Houndmouth appears to have made up for any loss of its following with new fans.