Plus, Ned Flanders earns some Metal cred and LMFAO sues over beer

An Out-of-this-World Demand
Website thesmokinggun.com has for years published copies of touring artists’ “riders,” which list the performer’s demands for each concert venue, and the documents have revealed particularly diva-like requirements or tour managers with fantastic senses of humor. A new classic request recently surfaced on the site via singer/producer Pharrell’s 2015 rider, which demands a framed photo of one of his heroes in his dressing room. It’s not Marvin Gaye or Smokey Bear, but late celebrity scientist Carl Sagan (best known for his 1980 PBS series, Cosmos), with whom the singer reportedly has a longtime obsession. Somewhere, Neil deGrasse Tyson is weeping.

New Band Says “Hi-dilly-ho”
Struggling bands, take note — if you’re looking to update your profile and garner worldwide attention in our internet-centric world, a good (or at least momentarily amusing) novelty band idea could be the way to go. Less than two weeks after announcing it even existed, an Arizona Metal band called Okilly Dokilly — which dresses like The Simpsons’ impossibly-optimistic, Bible-lovin’ character Ned Flanders and uses his quotes as lyrical inspiration — has garnered more than 26,000 Facebook fans and mounds of press in the U.S., U.K., Australia and beyond. Last week, the band (which describes its sound as not Metal, but “Nedal”) posted its first actual music on its Bandcamp site; the group plays its first actual show in early September. 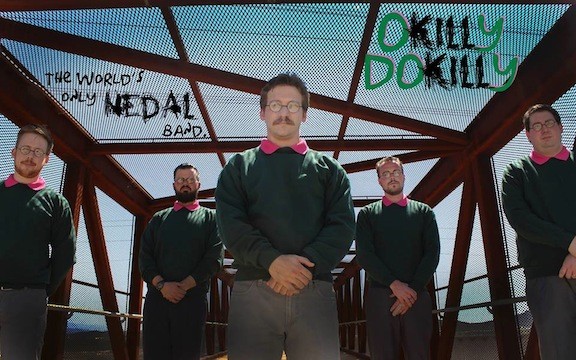 LMFAO vs. A Beer

In this week’s whacky trademark-infringement lawsuits, Pop duo LMFAO — which took its name from widely used internet shorthand meaning “Laughing My Fucking Ass Off” — is reportedly suing a Michigan-based craft brewery over its LMFAO Stout beer. Though the brewery owners say they researched whether “LMFAO” was used elsewhere in the beer realm (it was not), LMFAO still believes it creates confusion in the marketplace and potential drinkers may think the group is associated with the beer (as opposed to things like “bad music” and “bad fashion”?). Besides the pre-Pop group usage of the acronym, the brewers’ further defense is that the name actually stands for “Let Me Fetch An Oatmeal Stout.”