The music and arts fest was canceled this year due to the pandemic, but with the right amount of staple festival supplies (booze), you can transform your living room into your very own stage and pit.

Tennessee's Bonnaroo Music and Arts Festival was postponed from its original June dates to September because of concerns around the coronavirus. Then the 2020 fest was canceled altogether.

Slated to be headlined by Lizzo, Tool and Tame Impala this year, a special virtual event will take place during the rescheduled Sept. 24-27, 2020 dates instead.

The lineup looks a little bit different from the originally planned performances, but the livestreamed event, which kicks off tonight at 4:30 p.m., is still packed with some exciting big names, featuring a combination of both live acts and archived sets. Some notable performers include Beastie Boys (2009), Action Bronson, Big Gigantic, Metallica (2008), Nathaniel Rateliff and Alabama Shakes (2015).

In addition to musical performances, guests can also look forward to segments centered around health, wellness and creativity. "Dance parties in robes and with dogs. Cocktail tutorials mixed in to raise money for independent theaters. Tales from the farm. Virtual ROO-ALITY has you covered with unique original programming to keep your festival experience true to Roo," the website reads.

The daily lineup (and some sweet merch) is available on their website, and you can catch the streamed fest on YouTube starting at 4:30 p.m. Thursday, Sept. 24. 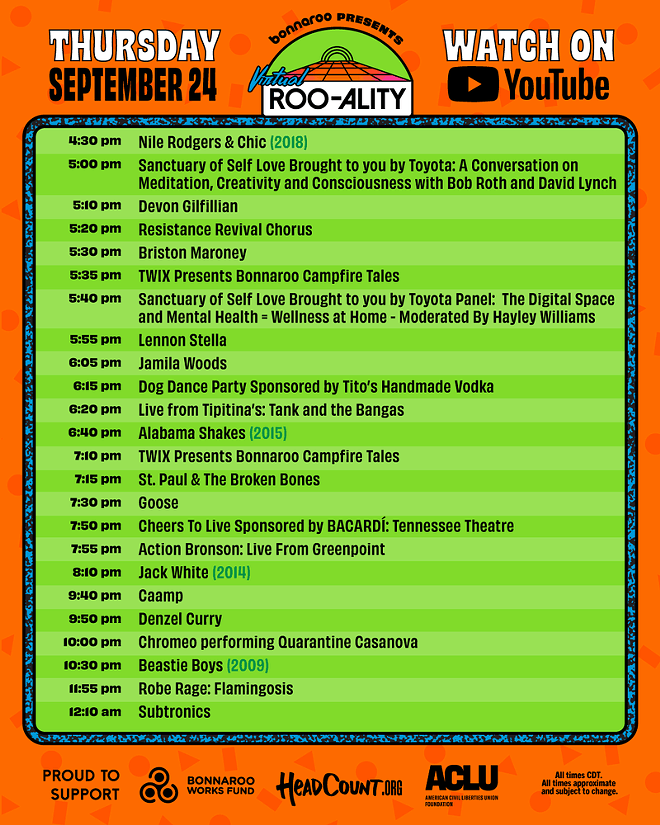