Cincinnati singer/songwriter Audley had a breakthrough year in 2018. After building up his reputation as a performer on the local Hip Hop circuit, then teaming up with the dynamic local AltRock group Sylmar for several live appearances, the artist kicked off 2018 with the release of Pink, a bold and accomplished album that found the artist showcasing his vocal and writing skills on material that danced between the boundaries of Funk, Pop, R&B and Hip Hop with compelling results. (At the time of the release, we wrote, “Like the most recent funkadelic work of Childish Gambino, Pink also moves away from a strictly Hip Hop format, exploding like a Technicolor dreamcoat threaded with elements of Neo Soul and modern/classic R&B and Pop.”)

As 2018 begins to come to a close, Audley (who recently received two Cincinnati Entertainment Award nominations for his work over the past year) is in a reflective and appreciative mood, but he’s not just going to spend his nights sitting by the fire, smoking a pipe and scratching his chin. Throughout November, he is hosting a series of weekly concerts that will include some of the Cincinnati artists he admires and has gotten to know over the past year or so. Many are also 2018 CEA nominees, and the lineups represent a diverse range of musical styles (from Pop and Hip Hop to Indie Rock and beyond).

“The Love and Light Series” kicks off Nov. 6 at The Comet, then continues each subsequent Tuesday in November (the Northside venue books a different local artist every month for its Tuesday-night residencies). Each show is free.

After the Nov. 27 Comet showcase, Audley wraps up the series with a weekend (also free) headlining show at MOTR Pub on Nov. 30 features Patterns of Chaos, Pxvce (from Triiibe) and Louisville, Ky.’s Bendigo Fletcher.

“I chose to call this series The Love and Light Series because to me it defines 2018 in the Cincinnati music scene,” Audley says. “This community has lifted each other up in a magnificent way and it deserves to be celebrated by coming together at The Comet. (The venue) asked me to do the residency a while back and I was scared to accept because I knew if I did it, I would want to do it right and it would take a lot of work.

“This year has been all about love and light. Spreading it. Accepting it. Fighting to admire it even in the darkest of times. The music community collectively chose to honor this mantra this year.”

Here’s the full lineup for the every-Tuesday Love and Light Series at The Comet (click the date for more info):

Nov. 13: Flocks, Patterns of Chaos and Jess Lamb and the Factory 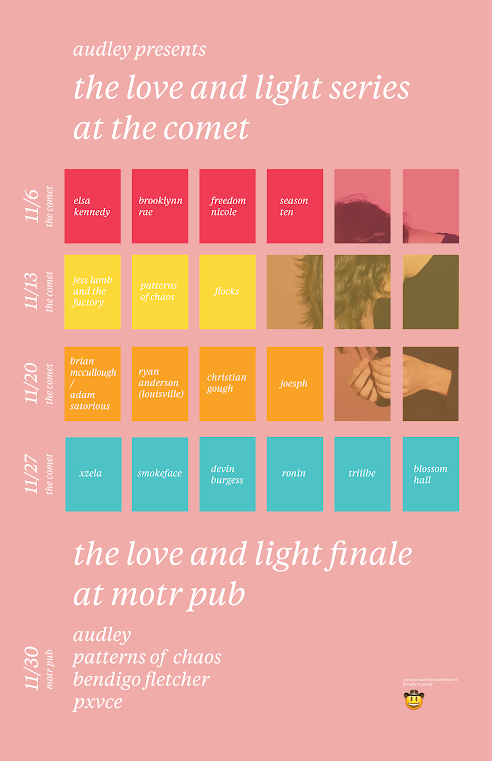 “I must say I am so happy that I decided to book this series,” Audley says. “This year has been filled with wins. Not just for me, but for Cincinnati as a whole. It's only right that we document that growth with a month of killer tunes.”