A film festival favorite, ‘Brainiac: Transmissions After Zero’ will screen at The Esquire on June 8 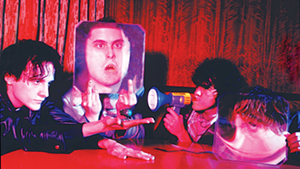 In the early- to mid-’90s, Brainiac seemed to be on the verge of becoming Ohio’s next band to explode on a massive scale when things took a tragic turn. The innovative group’s albums on Grass and Touch and Go — as well as one of the most explosive live shows of any act from their generation — had already made them superstars in the Indie and underground music worlds. Its unique fractured-electronics-meet-Art-Rock-and-Post-Punk drew many high-profile fans and influenced scores of other musicians — both peers and artists to come.

The documentary film project Brainiac: Transmissions After Zero. Transmissions tells the compelling story of the Dayton-spawned quartet, which was on the brink of wider major-label exposure when its brilliant and mesmerizing frontperson, Tim Taylor, died in a car accident in 1997.

After a crowd-funding campaign that was boosted by Trent Reznor and Mark Hamill’s social media support, Transmissions After Zero (which includes interviews with peers and fans like Steve Albini, Melissa Auf der Maur, Fred Armisen, The National's Matt Berninger, Wayne Coyne, Jim O’Rourke, Cedric Bixler-Zavala and many others) premiered at South By Southwest in Texas and has since screened at film fests and theaters across the country.

Directed by filmmaker Eric Mahoney (a former Dayton musician who’s now based in Brooklyn), Transmissions After Zero gets a premiere this Saturday in Cincinnati, where Brainiac played many shows, particularly early on in its career. Mahoney will be checking in at the local premiere via Skype for a Q&A session about the film.