Plus, new 'Twitter #music' app is unveiled after celebrities get first dibs 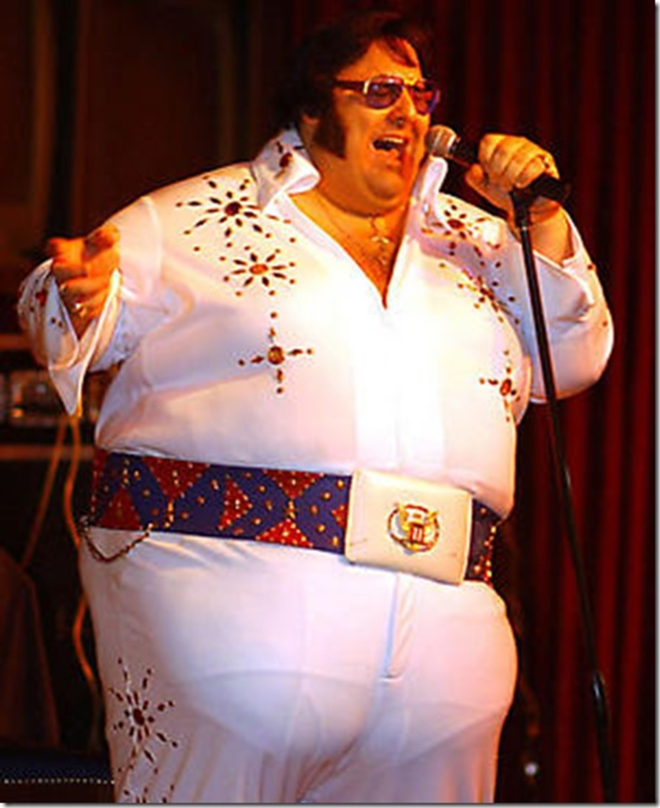 (NOTE: This is neither Elvis impersonator mentioned below)

Twitter has rolled out its new music app with some targeted marketing. The “Twitter #music” app was designed to help music lovers find new artists and songs and easily share them amongst their friends. To build buzz, a week before the public release Twitter gave “tastemakers” like Ryan Seacrest, Blake Shelton, Moby and Wiz Khalifa the app. Many of the stars humblebragged about having it first, while most were very enthusiastic, using language that sounded like they were paid handsomely for their nod of approval, like Motley Crue bassist Nikki Sixx’s stroke-job: “Loving the new app … I think this is gonna revolutionize things real fast.” It may be a cool app, but “revolutionary”?

What kind of person makes a career out of impersonating Elvis? If a pair of arrests recently is any indication (they’re not), Elvis entertainers have a lot more issues to worry about than just growing immaculate lamb-chop sideburns. Last weekend, longtime Presley performer Micky King called Des Moines, Iowa, police to his house due to an alleged disturbance. Once they arrived, King got riled up, eventually yelling at the cops and shooting at one. They shot back so King locked himself in his house for over 30 hours. He was coaxed out by Elvis’ snack staple, a fried banana and peanut butter sandwich. (Not really — they stun-gunned him).

Here's an interview with King from 2011:

King faces weapons charges in Iowa, but that’s nowhere near the trouble Mississippi Elvis impersonator Kevin Curtis was facing. As of our press time, Curtis was accused of sending poisoned letters to Mississippi Senator Roger Wicker and President Obama (police have since refocused the investigation; Curtis claims he was framed). Curtis is an ace celebrity impersonator with the ability to “become” legends like Buddy Holly, Elvis and Kid Rock (who knew there was a market for that?). According to a talent agency that works with him, Curtis can impersonate around 70 music stars, ranging from Hank Williams and Conway Twitter to Prince and Billy Idol. Curtis was reportedly upset no one was listening to the conspiracy he uncovered involving the selling of human organs on the black-market. Perhaps strangest of all, Curtis, whose family said he has a history of mental illness, had performed at an engagement party hosted by Senator Wicker about a decade earlier. Maybe the real story isn’t so unusual. If we’ve said it once, we’ve said it dozens of times — always tip your Elvis impersonator well!

Here's a compilation of some of Curtis' performances: