The Irish punk band will be at the Andrew J. Brady Center on June 8. 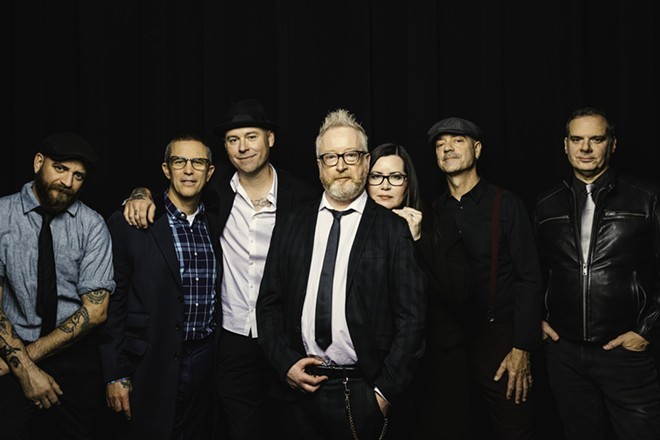 Flogging Molly frontman Dave King has often spoken of the squalid conditions of Beggars Bush, the Irish housing project he once called home. For him, music helped him get through a particularly tough period in his life.

“[Beggars Bush] was really dismal,” he says via phone from Ireland. Flogging Molly brings its co-headlining tour with the Interrupters to Cincinnati's Andrew J. Brady Music Center on June 8. “My mother was really into people like David Bowie. I kind of got into people like him, T. Rex, Thin Lizzy and Horselips. This was in the early ’70s. The Horselips were the first rock band to mix traditional music with the music of the day. I used to see them all the time. They would blow your head off. One minute, you would have fiddle and mandolin and next thing you are into a full-blown rock song. That always stuck with me, that kid of energy.”

When the Clash and Sex Pistols and Ramones came out, King says he loved them as well.

After moving out of Ireland, King joined the hard rock band Fastway, but he kept listening to a wide mix of music.

“I would be listening to the Clash and the Sex Pistols and Depeche Mode, and the other guys [in Fastway] would be like, ‘What the fuck are you listening to?’” he recalls. “They just couldn’t understand it. I could listen to David Bowie and then listen to Dubliners, no sweat. I truly feel that Irish music was always punk rock music to me. It might not have had the electric guitars and drums and bass, but it had the emotion.”

King says he didn’t know how to marry his disparate influences until he met fiddle player Bridget Regan and heard her perform.

“I said, ‘Hang on a minute. This could turn into something,’” he says of hearing Regan play for the first time. “Things started to become clearer. There was a vision there. When I heard her playing fiddle, it was a whole new thing.”

In the ’90s, the two started jamming together at an L.A. club called Molly Malone’s, and Flogging Molly came to fruition.

“There wasn’t a game plan of where we were going or who was going to be in the band,” says King. “You heard the stories of the Stones and how they met at a blues club. That’s how Flogging Molly got together, pretty much. We just met organically. There were no ads in newspapers. It just all fell together.”

Initially, the band released Alive Behind the Green Door in 1997, but King says that was merely to finance what would become the group's full-length debut, 2000’s Swagger.

“[Swagger] was quite a feat for us at the time,” he says. “To now look back on it, it is amazing. Bands these days don’t have the opportunity to be around for 20-odd years. Touring was hard enough before the pandemic, and it’s harder now. It’s especially hard that for the younger bands. We’re one of the lucky ones. That’s why we do a co-headlining tour every summer. We bring other bands out. It’s like our cruise. We have bands from all over the world come and play. On our last cruise we just did in March, we had a band that features two twin brothers. I saw them busking five years ago. They’re called the Ocelots. Everybody just adored them. Any chance we get to bring bands out, we do. We know how hard it is to get out there and stay out there and craft your sound. Don’t get me wrong, but if you were to read the charts, you would think there are just solo acts out these days. It’s hard to find a band that attracts these days.” Sound Advice: Nick Lowe, Los Straitjackets to Bring Rock Romp to Cincinnati's Memorial Hall: The "Cruel to Be Kind" singer has entered a new phase of his career, and he's enjoying the hell out of it.


For its new album due out in the fall, Flogging Molly reunited with producer Steve Albini (Nirvana, PJ Harvey), the guy who helped the band record Swagger along with its follow-up, Drunken Lullabies. The album came about really quickly. It was written in 14 days and pretty much recorded in 14 days.

“When you go to record with Steve, you know what you’re going to get,” he says. “You get what you sound like at that moment. For us, that was really important. When bands do well early in their career, it’s easy for outside people to come in and put their stamp on it. Sometimes, you lose a bit of your identity. We were starting all over again with this one. We wrote a song a day. No questions asked. It’s not rocket science. It’s just rock ’n’ roll and punk rock and emotions. I think the quicker you get through it, the better. The more you labor over Flogging Molly songs in terms of the recording, the more you lose a certain energy that was originally in the song. On this album, everything is pretty much as you hear it. There’s an odd fiddle overdub and an odd accordion overdub. Most of the vocals were done from scratch.”

"I was writing the lyrics up until the very end," King says of the track. "Lyrically, it’s not a very uplifting song, but when you mix it with that kind of energy that’s in the room, it’s an anthem in the sense that it’s about what we’re going through at the moment. Every time you go to buy some eggs at the store, you buy a bottle of wine or a six-pack. That’s the way we are right now. It’s a sign of our times unfortunately.”

Below, watch Flogging Molly perform "These Times Have Got Me Drinking" in Kansas City.