Running Thursday through Sunday, the fest was founded by some passionate music fans and musicians from Greater Cincinnati, who were initially just hosting a party. 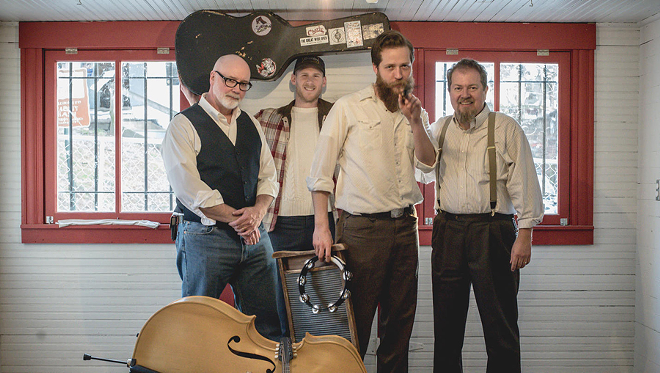 Running Thursday through Sunday, Whispering Beard Folk Festival is entering its 10th year, an impressive milestone for an event that started as a friendly get-together with a few Cincinnati Folk bands playing.

Now held in the small town of Friendship, Ind., about 50 miles west of Cincinnati, the fest was founded by some passionate music fans and musicians from Greater Cincinnati (including Matt Wabnitz of great Folk band Buffalo Wabs & the Price Hill Hustle) who were initially just hosting a party.

“We called it a festival almost as a joke,” Wabnitz told CityBeat in 2013. “It was just going to be a gathering of basically our favorite local Folk groups, a one-night house party.”

When 200 people showed up to the initial Whispering Beard, they realized they were on to something a little bigger. Ten years later, the festival is a marquee Americana event for many fans of the music genre — as well as the artists who play it — and a testament to how grassroots festivals can not only survive but also thrive without a corporate machine running behind them. The festival still owes much of its success to simple “word of mouth” promotion among hardcore Folk and Americana fans — there are none of the big sponsorship deals or costly marketing budgets on which most music festivals are so dependent.

In its intimate and casual setting (camping is encouraged), Whispering Beard presents a lineup that is a consistently excellent showcase of what Americana means. “Curation” has become a silly and overused term, but it seems fitting when looking at the Whispering Beard lineups over the years.

From the start, the Whispering Beard experience has been the draw and key to success, with attendees trusting that the bookings will match up with their sensibilities and likely introduce them to something new and interesting within that realm. Building up and retaining that kind of loyalty and trust is rare and invaluable for a music festival. The Whispering Beard organizers’ understanding of and passion for Americana music in its many forms results in a booking aesthetic that is like a great old-school cassette mixtape a knowledgeable and tasteful friend made just for you that draws liberally from a variety of eras and styles in order to create the best overall listening experience. By comparison, a lot of new-breed summer fests are like the latest Now That’s What I Call Music compilation.

Whispering Beard has booked some eventual big-shot artists before they became must-gets for other events, including Jason Isbell. This year’s Whispering Beard has perhaps the best example: Headlining Friday, Tyler Childers comes to Whispering Beard as one of the most talked about artists in the Americana music universe thanks to his recently released debut album, which is drawing a crazy amount of effusive press. While most Country/Americana fans might be wondering where the hell this guy came from, Beardos (as attendees are known) are intimately familiar thanks to Childers’ appearances at multiple Whispering Beards. The festival has also featured artists on the fringes of Americana, as well as those important to the music’s contemporary history, like Tim Easton (who plays again this year) and Charlie Parr (who is also returning), and some who’ve helped expand the vision of Americana, like Peter Rowan and Paleface.

While Whispering Beard took the humble vision of that first event — with organizers booking their “favorite local Folk groups” — and expanded it in the broadest possible way, the festival remains a dedicated supporter of Greater Cincinnati artists. The area’s consistently robust Americana scene is still at the heart of Whispering Beard. The rise of The Tillers has run parallel to the festival’s; with the widely revered Folk band’s expanding success, it has been holding down headlining slots in more recent years, including for this year’s Saturday night festivities. Other top-notch Cincinnati acts performing at Whispering Beard this year include Frontier Folk Nebraska, Mt. Pleasant String Band, Krystal Peterson and the Queen City Band, Ben Knight, My Brother The Bear, Honey & Houston and Wabnitz’s Buffalo Wabs & the Price Hill Hustle.