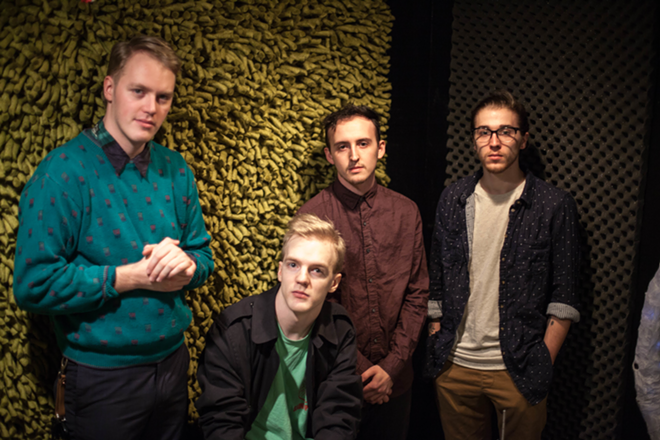 Photo: Jonathan Manahan
The Yugos host a hometown release party for their third album, 'Weighing the Heart,' on Jan. 27 at Woodward Theater.

Next Friday (Jan. 27), the great-and-always-getting-better Indie Rock band The Yugos play Over-the-Rhine’s Woodward Theater to celebrate with their hometown fans. The Cincinnati group’s Weighing the Heart, its third full-length, will get a national release on March 10 through Old Flame Records, an established indie imprint now based in Cincy. But local fans will be able to pick up a copy before the rest of the country at the Woodward show.

CityBeat is honored to premiere a fantastic cut from Weighing the Heart, “Steve French.” The name is based on a gag from Trailer Park Boys, the Canadian cult-classic TV television series that became a film trilogy and now a Netflix show; one of the band members’ favorite moments comes from the 2004 season and involves the discovery of a destructive-turned-stoned cougar which the character Bubbles names Steve French. But that’s the extent of the song’s relationship to TPB’s oddball comedy empire.

“Ironically, (‘Steve French’) is about being human,” the band says in a statement. “We’d like it to serve as a reminder to live life to the fullest despite the problems you’re facing. Cherishing the time you have with your friends and family is really the most important thing.”

The track started as a slow song when singer/guitarist Christian Gough initially wrote the melody and lyrics, but it transformed to its buoyant current state when the full band took it on. That’s fitting considering Weighing the Heart is the most collaborative effort from The Yugos yet, with all of the members contributing to the song creation process.

“It wasn’t until we came together as a group that ‘Steve French’ became what it is now,” the statement continues. “The rhythm section completely changes the feel of the song. Now we like to think of it as our version of the next ‘Party Rock Anthem.’ ”

Listen to “Steve French” below. Warning — after a couple of listens, the song is going to be stuck in your head all day and your anticipation for the new album may turn into an obsession (if you’ve followed the band’s work up to this point and have gone to Yugos shows, you’re probably already there). Though The Yugos don't exactly sound like them but carry the same spirit and vibe, if you dig the giants of Indie Rock like Arcade Fire, Built to Spill and Modest Mouse, this should be your new favorite song.

Old Flame Records main man Rob Mason (a former intern at the legendary WOXY radio station) has re-embraced the Cincinnati music scene since returning to the area and headquartering the label in the Queen City. Old Flame has put out several releases from local bands since Mason moved back from New York, including Dawg Yawp, Frontier Folk Nebraska, Harbour and Automagik, but The Yugos were actually one of the very first to catch his attention.

“The first concert that I saw when I moved back to Ohio from Brooklyn was the Surfer Blood show at Fountain Square a few years back,” Mason says. “The Yugos and Automagik were both on the bill. I remember just standing in awe as The Yugos shredded through their set. They looked like they were having the times of their life and were at home on stage.”

After seeing the band a various shows since the Fountain Square gig (including dates with another Old Flame band, Keeps), Mason had become friendly with Gough. As the group was plotting out its third album release, an Old Flame/Yugos hook-up just made perfect sense.

Or as Mason puts it: “He asked if I'd be interested in releasing The Yugos LP — how could I say no?”

With the expanded exposure — and if “Steve French” is indicative of the rest of the LP — Weighing the Heart is primed to draw some big attention to The Yugos and a bright spotlight is very much deserved. While some acts require dedicated schmoozing, aggressive sales pitches and borderline stalking to obtain the right inside connections to advance their burgeoning careers, The Yugos is one of those bands that already has everything necessary to move up the music-world ladder. Though just being great doesn't always do the trick (and I know working up a buzz often involves at least some extracurricular hype maneuvering), the band merely needs to get its music heard (by music lovers, blogs and press outlets, radio people and other industry folks and tastemakers) and let word spread in order to transition its local success to the national stage. To know The Yugos is to love their music.

CityBeat’s Brian Baker recently talked to The Yugos about the sometimes bumpy path to recording and releasing Weighing the Heart (much of the first recording of the album was scrapped after The Yugos spent time on the road playing the new songs, only to return and realize that many of the tunes had gotten better as a result of the road-testing) and how the experience has helped them grow as people and as a unit. As with many other types of relationships, members of very dedicated bands that want to take its music as far as it can go inevitably spend a lot of time together, from writing songs, rehearsing and recording to spending endless hours in close quarters while on tour. Luckily, instead of letting interpersonal issues grow and ultimately erupt — possibly to the detriment of what they’ve worked so hard for if a breakup is the end result — The Yugos recognized the problems and addressed them before it was too late.

"We had struggles as friends and as a band," guitarist Jeremy Graham told Baker. "For myself personally, it was like weighing the heart. Am I doing what I need to be doing for my friends? Am I keeping up with what I want to be doing in this band and what I know they want to be doing? This album got deep."

"We had to have a band-in-crisis meeting," drummer Jordin Gough explained. "We're like, 'We don't communicate with each other and we internalize everything.' We'd talk to someone in the band about what someone else in the band was doing. So it was like, 'I think this shows that we all love each other. If we don't like an idea, it doesn't mean we don't like you.’ ”

Instigating a sort of self-run group therapy session turned out to be vital. Though an ongoing process, the resultant blunt honesty and improved communication between the musicians helped right The Yugos' ship, allowing them to focus on their shared goals.

Be sure to check out CityBeat next week for more from Baker’s interview with The Yugos in advance of the big hometown release show on Jan. 27.