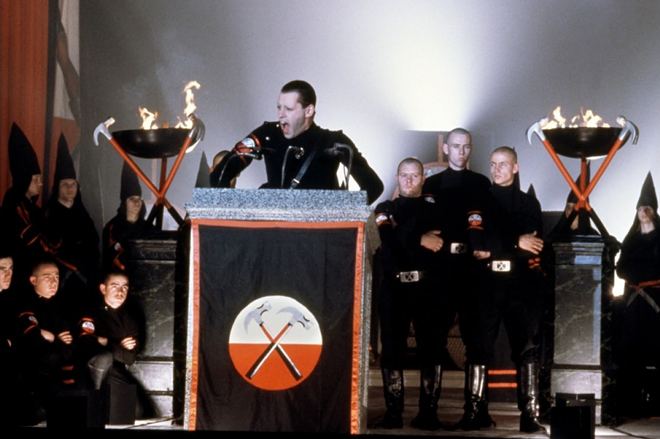 Scene from the film based on Pink Floyd's 'The Wall.' Nope, don't see a trace of politics. This appears to be some sort of carpenters' convention, based on that classic Pink Floyd song, 'Another Brick in That Beautifully-Constructed Wall-Like Structure (Part II).'

Roger Waters kicked off his “Us + Them” tour recently and, as expected, the concert included a lot of political commentary. Well, “as expected” by anyone familiar with Waters and a big, important chunk of his Pink Floyd’s discography. Reports from the tour’s opening dates said that several audience members were so outraged by the flood of anti-Trump imagery and messages during the show, they walked out. Google is hard sometimes, but you’d think someone paying to see Waters would have heard a song or two.

Perhaps Waters should have done what Todd Rundgren did and offer a flagrant warning to thin-skinned fans. After drawing lots of “I used to like you, now I hate you” fire from social media after telling an interviewer that Trump fans should not come to his shows, Rundgren went into the belly of the beast — Fox News — to play a video shown during his sets that mocks Trump and his team and has reportedly led to some arguments amongs fans. The host, richly, accused Rundgren of “discrimination.”

Everyone knows the liberal elite industrial complex destroys anyone expressing a conservative opinion. Just ask Tim Allen (but not Tom Selleck, who still has a TV show and therefore ruins the argument). A pair of Hard Rock heavyweights are likely “on notice” after recent comments. Glenn Danzig told fake-news outlet The Los Angeles Times he was cool with Trump’s “travel ban” (which isn't a "travel ban"), but earned points back by saying he is pro-choice… then promptly lost those points by saying he wasn’t cool with Planned Parenthood selling baby parts. Meanwhile, Maynard James Keenan said a few words in concert that at least got the libs reaching for their SJW armor. The Tool singer praised law enforcement and the military for defending the rights of “whining, entitled snowflake assholes,” but seemed to include himself in that group. He ended his speech on a note of unity, though, so he’ll probably at least only be put on the “we’ll-end-your-career” watch list.