Multimagic Comes Back from the Brink with a New Line-up and the Band's Long Anticipated Debut, 'Manic Daze' 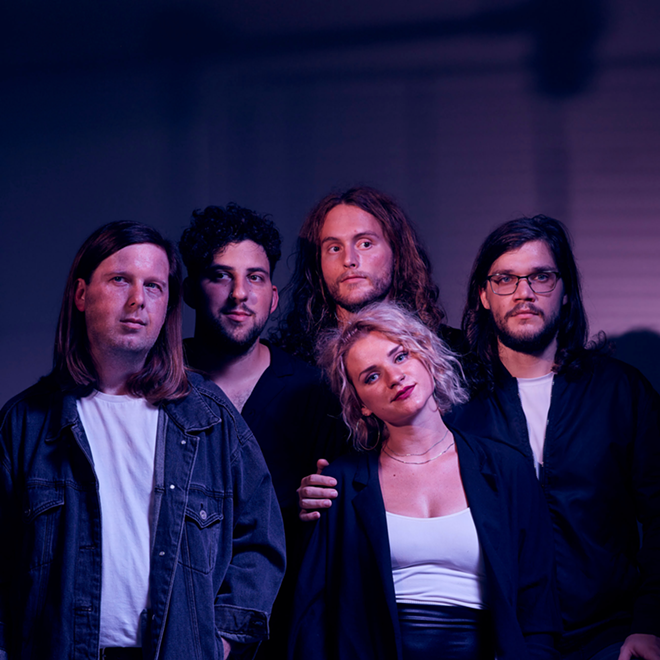 By virtue of their fast start, it feels like Multimagic should be celebrating their sophomore album and thinking ahead to gigging and writing toward their inevitable third release. Instead, the band’s frontman/founder Coran Stetter endured medical setbacks and his original line-up’s dissolution, followed by Multimagic’s organic rebirth and the recording of their aptly titled debut album, Manic Daze, just in time for the coronavirus pandemic.

“Our guitarist Jimmy (Ruehlman) gave us the idea,” Stetter says. “He said, ‘Flaming Lips put out an exclusive vinyl 7-inch last year. Why don’t we put out exclusive vinyl and it’ll buy us time to figure out the digital side.’ So that’s what we did.”

New keyboardist/vocalist Meg Kecskes says, “We almost canceled it because we couldn’t do (a) show, but looking back to artists that held back their releases, I think they regret it now. That’s what people needed more than anything during this quarantine: new music.”

Multimagic launched in 2014 as an outgrowth of Stetter’s band affiliations. Initially a true solo project, he searched for band members but came up empty. Around that time, Stetter heard producer Eric Tuffendsam’s work as an artist and contacted him; their subsequent conversation led them to collaborate.

“We had the idea that we should take one song into the studio, get some musician friends to learn some parts and figure out what we wanted this band to sound like,” Stetter says. “The result was the song ‘Let Go,’ which I put out on May 13 – 5-13 – through Cincy Music when they were doing their Download of the Week thing.”

By year’s end, Multimagic solidified its lineup with high-profile local luminaries Sebastien Shultz (ex-Bad Veins) on drums and Mia Carruthers (ex-Curtains) on bass and vocals. Based on the buzz around “Let Go,” then in regular rotation on WNKU, Multimagic booked two successful MOTR Pub shows and was among the handful of Cincinnati bands asked to play the Bunbury Music Festival in its inaugural year under new owners PromoWest. By a stroke of good fortune, Multimagic wound up playing for 2,000 people at one of the big Yeatman’s Cove stages, sandwiched between Wussy and Father John Misty.

Similarly fortuitous programming resulted in a big crowd at the MidPoint Music Festival three months later. Multimagic’s local presence grew exponentially, and they gained industry notice at SXSW and CMJ showcases. As Stetter and the band began working up material for what was intended to be their first album, Multimagic’s progress stalled as the band prepared for Shultz’s destination wedding.

The big blow came early in 2017. Stetter went to a clinic for a chronic cough and was diagnosed with bronchitis and prescribed a combination of prednisone and codeine. Stetter’s devastating reaction to the medication triggered a serious manic episode that escalated into a near psychotic break; his girlfriend and her parents, both former Navy medics, determined that he should be hospitalized.

“They called my parents and they came over and they all went downstairs to talk,” Stetter says. “I was in the kitchen with their dog. I heard the dog. We talked.”

Stetter’s recovery was slow; in addition to coming down off the medication — he had never used drugs recreationally and was at best a light drinker — he also suffered Post Traumatic Stress Disorder-like symptoms from a hospital incident where a transport officer applied a law enforcement control hold during his agitated state and threatened to break his arm if he didn’t comply.

Time and therapy eventually brought Stetter back to an emotional place where he could continue his musical pursuits, but by then the band members he painstakingly assembled had found other projects. In late 2017, the last vestiges of Multimagic told Stetter he should move on without them.

Stetter quickly realized his new songs reflected the aftermath of his manic period and were, in a very real sense, an important therapeutic recovery tool. At the same time, Stetter began informally jamming with friends — guitarist/vocalist Ruehlman and drummer Evan Brown — and sowing the seeds of Multimagic’s next iteration.

“Once it was confirmed that the old line-up wasn’t coming back, I came to Jimmy and Evan and said, ‘I really enjoy playing with you guys, we’ve got these new songs that are about my manic episode,’” says Stetter. “Should this be Multimagic now?”

Among the last to join was Kecskes, whose voice is an amazing texture in the new Multimagic, a perfect blend with and counterpoint to Stetter. She was recruited by friend and workmate Brown and she had a particular affinity for Stetter’s contemplative songs; she’s had experience with mental health issues and easily identified with the material’s emotional core. She also understood the psychology of people’s reaction to Stetter, who was AWOL for weeks after his hospitalization.

“You have all these people who you knew and were in your life and they don’t know how to treat you,” Kecskes says. “A lot of people keep that person in isolation almost out of ‘protection,’ because they don’t want to freak them out. I think the society that knew Coran felt it was best to not reach out to him, and that was keeping him from getting back into normal life.”

Multimagic fell back into place with bassist/vocalist Anthony Maley being the last piece of the puzzle, and Stetter brought in songs that predated his medical issues — some going back to the band’s original version. They tweaked the old songs that complemented the new ones, and ultimately collected 10 solid tracks for Manic Daze, produced as intended by Tuffendsam and bristling with the muted joy and dark abandon of ‘80s Synth Pop and contemporary Indie Rock.

Soul Step’s Melvin Dillon, a fan since the MidPoint show, released Manic Daze on vinyl back in April; the album was teased in January 2019 with the track “Dreams” and a physical 7-inch later in the summer backed with the song “Sunshine” to promote the band’s comeback show at the Woodward Theater. The album’s vinyl release was designed to tee up local gigs and regional touring this year, but the pandemic derailed all that. Stetter decided to hold the full release of Manic Daze until later in the fall; it dropped Sept. 4, having already garnered stellar reviews for its vinyl version.

Manic Daze wasn’t the only positive to emerge from Stetter’s meltdown: One of his medication-fueled plans was to raise millions of dollars to save WNKU, the sale of which had been announced during his manic phase. The ultimate outcome was the more feasible creation of local independent Inhailer Radio, conceived and launched in 2018 by Stetter and Taylor Fox.

All things considered, Stetter is in a great place at the moment, pandemic notwithstanding. His girlfriend is now his fiancée, Inhailer just celebrated three years on the air, he’s revived Multimagic with a cohesive and committed new line-up and they’re not only looking forward to promoting Manic Daze, they’re also eagerly anticipating their sophomore album and their new-old band’s bright future while celebrating the journey that brought them all together.

“I feel like this record is about Coran writing about his experience and how we all came together to relate in our own personal ways, about getting to know yourself through a hard time, and then getting back up,” Kecskes says. “As far as the next record, we feel strong and together and now we have this newfound confidence in ourselves and each other that I think is going to come out in the next cycle.”

Multimagic’s debut album Manic Daze is available on vinyl at Soul Step Records via soulsteprecords.com and available to stream on all platforms. Learn more at multimagicband.com.