Singer Eric Davidson reflects on NBT's legacy, which began in the early ’90s with the Garage Punk classic '!!Destroy-Oh-Boy!!' 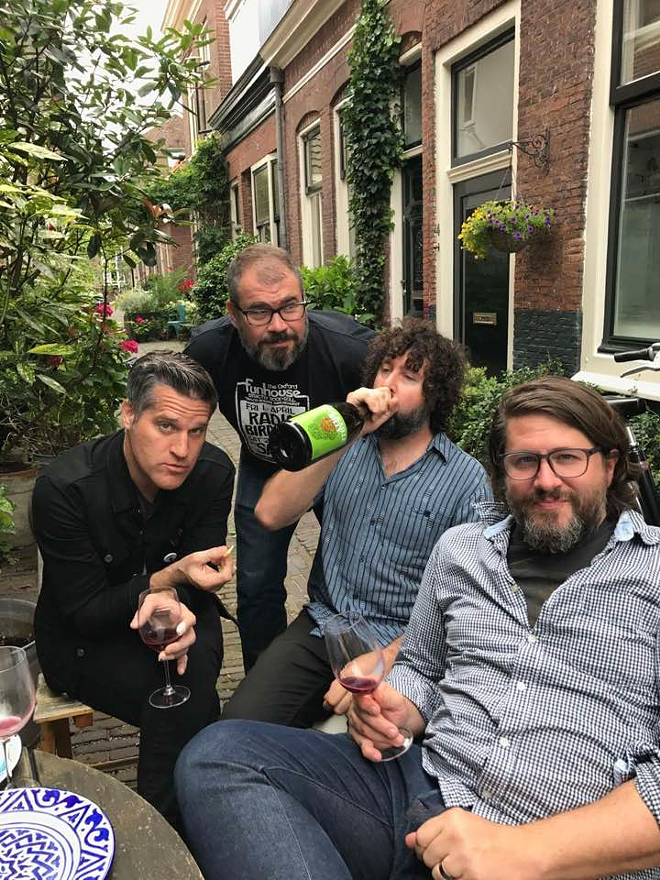 Provided
New Bomb Turks
New Bomb Turks first roared out of Ohio’s own college-centric capital city in 1990, making its mark with an amped-up sonic storm — a tornado of loud, no-frills Rock & Roll served up with an undeniable penchant for twisting bare-bones guitar riffs into a frantic and careless racket. It got burped out as brash Garage Punk and — not that they took time to notice — the Turks unwittingly drafted a fresh page of Punk Rock history in the process.

They’d go on to release eight albums, a compilation LP, three EPs and more than 20 singles over the course of a decade. In doing so, the Turks paved the way for a litany of late-’90s Garage Punk outfits to find Rock radio success in their wake.

But while mainstream fame on that level eluded the Turks themselves, they were (and still are) regarded as preeminent members of an underground garage-band society devoted to preserving Punk’s original primal flame, staunch supporters of Rock’s early raw roots — the stuff that made the music seem so dangerous and carefree in the first place.

In the cultural context of their primary years, the Turks’ brand of Punk was a no-brainer alternative to the prevailing Pop Punk winds of the ’90s. But that didn’t keep them from occasionally being shuffled in the same deck.

Singer Eric Davidson recalls the time Offspring singer Dexter Holland called them to discuss recording for his label. “After a nice chat for a bit, the topic of the Blues and Rockabilly came up,” he recalls. Holland apparently dismissed both as irrelevant to Punk Rock’s past, a deal-breaker for the roots-reverent Turks. “That should tell you where our sound fell on the spectrum of that idiotic, early ’90s ‘neo-Punk’ trend,” Davidson says, with a more than a hint of cavalier cool.

Cincinnati’s own Andy Slob —a notable ’90s Punk recording engineer also known for his time with sloppy, crash-pad commandeers The Slobs — spent plenty of time doing shows with the Turks and is quick to point out other ways the Turks stood out.

“The one thing that I've always liked about New Bomb Turks was that the lyrics avoided the 'typical' Garage Rock BS … obviously (a reflection of) having their toes in literature, art and other such things,” Slob says.

As for their sound, the New Bomb Turks ramble was borne of equal parts obsession with vintage Garage Rock nuggets and the sleazy Hard Rock radio riffs its band members were raised on. It soon shot out of PAs around the world with a glorious blast, and the band had no problem following up on the promise and hype they generated right out of the gate.

It was a tough act to follow. Matt Becher of Cincinnati’s own Garage Punk greats The Mortals recalls a gig they shared with the Turks, in Columbus back in 1992. “(New Bomb Turks) went first and played to an enthusiastic home crowd,” he says, “which emptied out before we went on.

“The stragglers looked bored to tears,” he adds, which is saying a lot for a notoriously unhinged live act like The Mortals.

“They packed the place,” Mortals guitar guru Bill Grapes adds. “The room was jumping — (then) they finished and half the room left.”

“Good times,” Grapes says with a laugh. “They were explosive live.”

Gig after gig, the Turks set proverbial fire to a manic Stones-by-way-of-The Ramones take on rhythm-and-bruise being chucked around by a growing legion of like-minded libertines, including other underground Garage Punk acts like Lazy Cowgirls, Cheater Slicks and The Fluid.

Thirty years on, glory be unto us, the Turks continue to launch belligerent, reckless and rambunctious musical blitzkriegs, one club or festival show at a time, to the giddy delight of Garage lunatics the world over.

“The shows have been great!” Davidson enthusiastically reports from the road. “Better than expected from my end (because) you never know how the ankles/pipes/liver will hold up. And we haven't done consecutive shows in a long time — usually just a couple shows at a time, or a short Euro fest jaunt.”

The last time Davidson and I spoke, the year was 1994, and he was fresh off stage at Dayton’s Hara Arena. The Turks had just performed a blistering set to kick off a lineup that included The Breeders, Afghan Whigs and Guided By Voices — a one-off show that became the stuff of legend for fans and supporters of Ohio’s ’90s Alternative Rock scene.

The Turks had only put out their debut LP the year before. !!Destroy-Oh-Boy!! was released by no less than Garage Rock kingmakers Crypt Records in 1993 (regarded by many as their magnum opus, it received a 20th-anniversary deluxe reissue in 2013). Destroy’s collection of rapid-fire anthems for a bored and distressed Midwest is now regarded as a modern-day Punk classic, a gnarly dispatch comprising 20 tunes recorded as they were ground out in a New York studio over just half as many hours.

After its release, national press took notice, quickly. Alternative Press even went so far as to advise, “punk bashery and destructo-rock (have) found fresh voices… melded into a seamless new terror all its own.”

Slob himself recalls the impact of his own first Turks experience. “(Punk rock bible-’zine) Maximum Rock n Roll reviewed (Destroy), comparing it to Little Richard and/or Jerry Lee (Lewis),” he says. “I remember thinking, ‘This is biggest endorsement of an album that I've seen in this magazine.’”

It was only a hint of the acclaim to come; today, some consider it the best Punk album of the ‘90s.

“Up until about six months after Destroy came out, our hopes and plans only went about three months into the future,” Davidson says. “I think we all sorta thought it was amazing that Crypt — (our) absolute favorite label ever — asked us to do an album. Then, nice reviews came in and the first real tour we did (54 shows in 60 days in Europe) went really well.”

“Plus,” he continues, “we really did work it. We had already done lots of East Coast and Midwest weekend swings by then and, in 1993, were getting out to the West Coast and South too. People said we seemed ‘ambitious’ — but, of course, ambition in the Columbus, Ohio music scene at that time meant waking up before noon and getting a few fliers up on telephone poles at least a day before the show.”

After releasing Destroy’s flawless follow-up, Information Highway Revisited, Crypt gave the Turks encouragement to find a new home, one that could help them keep up with the demands of record stores and a rapidly growing fanbase. “Of course, we'd listen to any sucker who'd want to spend money on us,” Davidson says. And so the calls came ringing in.

Eventually, Epitaph Records, high on the hog from its crossover success with acts like Rancid and The Offspring, flew the brazen Turks out to the West Coast to talk turkey.

“We didn't like 95% of what Epitaph put out,” Davidson says. “But they had a good rep as far as how they treated bands, worldwide distribution and (they) had some cash to expand the label a bit. And they’d signed the fucking Cramps! Not to mention Red Aunts, Gas Huffer and Zeke, bands we actually liked.

“Basically, Epitaph did what they said they'd do. Epitaph offered us about five years’ advance money, good distribution and better promotion.”

The tours, albums and years flew by as the decade dragged on and, in 2002, things came to an end for the band — for the time being, at least. Davidson cites typical band-breakup issues for the decision.

“You kind of hit a wall, spin wheels,” he says, looking back. “I was feeling a need to move on.”

And so the members of New Bomb Turks did just that. Davidson, now living in New York, even wrote a 2010 memoir of sorts, digging into the mostly ’90s Garage Punk scene. The excellent We Never Learn: The Gunk Punk Undergut, 1988-2001 reeks of stale beer, closed-down clubs and a subculture that was beginning to grow beyond its traditional boundaries.

Requests to perform live are tough to turn down, when the mood strikes. “Invitations to European festivals are hard to say no to,” Davidson says, alluding to the benefits that go along with paid-for international travel. “And it feels great to do the occasional reunion show and see old friends.”

That brings us to the here and now, three decades since the gang of Ohio fiends first convened to try playing some Rock & Roll first-hand. Davidson sounds humbly proud of the Turks contribution to music.

“I'd like to think we tossed some energetic punk onto the pile,” Davidson surmises.

“Most of the bands we were compared to early on — The Saints, Dead Boys, The Pagans, Lazy Cowgirls, Dwarves — they never got huge (or) had big his. Why all of a sudden would we? I was aiming to prove you could keep a high energy act going for longer (than they were able to) and I think we did that.”