The Baron’s influence is deeply felt within Cincy’s Jazz community, but reverence for the drummer transcends genre 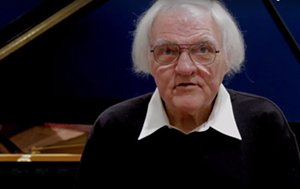 John Von Ohlen discussing his compositional album, 'The Pond,' which was released earlier this year.

On Wednesday (Oct. 3), Cincinnati music lost a legend. Jazz drummer/bandleader John Von Ohlen died after battling various medical issues over the past few years. He was 77.

Von Ohlen was born in Indianapolis, but his role as the figurehead of the Blue Wisp Big Band — which he co-founded in 1979 (the first show was in January of 1980) — helped cement his status as an icon of Cincinnati music. Before the Big Band, Von Ohlen made his name as the drummer in the bands of Woody Herman and Stan Kenton, who gave him his nickname, The Baron. Von Ohlen also worked with artists like Mel Torme, Steve Allee, Keith Jarrett, Tony Bennett and Rosemary Clooney (among many others) throughout his illustrious career. Fellow local Jazz legend Cal Collins' early job offers first led Von Ohlen to the Cincinnati music scene in the late ’70s.

His local presence with the Blue Wisp Big Band and as an instructor at University of Cincinnati’s College-Conservatory of Music helped Von Ohlen become a mentor/ombudsman/elder statesman within the Cincy Jazz community and ensured that his legacy would be felt, seen and heard in the generations of musicians to come. And that legacy is literally on display every week for music lovers to experience in person — on Wednesdays, the Blue 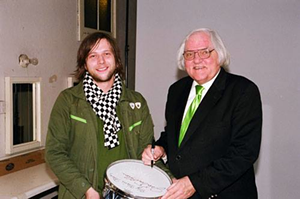 Patrick Keeler gets his snare signed by The Baron at the 2005 Cincinnati Entertainment Awards
Wisp Big Band (which continues to maintain a membership of veteran musicians and younger players) plays Caffè Vivace, while a more recent Baron-founded big band — Baron Von Ohlen and the Flying Circus Big Band — plays Mondays at The Greenwich.

But Von Ohlen's upper-echelon musical skills also made him a hero beyond Jazz circles.

A first-year inductee into the Cincinnati Jazz Hall of Fame and also a member of the Indianapolis Jazz Foundation Hall of Fame, CityBeat inducted Von Ohlen into the Cincinnati Entertainment Awards Hall of Fame in 2005. At that year’s CEA ceremony at the Taft Theatre, drummers from seemingly every corner of music (including Patrick Keeler of The Greenhornes/Raconteurs/Afghan Whigs fame) sat and watched in awe as The Baron performed a set with longtime colleague Steve Schmidt and other local Jazz greats.


The breadth and depth of Von Ohlen’s influence could be found on social media, as fans and musicians of every stripe talked about what the drummer meant to them. Pianist/composer Pat Kelly wrote, “John Von Ohlen came to Cincinnati in 1978 and changed things… One of the world’s most renowned big band drummers settled here and graced the jazz scene for 40 years.” Schmidt wrote of his old friend, “Of all the things to be said about John, the big thing in my mind is that he was his own man. He was more himself than anybody I can think of. He knew himself and therefore was able to be transparent, open and totally honest with the world and with everyone. And that’s why he played the way he did.” Karin Bergquist of the veteran Cincy band Over the Rhine said, “Rest In Peace John Von Ohlen. Thank you for sharing your gift. You were truly one of a kind.”

In an interview with CityBeat before his CEA Hall of Fame induction, Von Ohlen expressed appreciation but lightheartedly noted that he wasn’t ready to hang up his sticks just because of the honor.

"There's a little trepidation because I feel like I've got quite a few years left," he said. "On the other end, it's a super 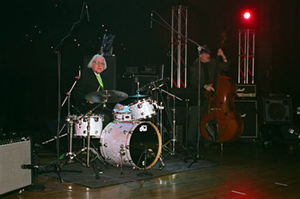 John Von Ohlen at the Taft Theatre performing after his induction into the Cincinnati Entertainment Awards Hall of Fame
honor, and I accept it happily. Anybody gets a lifetime award, they think, 'Here's your gold watch, you've done your bit, now move over.' I don't feel that way. I feel like playing. As long as I've got my fingers in a good big band, I'm happy."

Here is an interview with Von Ohlen about his recent piano compositional project, The Pond. The album was released earlier this year and is available on most major digital music platforms (stream it on Spotify below).