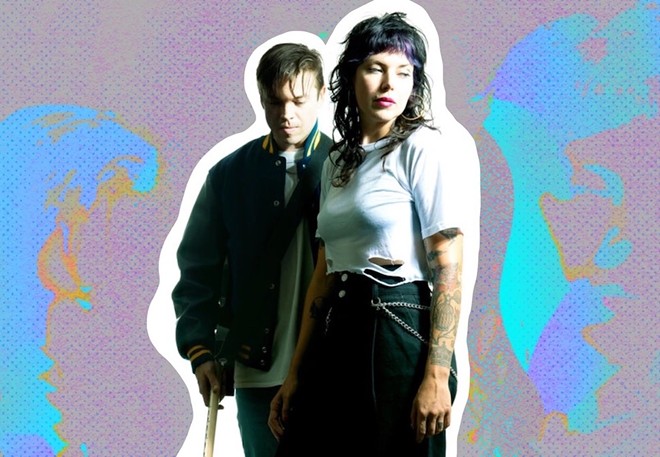 The cover of Sleigh Bells’ most recent album, 2021’s Texis, features a black-and-white image of singer Alexis Krauss at age 11. She looks directly into the camera as if posing for a school photo and sports a slightly mischievous smile, a bob haircut and a twinkle in her eye, as if she knows far more than she should. It’s a curious visage, at once innocent and oddly subversive – a fitting encapsulation of what Sleigh Bells has perpetrated on listeners for more than a decade now.

Krauss and guitarist Derek Miller founded the band in Brooklyn, N.Y., in the late aughts as an alternative to neighborhood’s indie rock brethren — massive, hooky songs driven by Miller’s crunchy riffs, a booming drum machine and Krauss’ voice, a modest but cutting soprano. Miller is the main songwriter, a crafter of noisy anthems informed by everything from pop culture detritus to more personal elements. But don’t think Krauss isn’t a vital part of the process.

“I write all the lyrics, but Alexis does have all the freedom in the world to arrange them however she sees fit,” Miller said in a 2021 interview with Paste Magazine. “And I am usually blown away by the way she does it, because I’ll send her something, just a block of text, and she’ll pick out the chorus and say, ‘This is the verse.’ While in my mind, it was actually the inverse, so that’s actually my favorite part of the process. I mean, writing is a blast, but then hearing what she does with it is the most exciting moment for me.”

There’s a clean, almost surgical, element to the duo’s music — the synth stabs and snappy drums that open Texis’ first song “SWEET75” bring to mind the soundtrack to a glitchy video game. Then a sticky Miller riff and Krauss’ vocals kick in as she insists, “Here we go, here we go/You’re legitimate rock and roll.”

Sleigh Bells’ overblown tunes are just as large in a live setting, as the imposing Krauss stalks the stage front and center while Miller, a drummer and a keyboardist/backing singer heighten the studio efforts just by their human presence.