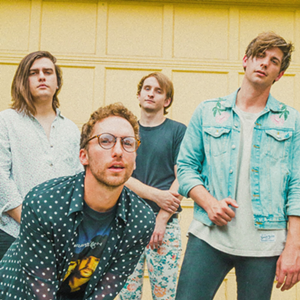 Photo: facebook.com/theorphanthepoet
The Orphan The Poet

The music scenes of Dayton, Ohio and Cincinnati are eerily similar. They both have very diverse band cultures, and they've both produced acts that have built loyal fan support at home and then gone on to replicate that success outside of the local safety net. In the Emo/Pop/Punk and Post-Hardcore realms, the Gem City can point to Hawthorne Heights and Mother May I as examples of hometown kids made very good.

Their successes have been inspirational to similarly wired local bands, particularly The Orphan The Poet, a quartet whose infectious, energetic sound has been compared to groups like Manchester Orchestra, Further Seems Forever, Thrice and Weezer. None of the members of TOTP — guitarist/vocalist David Eselgroth, guitarist Dakota Johnson, bassist Jake Floyd and drummer Sam Gordon — are Dayton natives (and Columbus is currently listed as the band’s headquarters on social media now), but the group was formed after each gravitated to the city and their natural chemistry has kept them together for nearly a decade.

The band's debut EP, 2009's In Brevity, was a mature and expansive first work for a young band, relying on acoustic subtlety and electric bombast in appropriate measures. TOTP's sophomore EP, Translating, followed in 2010, and the band supported both releases with a relentless tour schedule, picking up opening slots for a broad spectrum of their peer group. That admirable work ethic kept the band perpetually road-bound, but also kept it out of the studio for close to six years. When the musicians finally returned with 2016's Terrible Things, the raw talent that was evident on early recordings had been forged and hammered into a familiar but more muscular sound that still benefits from knowing when to glide and when to hit the thrusters.

The Orphan The Poet's band-of-brothers camaraderie was a saving grace several months ago when the group’s tour van was broken into and the members lost all of their personal belongings. The subsequent torrent of financial and emotional support from family, friends and fans (and aren't they all the same thing in the Big Book of Rock & Roll?) got them through the crisis. As Eselgroth explained in a newnoisemagazine.com interview, it was both his worst and best band experience, as it hammered home the reality of how important their music in people's lives.

The quartet's latest single, “Still Buzzin',” was released last October, and it has the hair-raising, ass-shaking, fist-pumping potential to be a breakthrough hit if given the right exposure. It’s had a good start — “Buzzin’” has scored some good radio play (including spins on BBC 1 and Sirius XM’s Alt Nation) and gotten a boost from official playlist adds on Apple Music and YouTube.

With I The Victor, One Day Steady, Colly, Beloved Youth and Xzela & Luna Bruja. Click here for tickets/more show info.