CityBeat called up guitarist Christian Bland to discuss everything from the band’s mottos for living to his thoughts on digital music. 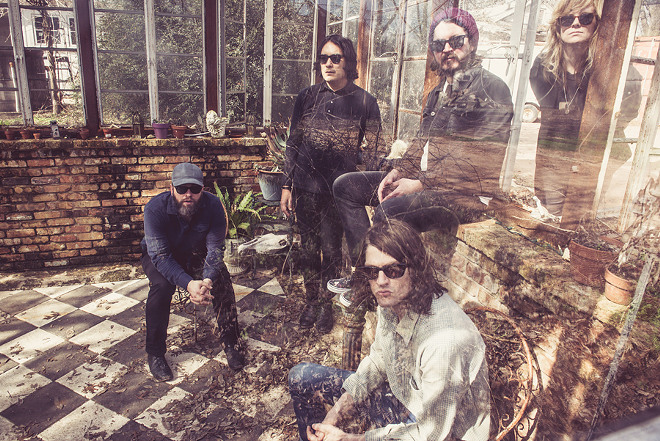 Photo: Sandy Carson
Austin, Texas’ The Black Angels continue trying to open minds on new album, 'Death Song.'
The Black Angels are a perfect fit for our current ominous, cloud-gathering cultural moment. The Austin, Texas-bred outfit has been spreading its reverb-drenched drones for 13 years now, along the way converting a flock of passionate followers who likewise believe that The Psychedelic Sounds of the 13th Floor Elevators was Rock & Roll’s creative apex.

The Angels’ fifth album, the recently released Death Song, continues the fivesome’s trip down the psychedelic rabbit hole. Take “Currency,” the album’s epic lead track, which opens with ambient sound and a solitary guitar strum before kicking into gear via a swirl of heavy riffage, death-march drumming and singer Alex Maas’ high-pitched plea that “one day it will all be over!” The effect is both disorienting and deeply satisfying, transporting the listener to a different headspace within a matter of moments.

CityBeat recently touched base with guitarist Christian Bland via an appropriately fuzzy cell phone connection to discuss everything from the band’s mottos for living to his thoughts on digital music.

CityBeat: A lot of people are talking about Death Song as this reaction to the cultural mood of the moment, but the album is pretty similar in tone as your previous stuff. That said, do you guys go into a new project with a specific idea or theme in mind or is it a pretty organic process?

Christian Bland: Oh, man, it’s very organic. We think that’s the beauty of every record we put out. We don’t have a direction we’re trying to go, we just let it show us the path. We never force anything. My dad always asks me, “So what is this record going to be about? What are you writing about this time?” And I’m like, “Well, I don’t know. We’ll see where it goes.”

Everybody thinks this new record is about the new presidency and everything, but it just happened to be about that — it wasn’t forced or anything. That’s where it went. The songs were written over a three-year period from 2014 to 2017. Most of them were written in 2014. It just so happened that Trump is the president right now. (Laughs.) The songs sound like they were about that whole situation, but they were written way prior to the campaign and election.

CB: What is it about Texas, and Austin in particular, that breeds such strong bands?

CB: Well, Texas is so conservative, and Austin is the exact opposite. Austin is the backlash, the rebellion against the conservatism. You have to have equal and opposite reaction to everything, and that’s what we are in Austin — a reaction against that. We’re trying to open people’s minds.

CB: Along those lines, I was looking at your Facebook page the other day and there was a post that encouraged your listeners to “create other methods of survival.” What did you mean by that?

CB: The Black Angels, our whole thing is that we want you to reject your preconceived notions, question authority and find ulterior methods for survival. Those are our mottos. It’s all about opening your mind and letting everything come through like the 13th Floor Elevators talked about. That’s our approach — we’re trying to open people’s minds.

CB: Do you feel a responsibility to speak up in an overt way about what’s going on politically, or would you rather just let the music speak for itself?

CB: We are speaking up, and we’re letting the music do that. Like I said, we’re the backlash against the situation that’s going on in the entire world, not just in the United States. Everything’s gone wrong in this world. It’s a messed up place, so our record is a manual for people to open their eyes and see what’s going on. If somebody came to this planet having no clue what was going on, they could listen to Death Song and it could be their manual for living. It’s kind of the opposite of the title — we encourage people to live life to the utmost.

CB: I noticed you guys put out a deluxe version of the new record that has glow-in-the-dark vinyl and a cover that reveals something when you shine a black light on it. In this age of the digital, why are you interested in creating these elaborate, often interactive physical objects?

CB: I studied advertising and graphic design in school. My main focus is on the tangible product. I designed all the album covers. It’s important for me to create something that you can touch, grab, feel, put onto the record player or put into a CD player in your car. I’m a big proponent of that. I don’t like the streaming situation very much. I think it’s crap. When you have the actual object you become more involved with it.

CB: I’ve noticed a definite flow and journey to the sequencing of songs on the new album. Is that something you guys think about a lot?

CB: Here’s a little insight into how the flow of the record goes: Our first record, Passover, we tried to do the flow of the first Doors record and we went back to that same approach. If you look at this record, it kind of flows just like The Doors record does, so like the first two songs kind of blast into your face and the third song takes a step down. And our last song, “Life Song,” is kind of like “The End,” so we used The Doors’ first record as a kind of template.

CB: Speaking of “The End,” you guys have always had this kind of dark, ominous, almost sinister aspect to your music. Where does that come from?

CB: I don’t know, man, I guess I’m just drawn to such things as that. Like Alex and I used to sit around and put Apocalypse Now on mute and play to it and try to score it. I guess that kind of vibe is appealing to us. We’re all very happy people, but our catharsis is in the ominous, I guess. Maybe we’re all just dead soldiers come back to life?

CB: I read that your dad was a preacher. How did that impact what you do as a musician?

CB: Yeah, he was a Presbyterian preacher. Well, The Black Angels wouldn’t exist if I weren’t a preacher’s kid, so I’m lucky. It’s definitely influenced everything I’ve become.

CB: Do you think music can be seen as a form of religion?