The new version of the plan creates 200 "flex" spots open to the public during the day. 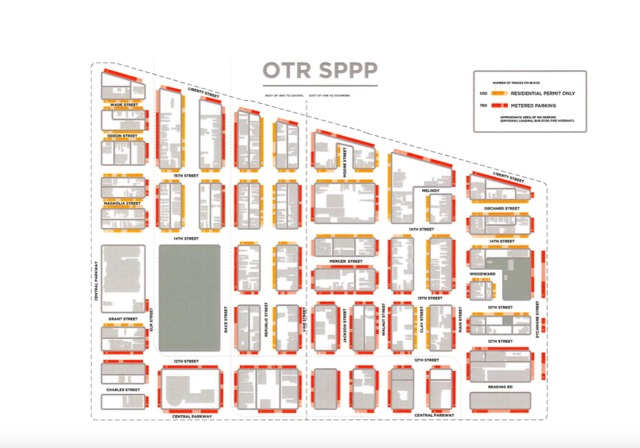 Cincinnati City Council today passed a revision to its residential parking permit program in Over-the-Rhine that sets aside 200 spaces around the southern half of the neighborhood as "flex" spaces — spots that will be open to the public from 9 a.m. to 5 p.m. but reserved for permit holders during the evening.

The move comes after complaints that the original permit program, which was designed to make parking easier for residents in the bustling neighborhood, has made it more difficult for those who work in and visit the neighborhood.

Under that plan, the city sold an uncapped number of permits for OTR residents south of Liberty Street. The regular rate for those permits is $60 a year — down significantly from the original proposal of $150 a year. Low-cost permits are available to residents of subsidized housing at $25 a year.

Five hundred of the 1,290 spaces in the neighborhood are permit spots. The spots are needed, city administration says, because OTR has become increasingly popular as a destination.

"Since 2003, the City of Cincinnati made concerted efforts to revitalize Over-the-Rhine," reads a memo from Acting City Manager Patrick Duhaney about the plan. "A combination of public and private investment has brought residents, businesses and amenities to the neighborhood… the success, however, has created new conflicts. With more people choosing to live, visit or work in OTR, parking spaces are at a premium."

So far, OTR residents have purchased about 600 permits.

Parts of Clifton, Columbia-Tusculum and Pendleton already have permit programs. Those cost $30 a year.

Some local business owners say their employees and customers have had a harder time parking in the neighborhood since the OTR permit plan came online. At least 1,600 people work in the neighborhood, according to the OTR Chamber. Moreover, some say there are a number of residential spaces left open during the day.

"The recent changes to parking, the special permit program and the continuing rollout of meters all over Over-the-Rhine has caused some massive problems for us," said Taft's Ale House's Ryan Blandford. "Beyond the concerns of our staff just trying to findparking, the pay parking we have access to is unaffordable.”

But council members who support the permit plan say they need to preserve some parking in the neighborhood for those who live there. Council member Chris Seelbach argues that many who live in OTR are low income, and often struggle to find parking spaces due to the increased number of visitors to bars and restaurants there.

"Residents have been working on this residential parking permit plan for five years," Over-the-Rhine Community Housing's Mary Rivers told council earlier this week. "In that time, more bars and restaurants have opened and more people with cars have moved into the neighborhood."

Some residents said they support the changes to the plan, but worry that the flex spots won't go to restaurant workers or customers.

Mayor John Cranley twice vetoed residential parking permit plans in OTR. Cranley says that it's unfair to block people from other parts of the city from parking on public streets they pay for. He also said it will make parking harder — especially for those working in OTR who live elsewhere.

Now that has been implemented, Cranley this week introduced his own tweak to the permit plan — one that would set aside spots for employees working in OTR who make less than $50,000 a year. Not everyone is thrilled by that change, however.

Over-the-Rhine Community Council member Margy Waller posted on social media pointing out that the city doesn't know how many workers will be eligible for the permit, that the changes seem to apply to workers in the whole neighborhood, not just the southern half, and that workers would likely be able to use the permits even when they weren't working.

Cranley's ordinance was referred to council's Budget and Finance Committee. He said he's flexible on the income level.

"I'm not sure that we won't need to do additional work," he said. "Who knows who we're not even hearing from. Over-the-Rhine is a mixed-use neighborhood… we have to be real careful not to kill the golden goose that has led to the revitalization in Over-the-Rhine."