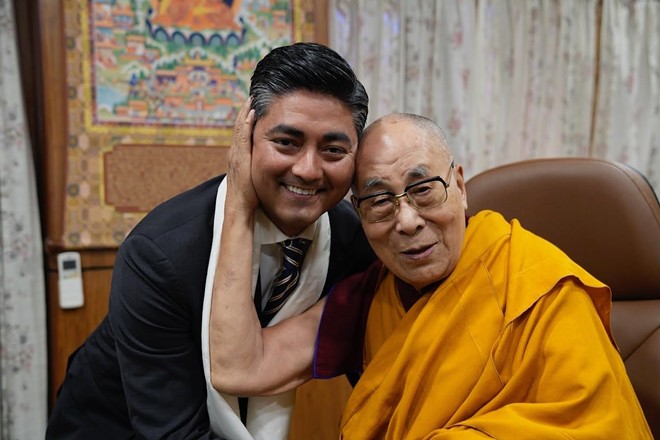 Photo: Provided by Aftab Pureval
Pureval is the nation's highest ranking Tibetan-American public official. He met the 14th Dalai Lama during a trip to India in December 2022.

Cincinnati Mayor Aftab Pureval returned from his trip to India on Dec. 7 where he met with His Holiness the 14th Dalai Lama. One big topic of discussion? The climate crisis.

Pureval, the nation's highest ranking Tibetan-American public official, told CityBeat he “hung out” with Tibet’s spiritual leader for about an hour with other American mayors.

“We had an opportunity for a frank conversation about his thoughts on the world, his concerns, his hopes. And throughout, he prioritized instructing mayors to continue to be intentional about compassion and warm-heartedness and leading with love, and those are lessons I will continue to try and live up to,” Purval said.

While the mayor said His Holiness’ broader themes of peace and compassion can be applied to all of his initiatives to lead Cincinnati, Pureval's biggest policy takeaway focused on the environment.

“He spent some time on the existential threat of climate change,” Pureval said. “He was very concerned about its impact, not just on humanity, but all sentient beings. He really rallied us to continue to be concerned about that and make decisions impactful of that. Cincinnati is home to the largest city-led solar array in the country, and continuing to think of how we can really address clean water and clear air, those are really top of mind after our visit.”

The Dalai Lama is 87 years old, but Pureval still extended an invitation to His Holiness to visit the Queen City. He says he hopes the Tibetan spiritual leader can make it, even though travel might be challenging due to his age.

“I made the pitch, and so they are considering it!” Pureval said. “If he came here it would be very simple, and that would be giving him the opportunity to spread his message of love and compassion to the city.”