The renovation will bring several new plazas, a running track and a bocce ball court to the park. 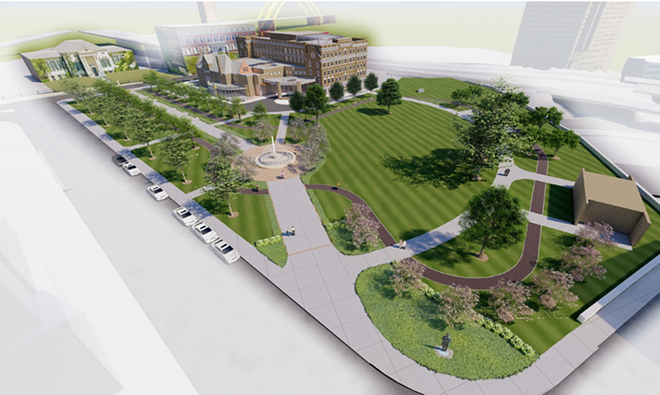 Photo: Provided by the Cincinnati Board of Park Commissioners
Rendering of Lytle Park's renovation
The renovation project for Lytle Park is ready to break ground.

The Cincinnati Board of Park Commissioners says the project will revitalize the underused park at the southeast corner of downtown Cincinnati. The groundbreaking will happen next week.

The board said Lytle Park’s renovation became imperative following the Ohio Department of Transportation’s Lytle Tunnel ventilation project, which was completed in 2017.

“Restoring the highway tunnel has left Lytle Park a little bland. Well, that is about to change in a big way. We are excited to bring Lytle Park back to life and create an amazing public space where generations of Cincinnatians will get to have fun,” said Cincinnati Parks director Jason Barron in a press release.

When construction is done, the park will have several new plazas and brick walkways, along with a decorative fountain, running track and a bocce ball court. The renovation will also bring new lighting, landscaping and benches.

The total cost for the project is expected to be $4.7 million, with Western & Southern Financial Fund contributing $3.2 million, ODOT contributing $1.1 million  and the Park Board using $400,000 of its own funding. The board originally put a bid in to the city for the project in 2018-2019 but had to rebid again at the beginning of the year.

“As frustrating as the project delays have been, we want to express our deep appreciation for the lasting commitment and funding Western & Southern has given to ensure this public park will be completely renovated for the enjoyment of generations of park neighbors, residents and visitors,” said Cincinnati Board of Park Commissioners president Jim Goetz in the release. “We remain grateful to have their continued support.”

The renovation is expected to be finished in fall 2023.