Eviction cases were originally slated to begin again July 1, but county judges pushed the date up after a lawsuit. Pureval has set up an Eviction Help Center to connect tenants facing eviction with assistance. 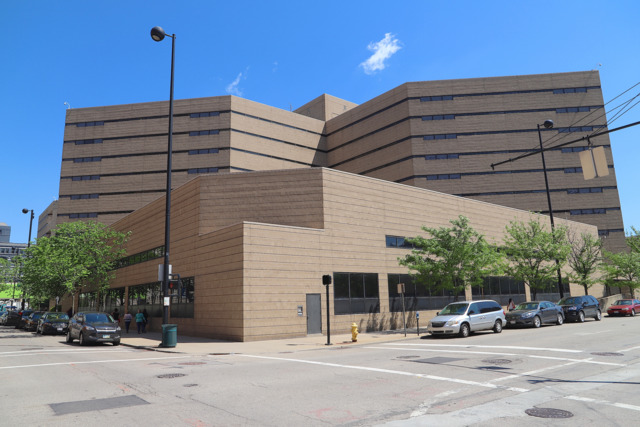 Nick Swartsell
The Hamilton County Justice Center, where eviction proceedings are currently taking place due to the pandemic.

County judges had decided May 29 to wait until July 1 to begin eviction proceedings again. But they reversed course last week after Salvador Properties, which owns apartment buildings in Cincinnati, sued in the Ohio Supreme Court seeking to resume eviction proceedings. The company argued that the court's closure — part of a larger suspension of many court proceedings over concerns about spreading COVID-19 — left landlords with no options when dealing with tenants who had damaged property and essentially allowed them to become "squatters."

Hamilton County Clerk of Courts Aftab Pureval says that there are roughly 1,000 eviction cases currently pending due to the court closures.

Many affordable housing groups and tenant rights advocates have decried the move, saying it will force more tenants into homelessness during a dangerous pandemic.

Clerk of Courts Pureval today announced his office was setting up an Eviction Help Center in Room 115 of the Hamilton County Justice Center across from the courtroom that will be used for evictions. Judges have opted to move eviction proceedings from the courthouse during the pandemic to better facilitate social distancing.

"In the midst of a global pandemic, where people are encouraged to stay home, and with unemployment in Ohio at 17 percent, higher than the national average, now is not the time to be evicting people from their homes," Pureval said.

Cincinnati's eviction rate is roughly twice the national average. More than six in 10 of Cincinnati residents are renters, and roughly half of them pay more than the 30 percent of their income for housing recommended by the federal government.

The Eviction Help Center, staffed by personnel from the Clerk of Courts' courthouse help center along with workers from St. Vincent de Paul and the Community Action Agency, will work to connect tenants and landlords with rental assistance available and advise about other options to keep evictions from happening. St. Vincent de Paul administers those rental assistance funds from the City of Cincinnati and other sources.

Previously, the Clerk of Courts office has run a help center in the courthouse for the past two years to provide county residents with a number of law-related services. The help station in the justice center will be focused on evictions.

The center opened today at 9:30 a.m. as eviction proceedings started. Pureval says there was a line to utilize the services.

Pureval says his office is also setting up an online directory that will help tenants and landlords find when and where their eviction cases will be heard and is also mailing postcards with information about eviction prevention resources such as rental aid.

However, Pureval is worried that the situation could get much worse without intervention.

“What we’re all really worried about is an eviction crisis in July and August," he says. "When (federal pandemic response) CARES Act unemployment benefits expire in July, we expect eviction filings to skyrocket. That will create problems not just for landlords and tenants, but for our shelters, our social service agencies and public health. When people who are being encouraged to stay at home have no home, that increases the chances of exposure.”