The $40 million venue by concert promoters PromoWest/AEG Presents is the first phase of the more than $1 billion project, developers say.

Call it The Banks South. Or don't, if you don't want to hurt Cincinnati's feelings.

A 35-acre parcel of land in Newport near where the Ohio and Licking Rivers meet will see a big new development effort, including an indoor-outdoor concert venue, developers announced today.

The $40 million venue by Columbus-based PromoWest Productions (which is now owned by the huge AEG Presents) will anchor the site, which has been owned by Covington-based Corporex since 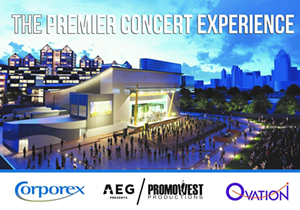 facebook.com/promowestlive
Venue rendering from PromoWest Live's Facebook page
2006. Prior to that, the site was home to 202 units of subsidized housing, the residents of which officials say were relocated to other parts of the city. The venue represents the first phase in the project, which Corporex says will eventually see more than $1 billion in development including 1 million feet of retail space and more than 900 apartments.

The venue, which will sit atop a 550-space parking garage, will have capacity for 7,000 fans outside and another 2,700 inside. PromoWest says that it will host 180 events a year and could draw as many as 400,000 people annually. The company is aiming for big name-acts like Snoop Dogg and the Killers and hopes to have the venue open by the end of next year.

Corporex will own the venue and will lease it to PromoWest.

“We saw this as an opportunity to bring one of the world’s largest live music companies to the region and as an anchor to our Ovation development," Corporex said in a statement. "The AEG/PromoWest Venue is a very unique indoor/outdoor facility that creates an intimate musical experience. AEG intends to capitalize on its existing facilities in Columbus and Pittsburg and bring many of those same acts to Cincinnati.”

PromoWest had thrown its hat in the ring for the opportunity to develop a similar venue north of the Ohio at Cincinnati riverfront development The Banks. Mayor John Cranley supported the company's bid, but officials with The Banks Steering Committee tapped the Cincinnati Symphony Orchestra's concert promotions arm MEMI to construct a venue there instead.

“The Newport location provides AEG/PromoWest the perfect opportunity to expand our Midwest presence to the Cincinnati marketplace,” Scott Stienecker, CEO of PromoWest, said in a press release. “We intend to bring many of the same groups that play at our EXPRESS LIVE! in Columbus, Ohio, and STAGE AE in Pittsburgh, Penn. to Greater Cincinnati.”

The Cincinnati Symphony Orchestra tweeted after the Newport announcement that it remained "fully committed to moving forward with the performance venue at The Banks and are ready to begin construction immediately."

The lastest rendering of The Banks performance venue from @GBBNArchitects. The CSO and MEMI remain fully committed to moving forward with the performance venue at The Banks and are ready to begin construction immediately. @CincySymphony pic.twitter.com/ccitHnE0V4


Sign up for CityBeat's weekly newsletters to get the latest on Cincinnati culture, dining news and things to do delivered right to your inbox.