After two recent incidents involving Cincinnati Police officers using a racial slur, council members Tamaya Dennard and Wendell Young are calling for a change in city policy that would require officers using such language to be fired 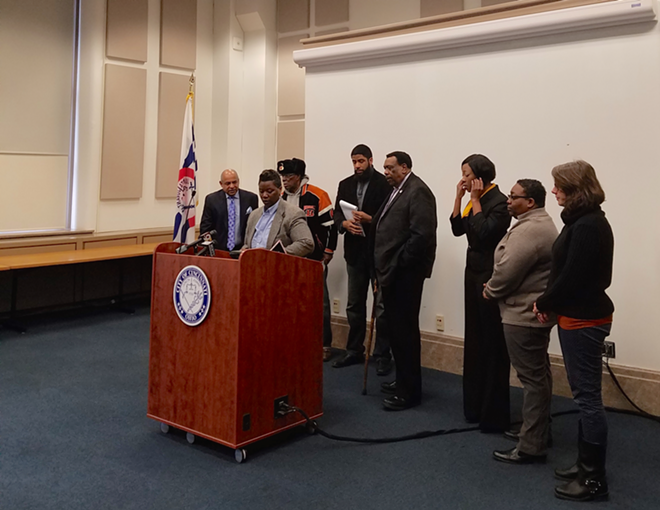 After uproar over revelations that two Cincinnati Police officers late last year used the same racial slur for African-Americans in separate incidents while on duty, two Cincinnati City Council members are calling for changes to the city's policy around use of the epithets.

Council members Tamaya Dennard and Wendell Young have introduced legislation that would require city employees and contractors to be fired if they're caught using the slurs while on duty.

Body camera footage released Jan. 1 by the Cincinnati Police Department shows officer Dennis Barnette struggling with a woman outside the Brownstone Café in Roselawn Dec. 23 and remarking, “N***** slapped me in the face.” Barnette is white, and the woman is black. Barnette says the woman pushed him. She was arrested and charged with assaulting a police officer.

Footage from an unrelated, Sept. 26 call responding to a domestic situation shows officer Donte Hill and another officer attempting to break up a verbal altercation. The confrontation between a man and a woman becomes physical, and Hill steps in, using his Taser on the man and arresting him. As he does, Hill remarks, “That goddamned alcohol got you n****** acting crazy.” Hill and those he was addressing are black.

"We know that police have a hard job every single day, and we're grateful for the service they provide," Dennard said today during a news conference about the legislation. "But to be clear, that service is to protect and serve our entire city. And if you can't do that in a way that is fair, you shouldn't be a police officer. You can't legislate someone's heart. And oftentimes, we don't know what's in someone's heart. But in the case of Officer Barnette, what was in his heart came out of his mouth. And not just him, but other officers who came before him. And while we can't legislate what's in someone's heart, we can work on policy."

At first, the proposed legislation would apply only to CPD employees. It was later widened to include other city employees and contractors.

The Cincinnati NAACP, the Black United Front and the Black Lawyers Association of Cincinnati have called for Barnette and other officers using the slur to be dismissed from the force.

"Here in the City of Cincinnati, we cannot tolerate and keep on the payroll people who don't understand the need for fundamental respect for the people they serve," Young said. "It doesn't matter if that officer is black, white, male, female, gay, straight, polka dot, striped... it makes no difference. You can't train out of a person's heart what is already there. What you can do is demand behavior that demonstrates what taxpayers pay for: fair and impartial treatment."

The disciplinary fate of the two officers caught using the slurs is still up in the air. Cincinnati Police Chief Eliot Isaac has the final say on their punishment. But the city's policies — and past legal action — may keep them from being fired.

Both officers involved in the recent controversies around racial slurs were placed on desk duty following the incidents. CPD Chief Eliot Isaac later said that degree of punishment wasn’t enough and promised a further investigation into both incidents after they became public.

In response to the controversy, Mayor John Cranley Jan. 4 introduced legislation that would require training in implicit and explicit bias for new recruits to the city's police force as well as other new city workers.

"We all know that racism is the original sin in American history," Cranley said during a news conference about the legislation. "The use of the n-word is totally unacceptable, and we won't stand for it."

Cranley also highlighted changes to city policy made by City Manager Patrick Duhaney earlier this year that clarifies penalties for city employees who use such language while in a work environment.

Duhaney says under old policies, discipline for discriminatory behavior like using racial slurs was unclear. Under the revisions put in place last August, an employee would be subject to 40 hours suspension without pay and mandatory retraining upon a first offense, and could be subject to dismissal after a second offense.

CPD's Isaac says both officers who used racial slurs in recent incidents would be subject to those disciplinary actions should an investigation find they broke city policy.

"We have to be mindful of administrative law," he said. "(The officers) must be given due process."

Cranley and others in city administration say that past attempts to fire officers for using racially-charged language led to court battles that the city lost. They're trying to strike a balance between strict punishment and a response that will hold up in court, they say.

But Dennard, Young and activists with BLAC, the NAACP and the Black United Front decried the possibility that the officers could get off with a suspension.

"What we shouldn't do is provide a get-out-of-jail-free card for saying racial slurs in our city," Dennard said. "Essentially, that's what they're proposing. They say they fear lawsuits and that they're looking after the financial welfare of our city. But I'm willing to make the city bankrupt so that people can hold their heads high and feel like they're being protected and served by the taxes that they pay."

The incidents came during a rough year for CPD, during which the department saw controversy around its use of Tasers on minors, questions about the culture inside the department and an independent audit suggesting that the department has walked back from key parts of the city’s Collaborative Agreement even as the city undertakes a "refresh" of that agreement. That court-ordered set of reforms around race and policing sprang up in the aftermath of the 2001 civil unrest sparked by the police shooting of black, unarmed 19-year-old Timothy Thomas.

A group led by Saul Green, the attorney who monitored the original court-ordered Collaborative, looked at the progress the city has made since the initial reforms. The group's assessment: The city is moving backward when it comes to some race-related police reforms.

The panel found that evidence provided by the city "strongly signals that the City of Cincinnati has abandoned the principles of the Collaborative Agreement,” Green’s team wrote in their final of three reports. “…Taken literally, it states that the City of Cincinnati has unilaterally withdrawn from the Collaborative Agreement.”

Activists drew a direct line between the agreement and the recent use of racial slurs.

"One of the biggest components of the refresh of the Collaborative Agreement is bias-free policing," Black United Front's Iris Roley said today. Roley was instrumental in securing the Collaborative Agreement in the aftermath of 2001. "How can we believe that we will get bias-free policing if we enact policies that will allow any police officer or city employee to call us by a name that we know is an ethnic slur and hate speech?"