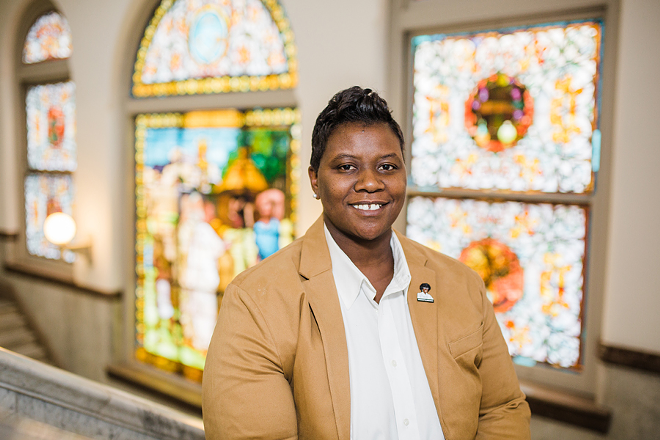 City Council’s three newcomers will have to wrestle with a number of tough questions after they’re sworn in on Jan. 2. CityBeat reached out to each — Republican Jeff Pastor and Democrats Greg Landsman and Tamaya Dennard — to ask five in particular. First up is Dennard; responses by Landsman and Pastor will be published in the next two issues of CityBeat.

Dennard’s fellow council members recently voted her president pro tempore of council, a largely symbolic rank just under vice mayor. She ran her successful council bid with endorsements from the Democratic Party and the Charter Committee. Before running for council, she worked for social innovation nonprofit Design Impact, as a staff member for Councilman P.G. Sittenfeld and for Duke Energy.

Dennard is a graduate of the University of Cincinnati who says growing up in a low-income family informed her stances on economic and social issues. She lives in Camp Washington.

CityBeat: City support for infrastructure around a proposed FC Cincinnati stadium, to the tune of $37 million, has been a hot topic of late. It’s likely, if FC Cincinnati wins an MLS expansion franchise, that you’ll be faced with voting on some elements of this spending. Do you support the deal council passed Nov. 29? What could have made it better? The West End has been floated as another potential site for the project. Do you have thoughts on that location versus Oakley?

Tamaya Dennard: I have tremendous respect for the leadership and the owners of the FC Cincinnati franchise. They’ve brought an unbelievable amount of excitement to our city. I’ve enjoyed my time at FC Cincinnati games. However, with limited resources, we must make choices that prioritize the concerns of everyday Cincinnatians. It was extremely frustrating to watch this lame duck City Council vote to spend so much money without a lot of community input. Quite frankly, there are too many unanswered questions. A proposed project of this scale shouldn’t be rushed through.

This proposal should’ve been vetted by the public and discussed during the election. I’m also a huge proponent of Community Benefits Agreements, which are community-specific amenities and concessions given to a community in exchange for their support. CBA’s are a legally binding document that need to be enforced. The city of Cincinnati needs to demand a CBA (on this and other developments) and it shouldn’t be considered or put forth after City Council approves the spending. It should be a condition of approval.

Locating this stadium in the West End could also mean restructuring the neighborhood and the destruction of many buildings that affect people’s daily lives and many people who are experiencing poverty. We have previously destroyed the fabric of the West End with the construction of I-75 and we can’t do that again.
I also don’t agree with using the funds from the sale of the Blue Ash Airport, which could support a number of needs in our city, which frankly have a higher priority than a stadium. Historically speaking, large local subsidies to build stadiums for professional sports teams usually cost taxpayers more than the local economic benefits that are generated from them.

CB: One of the city’s biggest moves last year was the creation of an independent board that will oversee the Metropolitan Sewer District, which has faced allegations of monetary mismanagement and conflict between the city and the county. Assuming state lawmakers approve the MSD deal, do you see the deal the city struck as a good one? Why or why not?

TD: Yes, I do think it was a good one. There are some changes around billing that I would like to see for ratepayers. However, the deal was one where citizens wouldn’t see too much change to their services, including cost increases. Also, it is important to me that MSD remains a public utility and the employees maintain their AFSCME union members and retained their city pension status. Everything shouldn’t be politicized. It’s about doing what’s best for ratepayers.

CB: Part of the impetus behind that deal was a less-than-cordial relationship between the city and the county. As an incoming council member, do you see that improving during your tenure? Any plans to make that happen?

TD: Yes, I do see this improving during my tenure. Historically, the city and county have been less than cordial. I think you need people who are concerned with what’s best for our constituents and not being disagreeable for the sake of being disagreeable. That’s one of the main reasons I’m excited about County Commissioner Denise Driehaus. She is a big- picture thinker and she is always looking to do what’s right for everyone. She’s willing to work with anyone, regardless of his or her political affiliation. Having her as a commissioner is a big win for our region. When we aren’t moving forward cooperatively, ultimately it’s the people who lose. It’s not about turfs or egos. It’s about getting things done.

CB: Cincinnati’s Metro bus system is at a crossroads. Its performance is lagging, and without further funding or vastly increased ridership, it faces big deficits, fare increases and service reductions. What ideas do you have to help solve this problem? What can council do to keep Metro viable?

TD: We’re operating our bus system based on where people lived and worked 40 years ago. I’m a proponent for a sales tax increase to help our bus system meet the capital and operating financial demands it’s facing but to also be the cornerstone to the transit system our city needs in order to grow. That being said, some of the challenges our bus system faces don’t require new funds. Right now, we have buses that aren’t showing up and we have inefficient bus routes that include more bus stops than we need.

Having a sales tax increase of 0.75 percent would help us to get the transportation system that we need to connect people to jobs and to make our city a less car-centric one, thus more environmentally friendly.

I would also seek some synergy and potential partnership opportunities between the Cincinnati Hamilton County Community Action Agency’s commercial drivers license program to assist with the shortage of SORTA bus drivers.

CB: The city’s poverty problems have been big issues for a long time now, and yet we’ve seen very little change recently. What can council do to move the needle? What is your view on the city’s current human services spending? Should it be increased? Should the city change the way it allocates those dollars away from the existing United Way process? Do you think the mayor’s initiatives — Hand Up and Poverty Collaborative — are promising?

TD: Yes, the city needs to increase its funding for human services. But that’s not enough. City Council needs to seek out the policies that create and perpetuate systemic and institutional racism and start over in a more equitable way.

We also need to look at the allocation of resources in our neighborhoods experiencing high rates of poverty. For example, only neighborhoods that have Community Development Corporations can actually receive dollars from the city for the purpose of economic development. That’s a problem because that means neighborhoods of privilege will continue to see development investment from city government and the communities who need the most investment won’t.

\It’s up to the city to structure creative economic deals and packages for communities experiencing poverty in the same manner they structure deals for the communities of affluence. Our job as a city council is to make sure we understand what the implications are for every policy, for every community, every time; not just the financial implications.

We need to take into account the health, education, environment and social implications of policies as well. We cannot keep trying to solve our challenges with poverty with Band-Aid solutions. In doing so, we will continue to have ineffective programs that take up resources but don’t move the needle. We need to start addressing the root causes of our challenges.

That will only happen when we bring the people who are most impacted by these challenges to the table in an authentic way that isn’t tokenism or asking them for feedback after decisions have been made for them.

I’m excited about Dr. Karen Bankston being at the helm of the Poverty Collaborative. I believe with her leadership, we will finally get past conversations and start moving into action and real investment into people. ©