In a change from current policy, HCSO will not comply with ICE detainer requests when there's not a signed judicial warrant. 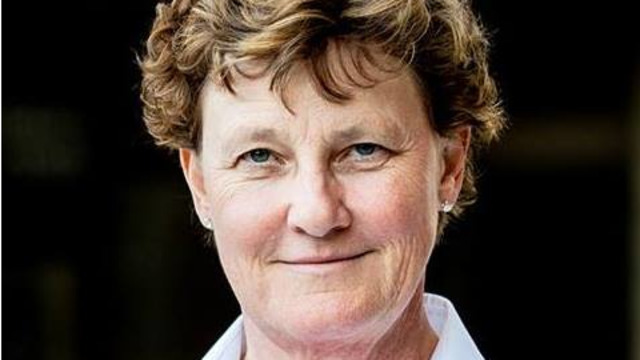 The Hamilton County Sheriff's Office soon will stop collaborating with Immigrations and Customs Enforcement (ICE) on detaining people living illegally within the county.

Sheriff Charmaine McGuffey said Tuesday that HCSO expects to finalize a new policy soon that reduces the department's collaboration with ICE when there's not a signed judicial warrant. During a Zoom meeting with The Amos Project, a network of faith communities advocating for racial and economic justice within Ohio, McGuffey said that HCSO has done "a rewrite of our immigration policy" and that immigration attorneys have provided input.

"We do have a policy, and the policy is going to dictate that we do not call ICE on just the basis of a detainer. We will not do that. If ICE wants someone detained, they're going to have to have a warrant actually signed by a judge that is valid and lawful," McGuffey told Amos Project members via Zoom on July 27. "We do not recognize detainers, and we will not be calling ICE and sharing information with ICE when our policy is signed and put into place, which should be, in fact, this week."

Lawfare, a legal policy blog published in collaboration with public policy nonprofit The Brookings Institution, says that ICE "uses detainers to inform other law enforcement agencies that it 'seeks custody of an alien presently' in the other agency’s custody." ICE prioritizes individuals without "lawful immigration status" once they are arrested by local law enforcement, regardless if criminal charges are applied, Lawfare adds.

"We will not be setting up phone interviews for ICE to call in and talk to anyone here who is not, again, legally on a signed judicial warrant," McGuffey said. "Our policies will be certainly tracked and our information about housing people who do not have documentation or whatever their criminal background is will be made readily available and transparent."

"We are ready to roll it out. Once it's rolled out, we will be able to start enacting those changes," she added.

The Hamilton County Sheriff's Office clarified in an email to CityBeat on Thursday that though McGuffey had told Amos Project to expect the new policy this week, her team still is finalizing things.

"Sheriff McGuffey is actively reviewing the language of the new policy and has prioritized getting it finalized," Kyla Woods, public information officer for HCSO, told CityBeat. "We have to give the internal process due diligence, so we don’t have an exact timetable on when it may be final. But it is certainly of extreme importance and high priority to the Sheriff."

"Sheriff McGuffey believes that Hamilton County is safer when anyone, no matter their documentation, feels they can work with law enforcement. To that end, she has met with several leaders in our Immigration Reform and Advocacy community and listened to their concerns about how to make our neighbors who have migrated here feel more welcome, and create a path to success," Woods told CityBeat. "One key element is identification, and making sure that we have consistency in the regulations for what is or is not acceptable identification for immigrants. That is something Sheriff McGuffey will continue to work on with this group of leaders."

During the Zoom meeting, McGuffey also responded to questions about bail reform, mental health for officers in addition to those who are incarcerated, and de-escalation efforts.

"Addressing the inequities created by our cash bail system is important to me and the Jewish community. Ohio incarcerates thousands of people before their arraignments or official court dates just because they cannot pay bail and buy their freedom," Leah Marcus, chairperson of the social justice and advocacy committee for Adath Israel Synagogue, said. "Those who can afford to pay for their freedom do so and the rest stay behind."

McGuffey said that she is a proponent of cash bail reform, noting that she's reviewing Ohio Senate Bill 182 and Ohio House Bill 315.

"I want to be very clear about what they say, what the implications are, how they will actually work in real time in our justice center here. Certainly, I know the value of people not coming to jail if we don't have to jail someone," McGuffey said. "The other piece to that is this: we do have options in our community. We have electronic monitoring. We have ways to interact with someone who has been released on bail."

McGuffey mentioned that one of her priorities when she became sheriff was to build a community liaison unit that would "outreach and connect." She said that upon setting up HCSO's call line this spring, her team has received thousands of calls about everything from deputy interactions to court information.

"We've also created a database to go with that so we can start cataloging where are most of the questions coming from and what do they pertain to," McGuffey said. "In the two months that we've been able to launch this — and it took some time to get it up and running, and we're going to expand it — but in the two months it took, May and June, we have fielded 7,000 calls through our call line. That is amazing. And what that tells us is there are lots of questions and things that people need to know about navigating the criminal justice system."

McGuffey took office in January after running on a platform of reform. Throughout her campaign for the position, McGuffey had pledged to reduce law enforcement's use of force, create better connections within communities and help marginalized residents — such as those who are LGBTQ+, non-white or of undocumented status — feel more comfortable approaching the department for help.