The vandal cut through the wolf's paws to haul the statue away overnight. 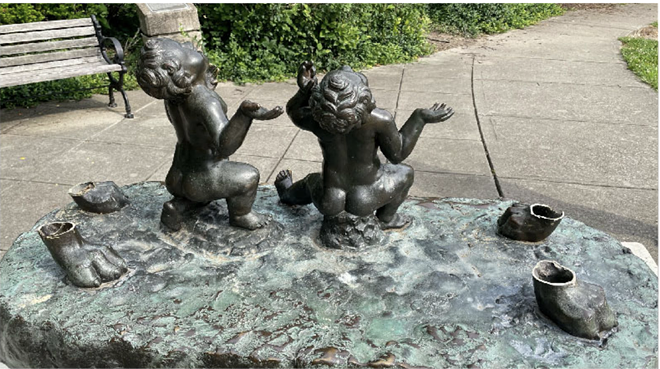 Photo: cincinnati-oh.gov
What is left of the Capitoline Wolf statue in Eden Park.

The ​​Capitoline Wolf statue, which has sat in Eden Park since 1931, has been stolen, and the city is now offering a $50,000 reward for its return.

The statue — a bronze work depicting a she-wolf nursing two young boys — was a gift from Italian dictator Benito Mussolini.

Intended to honor Lucius Quinctius Cincinnatus, Roman statesman, farmer and namesake of our dear city, the two thirsty boys represent Romulus and Remus, twins whose story relates to the founding of Rome. In fact, various images of the boys suckling a she-wolf have served as symbols of the Roman people since ancient times. 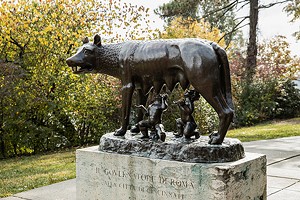 Photo: Hailey Bollinger
The Capitoline Wolf statue in Eden Park before it was stolen.

So how did the statue get here? Mussolini sent it over for a Sons of Italy convention in 1929… sort of. He gave Cincinnati an exact replica of one found in Rome’s Musei Capitolini, but it was switched out for a larger one in 1931, and that is the one that has remained in place ever since. It is inscribed with Il Governatore di Roma alla Citta di Cincinnati 1931 Anno X — "from the governor of Rome to the city of Cincinnati in 1931 (year 10 of Mussolini’s reign)" — and until now, it sat at Twin Lakes.

While the origin of the statue in the Queen City already is a bit questionable, its story has now gotten even more interesting.

According to an incident report from the Cincinnati Police Department, the statue was taken around 8 p.m. on June 16.

How do you steal a huge bronze statue, you may ask? Well, this vandal cut it from the paws and took it, leaving just Romulus and Remus, per a release from Cincinnati Parks.

While we know the how, everyone is currently trying to figure out why. The parks department says it is working with police to determine the value of the historic piece of art and, of course, to find it.

“As you know, we often deal with vandalism, litter and dumping issues in our parks, however given the historical nature of this piece this is beyond disappointing. Public works such as this displayed throughout our parks have historical significance and are intended to be exhibited for the enjoyment and study of the general public,” the parks department writes.

If you have any information on the whereabouts of the statue, contact Cincinnati police. Leave a tip online or call Crime Stoppers at 513-352-3040.