Last Days for the Dennison? 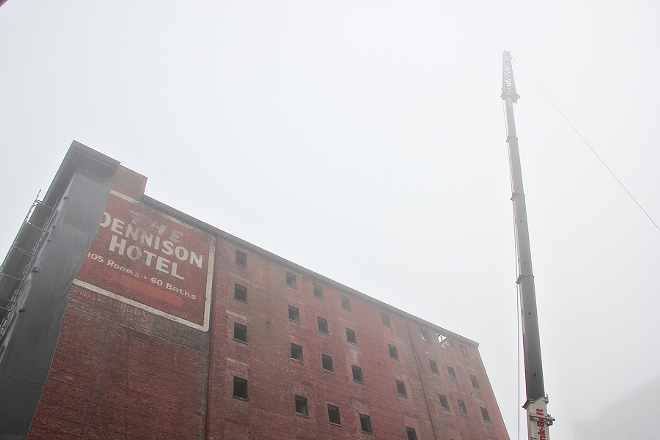 Photo: Nick Swartsell
Contractors have begun dismantling the Dennison Hotel building at 716 Main St. The building was designed by famed architect Samuel Hannaford’s firm and constructed in 1892.
Patches of sky were visible through the top-floor windows at the back of the 125-year-old Dennison Hotel the morning of Feb. 20, and a thick, drifting fog enveloped the building in downtown Cincinnati’s Main Street Historic District.

As contractors began to demolish it by removing portions of its roof, a crane stood nearby at the ready.

“This Dennison situation is not right,” attorney Sean Suder, who represents preservationists seeking to save the Dennison, wrote on social media Feb. 20.

Columbia says the building is standing in the way of progress and that it has reached the end of its functional lifespan. The company purchased the Dennison in 2013 as part of a plan for a large office site and to block a proposed permanent supportive housing development.

The Dennison was built in 1892 and cycled through several uses before becoming affordable housing in the last decades of the 20th century. It was the last of 20 single-room occupancy buildings downtown when its final tenant was evicted in 2011.

Advocates say the building is an important part of the historic district it sits in. As they rush against the clock and the odds to find a way to block demolition, they’re also looking toward future battles.

On Feb. 18, a small group of Dennison supporters gathered a few blocks from the building to talk strategy. The paths through local courts are dwindling, but there’s also a bigger fight to consider.

“We need to build an infrastructure for historic preservation,” said Danny Klingler, a preservation advocate, at the meeting. “We have 1,000 members on the Save the Dennison Facebook group. Facebook is great, but we need to convert that into real action.”

Among those potential actions: backing pro-preservation candidates in the coming mayoral and City Council elections, identifying at-risk historic structures and working earlier to save them and using boycotts, pickets and other tactics to pressure businesses and politicians who haven’t been friendly to historic preservation.

Meanwhile, chances for a last-minute reprieve for the Dennison get narrower and narrower.

Hamilton County Common Pleas Court Judge Lisa Allen on Feb. 7 turned down a request for a two-week restraining order pausing demolition on the building after nearby property owner Matthew Wood sued to block Columbia from tearing it down.

“Once the building comes down, the damage is done and you can’t undo that,” Wood’s attorney, Tabitha Hochscheid, told the court.

After about an hour of testimony from both Hochscheid and Columbia’s attorneys, Fran Barrett and Tim Burke, Allen quickly shot down the request for the delay without much comment.

“He can’t show any harm to his property,” Barrett told the court, describing Wood’s suit as “not the 11th hour, but the 12th hour.”

That leaves few legal options for preservationists. They can challenge a decision from the city’s Zoning Board of Appeals, which overturned an earlier refusal to issue a demolition permit from the city’s Historic Conservation Board. They can also take issue with Columbia’s use of city-owned alleys near the Dennison for parking. Or they can push the city to delay the demolition until it decides on a proposal from Cincinnati City Councilman Chris Seelbach that the Dennison be declared a historic landmark.

The Historic Conservation Board initially ruled that Columbia didn’t show that the Dennison presented an economic hardship — a requirement when demolishing a building in a historic district — and that the company could still sell or rehabilitate it. Potential buyers, including Pittsburgh-based developers Linden Partners, expressed interest in purchasing the Dennison, but were rebuffed by Columbia.

On Dec. 9, 2016, however, the Zoning Board of Appeals overturned the HCB’s decision, clearing the way for the city to issue the permit.

Preservationists would likely have to appeal the ZBA’s decision before Hamilton County Magistrate Michael Bachman. Last week, Bachman overturned a ZBA decision that had blocked the demolition of another historic building on Main Street — the Davis Furniture Building, a few blocks north of the Dennison in Over-the-Rhine. That case, an appeal from the building’s owners against the city’s decision to deny a demolition permit, hinged on similar legal questions to those involved in the potential appeal on the Dennison’s demolition.

The city has used that same landmark status to prevent the demolition of buildings in the recent past. In 2015, the city declared the former King Records facility in Evanston a historic landmark to block its owners, Dynamic Industries, from demolishing the structure. The difference, the city says, is in the timing.

“In the case of the Dennison Hotel, the property owner exhausted the city’s procedures for obtaining a certificate of appropriateness prior to the filing of the landmark designation application,” a Jan. 6 memo from the Cincinnati city solicitor says.

But preservationists, and attorney Suder, take issue with the differing approaches the city has taken to the two buildings.

Critics see political elements to the Dennison saga. The building’s plight has energized urban progressives and critics of Mayor John Cranley like Councilman Seelbach, Council candidate Derek Bauman and others. Dennison owners the Josephs are big Cranley donors — having given some $18,700 to Cranley’s 2013 election campaign and another $15,000 to the Cranley-backed Issue 22 park levy in 2015.

The Dennison was among the last of downtown’s affordable housing options. Just a few years ago, there were some 230 affordable single-room-occupancy units at the Metropole, 114 at the Dennison and another 84 at the Anna Louise Inn. Now, the Metropole is the luxury 21c Museum Hotel and the Anna Louise Inn is empty and undergoing a similar redevelopment.

Columbia bought the Dennison at least in part to block the plan to turn it into permanent supportive housing, documents filed with the HCB reveal.

“Since it was believed this type of use would have a damaging effect on their investment in particular and on the neighborhood in general, the family concluded it was necessary to acquire this property,” Columbia wrote in the April 1, 2016 filing. “The acquisition would then be a part of the assemblage of the parcels in this block to facilitate a major redevelopment.”

In the Dennison’s place, Columbia says it would like to construct a headquarters for a Fortune 500 company. The company has been acquiring property around the Dennison since the 1960s, when it owned a car dealership downtown.

A Jan. 14, 1987 article in The Cincinnati Enquirer shows buildings near the Dennison being demolished and quotes a Columbia spokesperson saying that a big development project on the parcels was “several years” down the road. Today, the lots are used for pay parking. ©