The march and motorcade leaves from the Freedom Center at The Banks at 10:30 a.m. Jan. 17.

The march, presented by the MLK Coalition, starts at 10:30 a.m. Jan. 17. It leaves from the National Underground Railroad Freedom Center and makes its way to Washington Park.

Two Metro buses will take part in the march and motorcade, including a Rosa Parks Bus. 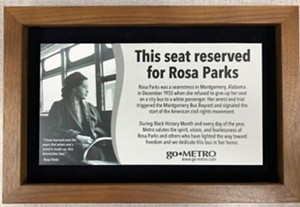 Photo: Provided by Metro
A plaque commemorating Rosa Parks
A commemorative plaque on the bus in honor of Parks reads:


"This seat reserved for Rosa Parks. Rosa Parks was a seamstress in Montgomery, Alabama in December 1955 when she refused to give up her seat on a city bus to a white passenger. Her arrest and trial triggered the Montgomery Buys Boycott and signaled the start of the American Civil Rights Movement.

During Black History Month and every day of the year, Metro salutes the spirit, vision and fearlessness of Rosa Parks and others who have lighted the way toward freedom and we dedicate this bus in her honor."

“At the heart of Metro’s mission is to lift up the community by providing equitable access to jobs, education, health care and everything else they need to prosper, regardless of race, background or socioeconomic status,” said Metro CEO and General Manager Darryl Haley in a release. “We’ll march Monday in the spirit of that mission, which both Dr. King and Ms. Parks shared and embodied.”

Metro says their buses will provide transportation to those who cannot march the full time from the Freedom Center to Washington Park. Masks will be required to ride the bus.

After the march concludes, a program honoring King and his legacy will take place at noon at Music Hall, with keynote speaker Iris Roley. The event is not open to the public but will stream at mlkcoalition.org.

Metro says buses will be running their regular schedule on Jan. 17 "in order to continue providing bus service to members of the community who need access to employment, health care and other appointments."