The bill comes as the U.S. Supreme Court prepares to hear arguments in a Mississippi abortion case that could challenge Roe v. Wade. 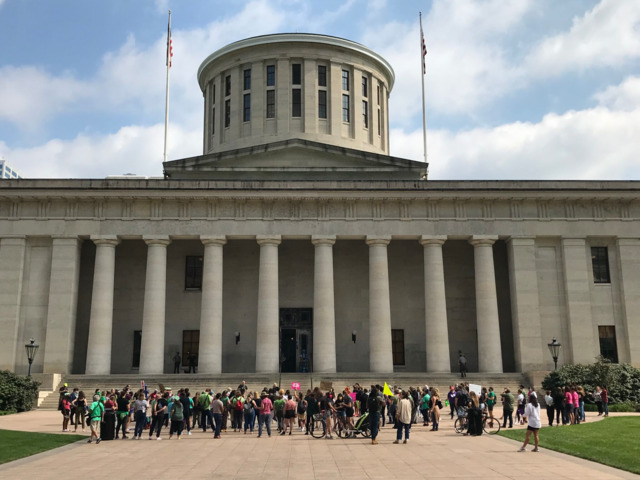 Photo: Susan Tebben, Ohio Capital Journal
Protesters of a bill to promote a total abortion ban with the overturning of Roe v. Wade demonstrate outside the Ohio Statehouse in September 2021.

A physician and co-sponsor of an abortion bill said the legislation could bring about safer abortion procedures for those choosing to have them.

The bill was introduced recently in the Ohio House after passing through the state Senate the same day a Senate committee approved the measure.

But co-sponsor state Sen. Steve Huffman, R-Tipp City, told a House committee the bill would also inform those wanting to get an abortion of doctors who have instances of “failed abortions,” so they can choose to go to another physician.

“If an abortionist has 10 babies born alive in a year, and there’s a woman who wants to go have an abortion and she says look, this abortionist is not performing the abortion the way they should, I should go to somebody else that’s safer and better,” Huffman said.

He said with the reporting system written into the new legislation, “we will know who and when this happens to and it will provide for safer abortions in the future for anyone who desires them.”

Though one of the main arguments Huffman and fellow co-sponsor state Sen. Terry Johnson, R-McDermott, also a physician, gave for passing the legislation was to create a reporting system for “failed abortions,” Huffman acknowledged the Ohio Department of Health does collect data on abortions.

“The report is there, but they’re not reporting that the child is alive, what type of resuscitation was done, or the viability,” Huffman said.

These forms are required under Ohio’s administrative code, effective since 2012.

Administrative code also requires that the physician determine viability, something that is reported in the ODH annual reports.

According to the state data, “failed abortions” are statistically rare, and none of the small number of reported cases in 2020 have occurred in viable pregnancies.

Abortion is legal up to 22 weeks gestation in Ohio.

Johnson cited a report from the DC-based Christian policy organization Family Research Council touting the data collected in nine other states with similar legislation, and a CDC report that showed 143 deaths “after live births that involved an abortion” in the last 12 years.

Johnson also said the bill addresses technological improvements, which he said could lead to earlier fetal viability, but also comes at a time when passage of abortion bills is more likely.

“Politically, right now we’re in a position where we can pass such bills, but in another decade the pendulum may swing back the other way and we may not be able to pass such a bill,” Johnson said.

Just before passing the legislation on to the full Senate, the Government and Oversight Committee added an amendment that prohibits doctors who receive funding from state university medical schools from being a part of variance agreements with abortion facilities.

The bill comes as the U.S. Supreme Court considers the Texas abortion ban, which could have implications on Roe v. Wade, the 1970’s decision that legalized abortion across the country. If the nation’s highest court overturns Roe v. Wade, legislation in Ohio stands at the ready to ban abortion in the state.