The joke here being... the police are the KKK and the Black officer wasn't welcome? 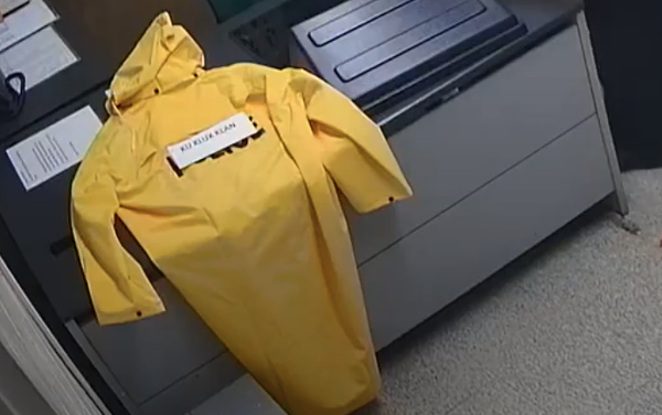 Sheffield Lake, Ohio Police Chief Anthony Campo retired from the department after 33 years this week after last week leaving a note, apparently reading "Ku Klux Klan," on the jacket of a Black officer, taping it over the "POLICE" wordmark.

The incident, caught on camera, was quickly brought to the attention of Mayor Dennis Bring, who acted quickly.

“The chief, he made a comment like 'What, am I going to get fired over this?'" Bring told WEWS Channel 5. “And I said, 'You have 10 minutes to get out of the building, I want your badge, I want your car keys, I want the keys to your office.' And he said, 'May I please type up a letter of my resignation, and I want to retire.'"

Campo, for his part, told Channel 5, "It was just a joke that got out of hand. I hired that officer on the force, he's excellent with children, and I helped to save his job after he was in danger of being let go by another department due to age restrictions."

The joke here being... the police are the KKK and the Black officer wasn't welcome?

Bring addressed the incident with the Black officer, who will remain with department.

“I'm disappointed and shocked," Bring told WEWS. "It’s like I’ve told everybody, you see this stuff on the news and you never expect to see it, and I’m just floored.”

James Hardiman of the Cleveland NAACP chapter told channel Fox 8: “It’s significant because it’s indicative of a much bigger problem. For a person in a position of responsibility to assume that he can get away with that, it’s tragic. Is this an isolated instance? Or, was this accepted protocol until he got caught?”