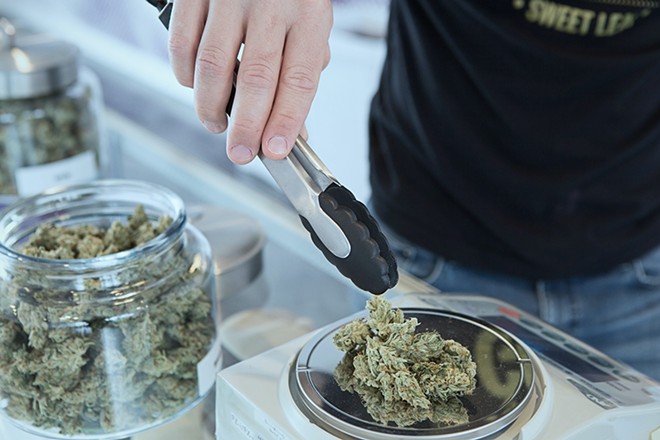 If lawmakers can’t or won’t pass a proposed bill, recreational marijuana in Ohio could be a matter for the people to decide.

Secretary of State Frank LaRose said Friday that the Coalition to Regulate Marijuana Like Alcohol submitted enough valid signatures to set in motion what’s known as an “initiated statute” process.

The coalition gathered 136,729 valid signatures spanning all Ohio’s 88 counties, according to LaRose. Those signatures plop the coalition’s proposed bill onto the Ohio General Assembly’s plate.

Lawmakers now get four months to pass the bill as is, amend it, or ignore it. If they go with the latter two options, the coalition can either accept the legislature’s response or gather another roughly 133,000 signatures to place the question of marijuana legalization on the general election ballot.

The proposal allows for the possession of up to 2.5 ounces of marijuana or 15 grams of marijuana extract. Adult Ohioans could purchase marijuana at retail locations or grow two plants at home (four if there are two adults living in the household). Products would be taxed at 10%.

Currently, Ohio law allows for the sale of medical marijuana for people with certain chronic conditions. That only became legal after a similar signature-gathering effort in 2016 for a constitutional amendment preceded Gov. John Kasich’s signing of Senate Bill 523.

At least two bills have been introduced to legalize recreational (or “adult use”) cannabis in Ohio: one from House Democrats and another, slightly more modest effort from House Republicans. Neither have received even an introductory hearing.

However, an initiated statute process can scramble the calculations for policy makers. Putting marijuana on the ballot can deliver a new class of voters to the polls and apply pressure to lawmakers. That said, Gov. Mike DeWine signaled his opposition to the concept in an interview with The Columbus Dispatch.

“No, I think that’s a mistake. I think you change the culture and you send a signal to kids,” DeWine said. “…If it’s legal, every kid, the message is it’s OK.”

Earlier this year, the state Senate passed a bill to allow doctors to prescribe medical marijuana for any patients, so long as the doctors believe marijuana would help with their symptoms.

Nineteen states and Washington, D.C. have legalized marijuana for personal use, according to the advocacy group NORML. Gallup polling indicates 68% of Americans support legalizing marijuana, the highest rate since the polling firm began surveying the issue in 1969. Roughly 83% of surveyed Democrats, 71% of independents and 50% of Republicans indicated support.