Ohio Vaccinations Speed Up While the Coronavirus Recedes

More than 1.1 million Ohioans have begun the two-shot vaccination process against COVID-19, just 11 months after the state health department first detected the new coronavirus in Ohio.

Photo: Parker Michels-Boyce/ For the States Newsroom
Syringes are prepped with the Moderna COVID-19 vaccine before being administered.
More than 1.1 million Ohioans have begun the two-shot vaccination process against COVID-19, just 11 months after the state health department first detected the new coronavirus in Ohio.

An analysis of state data shows the seven-day moving average of the number of Ohioans starting the vaccination process has slowly and steadily risen between the first shots Dec. 14 and early February.

About 30,000 state residents per day are starting the process, according to a seven-day moving average.

State health officials expect this figure to rise as they iron out kinks in a complex and temperature sensitive supply chain, the two vaccines on the market ramp up production, and the Johnson & Johnson vaccine presumably enters the market in the coming weeks. Meanwhile, new case rates and the number of Ohioans hospitalized with COVID-19 have steadily fallen since mid- to early-January.

As of Tuesday, a seven-day moving average of new cases sits above 3,200 new infections per day — a more-than-threefold reduction from early January.

There’s still, however, a viral minefield to navigate. When Ohio’s third COVID-19 wave began in earnest in October, there were about 900 new infections per day on average.

Plus, new variants of the new coronavirus have emerged, including one believed to be more infectious and another slightly resistant to available vaccines.

John Palmer, a spokesman with the Ohio Hospital Association, said there are 800 vaccine providers administering the two current COVID-19 vaccines. He said limited supply is what’s holding back mass vaccination in Ohio, not any process issue on the state’s end.

“There isn’t enough vaccine available to move faster,” he said. “When undertaking a massive and highly stylized distribution strategy that is based on daily and weekly decisions of allocation distributions, requiring unique storage and shipment accommodations, and arranging for eligible audiences to take the vaccine, requires a massive collaborative coordination process.”

Melanie Amato, an ODH spokeswoman, said ODH usually learns how much vaccine will arrive on the Wednesday of the week before. Most doses deliver on Monday, Tuesday and sometimes Wednesday.

Shipments to the ODH warehouse are usually on Thursdays and maybe Friday, she said, before going out to providers. It’s then up to the provider to schedule and put shots in arms, but ODH asks them to administer shots within 48 of receiving the shipment. 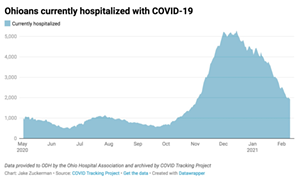 The first vaccines went out slowly. The first shots were prioritized for Ohio’s skilled nursing facilities (953 statewide) and assisted living homes (782 statewide), many of which are in rural areas.

Gov. Mike DeWine said in December that a whopping 60% of nursing home staff were declining the vaccine, a troubling sign of hesitancy during the immunization push.

Ohio Health Care Association Executive Director Pete Van Runkle, who represents elder care industry facilities, estimated the uptake rate has improved by 5- to 10%. He said he’s working with the Ohio Department of Aging on how to vaccinate those who turned down shots on their first go, along with new hires and new facility residents.

SEIU District 1199 WV/KY/OH, the union representing Ohio’s nursing home employees, said it is conducting education and outreach efforts among union members, but declined to answer whether more are taking the vaccine.

In a survey, members expressed concern about the vaccine, citing “trust issues” and concerns about becoming infertile after taking it — a baseless worry likely tracing back to internet misinformation on the vaccine.

On the upside, nursing home residents — who are at far greater risk for complications or death from COVID-19 — are taking the vaccine at far larger rates, according to CDC research.

“The data show that, without a doubt, the vaccine rollout is doing what it was intended to do,” he said. “Cases in long-term care settings are down 82% over the past four weeks. And now, greater numbers of older Ohioans within the community are getting vaccinated.”

In Ohio, 11,856 residents have died from COVID-19. However, officials said late Wednesday evening they had identified about 4,000 new deaths that had not been reflected in the system. Details are unclear but the deaths will be added in the coming days. Roughly 930,000 Ohioans have been infected.

Nationally, more than 470,000 Americans have died from COVID-19 of the roughly 27 million infected, according to data from Johns Hopkins University.

About 44 million Americans have been vaccinated against COVID-19, according to Bloomberg data.