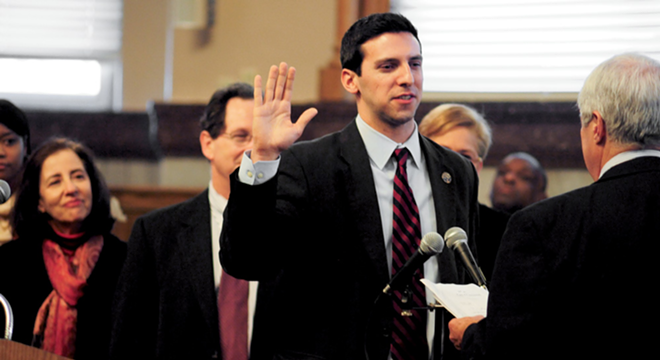 Editor’s Note: This is the third in a series of profiles on the four new members elected to Cincinnati City Council.

In preparing to interview newly elected Cincinnati City Councilman P.G. Sittenfeld, I was repeatedly visited by the temptation to ask him, “Are you as squeaky-clean as you seem?”

In 2010 I listened to him, then 25 years old, deliver a bright-eyed, five-minute distillation of a book he was writing on happiness, onstage at the Know Theatre. Later that year he began to frequent a café where I worked.

He was impeccably warm, courteous and dapper as I served his business lunches and coffee, and I wondered what he was all about.

For one thing, I find, Sittenfeld is all about writing. If any hint of a dark side reveals itself, it’s while he scrambles to think of a character from literature that he identifies with.

“Oh, man … I think it’s one of those things where, you know, you fall in love with characters despite their imperfections sometimes,” he muses, giving a shout-out to John Milton’s imagining of a certain charismatic underworld figure in his 1667 epic poem, Paradise Lost.

After more thought, he decides on someone less controversial: James of Roald Dahl’s James and the Giant Peach.

“Someone who’s on this journey,” Sittenfeld says, “with a lot of sort of unlikely friends, and there are obstacles but things end up working out.”

Sittenfeld’s own journey took him from Cincinnati to Princeton University, where he majored in English and American Studies, wrote for various news outlets including Time magazine and aspired to a career in narrative journalism. After graduate school at Oxford and a brief stint working for Google, he returned to Cincinnati, where he became — and still works as — assistant director of a nonprofit that helps turn local schools into community learning centers. He lives in Mount Lookout.

Somewhere along the way, his sights shifted from journalism to public service.

“I don’t think they’re as disconnected as it might appear on the surface,” he says. “I think good elected officials and good leaders, whether they’re in politics or not, need to be good storytellers. You need to tell the story of ‘this is where we are, and this is where we need to go.’ ”

But, he adds, “Ultimately, I don’t think it’s my job to tell people what’s good for them. It’s my job to ask them, ‘what do you want?’ and then help them get there.”

To that end, Sittenfeld says he’s been working to shine more light into City Hall by sending out a newsletter on the issues before City Council and by voting — without support — against two recent rule changes that now allow items to be kept off council and committee agendas indefinitely.

“I think there has to be room for dissent and minority voices, and often it is only by hearing all ideas that we can land on the best ideas,” he says.

While Sittenfeld stresses the importance of broad civic participation, he is unfamiliar with participatory democracy, the more inclusive model of self-government practiced by Occupy Cincinnati. But he expresses a vague sympathy with the movement, and a support for direct action.

“I mean, people are hungry, people are poor, people have health problems. And that takes a sort of generous measure of charity. But we also have structural problems, and I’m one of them now, I guess,” he says. “But that takes doing the marches, and holding the protests, and holding the rallies, to convince and influence the decision-makers that we can do things better, we can have a new set of rules.”

To have better budget deliberations, Sittenfeld says council plans to begin a series of open policy conversations to ask residents what levels of taxes they are willing to pay for the services they want.

When asked how council might help to heal the city’s long-lingering wounds of racial distrust, he points to City Hall itself: “We need to demonstrate collaboration and cooperation with each other, first and foremost.” But he soon segues from that subject into the two policy priorities he stands most firmly behind: access to education and economic opportunity.

“It doesn’t matter what color you are, you need to have — if you’re to get farther along — access to a job. If you’re a newborn child, you need to know that you’re going to start getting good education early on. So, I think those are the areas that the council needs to focus on.” ©