“MAGA forces are determined to take this country backwards,” Biden said during an address to the nation on Sept. 1. 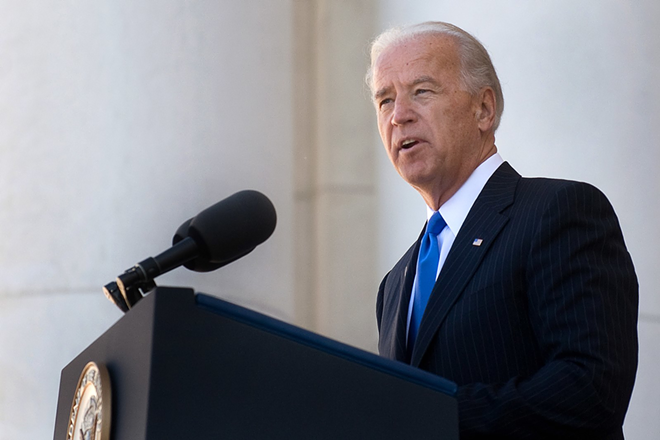 Photo via Wikimedia Commons
“MAGA forces are determined to take this country backwards,” Biden said during an address to the nation on Sept. 1.

President Joe Biden on Thursday, Sept. 1 issued a warning against what he described as “MAGA Republicans” and extremist threats to the nation, reminding Americans that democracy is not guaranteed.

“We have to defend it. Protect it. Stand up for it. Each and every one of us,” Biden said in his remarks, delivered outside Philadelphia’s Independence Hall. “That’s why tonight, I’m asking our nation to come together, unite behind the single purpose of defending our democracy, regardless of your ideology.”

Biden has largely refrained from talking about former President Donald Trump during his first year in office, referring to him as “the former guy.” But after a series of legislative victories, the Democratic president has shifted his tone as unsubstantiated claims of election fraud and political violence continue ahead of high-stakes elections this November.

The speech also comes amid an ongoing investigation into the Jan. 6, 2021, attack on the U.S. Capitol and after the F.B.I. served a search warrant at Trump’s Florida residence for classified documents last month.

Three minutes into his 30-minute-long televised speech, Biden named Trump directly, characterizing the former president and his supporters as representing “an extremism that threatens the very foundations of our republic.”

Trump plans to host a rally in Wilkes-Barre on Saturday to support Mehmet Oz and Doug Mastriano, the Republican nominees for U.S. Senate and governor in Pennsylvania.

The president clarified that he wasn’t referring to all Republicans, “not even a majority of Republicans are MAGA Republicans,” he said. Biden praised GOP members who have stood against Trump and MAGA Republicans, citing former federal Judge Michael Luttig, who called them a “clear and present danger to American democracy.”

Instead, he focused on individuals who “do not believe in the rule of law” or “recognize the will of the people.” Biden cited those who refuse to accept the results of the 2020 election and are already casting doubt on upcoming contests.

“They fan the flames of political violence that are a threat to our personal rights, to the pursuit of justice, to the rule of law, to the very soul of this country,” Biden said. “They look at the mob that stormed the United States Capitol on Jan. 6 — brutally attacking law enforcement — not as insurrectionists who placed a dagger at the throat of our democracy. But they look at that as patriots.”

Someone cannot be “pro-insurrectionists” and “pro-American,” Biden said. He also condemned threats, saying there is “no place for political violence in America” and described himself as “an American president, not a president of red America or blue America, but all America.” Addressing counter-protesters at the event, he said they’re “entitled to be outrageous.”

“The MAGA Republicans believe that for them to succeed, everyone else has to fail,” Biden said. “I believe America’s big enough for all of us to succeed, and that is the nation we’re building — a nation where no one is left behind.”

He referenced the 2017 white supremacist protest in Charlottesville, Virginia, which Biden previously said was a motivation for him to run for office. He also incorporated themes of unity, which he promised to do for America during his inauguration in January 2021.

Making a plea to save the nation’s soul, Biden called on Americans to come together, get engaged, and “vote, vote, vote” to preserve democracy.

“There’s nothing more important, nothing more sacred, nothing more American. That’s our soul. That’s who we truly are. And that’s who we must always be. I have no doubt — none — that this is who we will be and that we’ll come together as a nation. And we’ll secure our democracy,” Biden said, expressing his hope for the future. “We just need to remember who we are.”

Thursday’s speech marks Biden’s second visit to Pennsylvania — a battleground state with high-stakes elections this fall — in the past week. He will return on Monday to celebrate Labor Day in Pittsburgh, which hosts one of the largest and oldest Labor Day celebrations nationwide.