Funding public school districts through property tax will keep the poor where they are and the rich getting richer — not to mention keeping Cincinnati in what seems to be its perpetual segregated state. 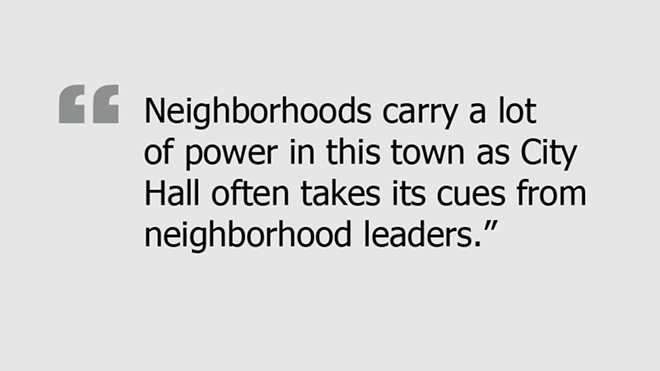 You know what we don’t talk openly about in this town? The connection between race and poverty.

You know what else we don’t talk about? How our 52 neighborhoods and their structure of governance contributes to segregation.

Let’s start at the root of the issue — education and state politics —and then let’s make our way down into the weeds of Cincinnati neighborhood politics.

Ohio funds public schools through property tax in Ohio. This is a terrible idea and helps keep Cincinnati segregated. This funding mechanism has also been deemed unconstitutional by the Ohio Supreme Court in a series of decisions between 1997 and 2002 — decisions some say still haven’t solved the problems.

Cincinnati Magazine ranked public schools in Greater Cincinnati districts from “best” to “worst” not too long ago. The schools were ranked on many factors — performance index score, state performance index grade, four-year graduation rate, teachers with a master’s degree, etc.

A cursory review of the list shows stark contrast in the racial and economic makeup of the schools.

For example, the “top” three schools are Mariemont, Madeira and Indian Hill. At the very “bottom” are Taft, Oyler and Woodward.

I take issue with this ranking, as some of the best teachers I have ever met work at Oyler (where I mentor on Monday mornings). But, at the end of the day, stats are stats and Oyler “underperforms” its peer schools in districts like Madeira and Mariemont. This, however, has nothing to do with the intelligence of the students or the quality of the teachers — it has to do with an unconstitutional public school funding mechanism and institutionalized segregation.

It does not take a rocket scientist to determine that funding public school districts through property tax will keep the poor where they are and the rich getting richer — not to mention keeping Greater Cincinnati in what seems to be its perpetual segregated state. Every child deserves a fair shot at the life they want, and right now they don’t have it.

Enrollment in Cincinnati Public Schools comprises 63 percent of all students in the city, and 70 percent of those students are “economically disadvantaged,” according to PLAN Cincinnati, the city’s 2012 document guiding planning and development.

If our city’s “renaissance” is to be worth anything in the long run, then this issue must be addressed and these students must be empowered to move up the economic ladder.

Supporting forward-thinking initiatives that attempt to fix the broken system like the Cincinnati Preschool Promise & CPS levy is a good place to start.

Voting in statewide elections is also an important way to start making change. Why? Because who represents our interests in Columbus matters, and having representatives who prioritize education and public schools, who are accountable to the tax payer, is important. Simply voting every four years will not help. Remember: Every year is an election year.

But the issue is deeper than the state, and also rests in the weeds of Cincinnati’s segregated neighborhoods and their resulting neighborhood politics.

Neighborhoods carry a lot of power in this town as City Hall often takes its cues from neighborhood leaders. If a neighborhood is well-organized, that neighborhood will likely thrive. If they struggle, then they most often continue to struggle. Furthermore, not every neighborhood community council is created equal. Some are quite robust and well-organized while others struggle to get folks to serve on their respective executive committees.

Now, like at Oyler — where some of the best teachers I know work — there are hard-working neighborhood activists pushing hard for change in neighborhoods no one talks about: Lower Price Hill comes to mind again; so do the Fairmounts, Sedamsville and Avondale.

There is no escaping the fact that Cincinnati is segregated. We put people in pockets called “neighborhoods” and they are asked to stay there (perhaps tacitly, but asked nonetheless). We talk about how great our system of neighborhoods is, but we also need to admit that’s part of the reason we stay stuck in a self-perpetuating cycle of segregation and poverty.

I personally love Cincinnati’s 52 unique neighborhoods, but I also spend enough time in all of them to know that this structure keeps certain communities at a standstill (unless a massive community development corporation comes in with millions of dollars to “redevelop”).

We cannot, as a city, simultaneously claim that our neighborhoods are great while not providing an infrastructure that helps them build out their internal governance. Until that day comes, and until we fix public school funding in Columbus, poor neighborhoods will likely stay poor.

We need to vote for pro-education people to serve in the statehouse, and we need to embrace all of our neighborhood councils and recognize how public school funding and lack of community council support are serving the same master of segregation. And, finally, we need to recognize how segregation is helping to keep people poor.

We need to admit that race and poverty are connected. I hear people say that they don’t “see color.” I hate to break it to you, but color does exist, and a person’s color often determines how they are treated. So does their economic status. So does their neighborhood of residence.

Mike Moroski is the executive director of UpSpring, a nonprofit working to keep children experiencing homelessness connected to their education. He is also a trustee on the Southwestern Ohio Workforce Investment Board (Youth Employment Subcommittee), a member of Cincinnati’s Human Services Advisory Committee (Homelessness Prevention Subcommittee) and a member of Mayor John Cranley’s Hand Up Steering Committee. Additionally, Moroski serves as a trustee on the board of Invest in Neighborhoods and is currently the vice president of the Sedamsville Community Development Corporation. He is also an executive committee member of the Hamilton County Democratic Party. Moroski’s self-described passion is fighting poverty and injustice — namely, the systems that keep people poor and society unjust. His columns will appear in CityBeat the first week of each month. CONTACT MIKE: [email protected]