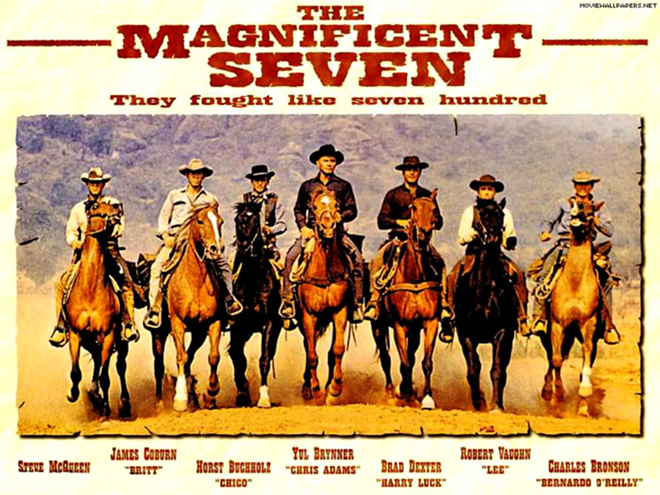 In recent movie news, there has been an announcement that a certain classic film franchise will be given a remake with a whole new cast. No, I’m not talking about Ghostbusters; I’m talking about the remake of theThe Magnificent Seven.

For those unaware: The Magnificent Seven was a 1960 western directed by the very underrated John Sturges. The story tells of seven gunmen who are hired by members of a poor Mexican village to chase away a bandit named Calvera (Eli Wallach) who has been harassing people and stealing their food and crops.

The movie was not just a traditional shoot ‘em up western; it was a film that took advantage of having seven characters and giving them all unique backstories. It’s also a film that is along the lines of George Stevens’s Shane, in that it’s a movie that doesn’t glorify the gunfighter’s life. It shows that each of them lead a rather unfulfilled life as a constant weary traveler.

The film also boasts a cast of legends. There’s Academy Award winner Yul Brynner as the cool and collected leader Chris; Steve McQueen as the drifting gunman Vin; Charles Bronson as the penniless and kid-friendly hired gun Bernardo O’Reilly; the voice of Mr. Waternoose in Monsters Inc. James Coburn as the silent knifesman Britt; and the late and great Wallach as Calvera the bandit.

It also has one of the best scores ever composed for a movie by Elmer Bernstein. Even if you’ve never seen the film you’ll recognize the music.

Now, like any film being remade, there will be a small crowd of people crying havoc and wanting to let slip the dogs of war, because there have been a lot of cases in which remakes haven’t turned out too spectacular. But many people often forget that The Magnificent Seven was actually a remake itself. It’s a western version of Akira Kurosawa’s classic Seven Samurai. It would technically later be remade by Pixar in A Bug’s Life.

I’ve long since went astray from being the angry Cinephile who went on long rants about how “Hollywood sucks,” and “Movies aren’t as good as they used to be,” and other such nonsense. Now these days I keep an open mind and to wait and see the film before I say anything.

Attached to direct the film is Antoine Fuqua, whose resume includes: The Equalizer, an adaptation of the hit 1980s show; 2004’s King Arthur; and Training Day, the film that earned Denzel Washington his second Academy Award win. Not a bad choice. I won’t claim he’s the best director, but he’s far from terrible. It could be worse; they could have Jonathan Liebesman directing it.

There have already been a couple casting choices made, including the aforementioned Denzel Washington, his Training Day co-star Ethan Hawke and even Star-Lord himself Chris Pratt has apparently signed on. That’s a pretty good cast in my book. But I’m just trying to imagine who else would be involved: Maybe they could get Jeremy Renner for one of the seven, and maybe a great character actor of today like Jon Bernthal, Steve Zahn or Barry Pepper. There are loads of possibilities.

I also see no problem in having Washington play the part of Chris the leader. In the original film, Chris is very calm and collected but just as intense, and a one-liner from him can let you know things mean business. I think Washington is perfectly capable of that.

The plot? From what I’ve heard, the plot is slightly different from the original. Apparently it’s about a widow (Haley Bennett) who hires Chris to help avenge the death of her husband who died at the hands of a gold baron and his thugs who have taken over her town. It could work and it’s a nice update to the original story.

To conclude: I’m sure the original 1960 film will remain superior, and a favorite of mine, but I am kind of looking forward to seeing this film and what it has to offer. Let’s not lose our heads and let’s see what the film has to offer. I hope it’s at least better than The Magnificent Seven Ride (1972).