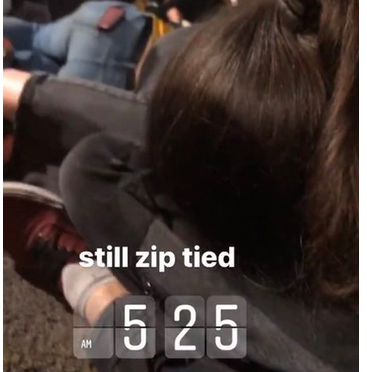 Multiple video posts on social media outlets shared with CityBeat claim a large number of individuals arrested last night at a protest in Cincinnati have been held outdoors overnight without food, water or blankets.

According to those posts made earlier this morning by at least three people claiming to be arrestees, a number of arrested protesters were held in the courtyard of the Hamilton County Justice Center after they were detained near the Hamilton County Courthouse a little after 9:30 p.m. last night.

Cincinnati Police and other law enforcement agencies arrested 171 people last night for protesting in violation of a 9 p.m. curfew set by the city. The rally at the courthouse was part of a series of protests against the death of George Floyd, an unarmed black man killed when Minneapolis police officer Derek Chauvin kept his knee on Floyd's neck for nine minutes during an arrest May 25.

Hamilton County Sheriff's Office says 100 of those arrested were held in what is called a sally port, which does not have a roof but does have four walls, as they awaited booking. The Sheriff's office has taken issues with the claim that the protesters were not treated well.

Local protests have been largely peaceful. Some windows were broken in Over-the-Rhine, downtown and CUF in the aftermath of two previous nights of protesting, though in news conferences, Mayor John Cranley has taken pains to stress that those acts were not believed to have been committed by protesters.

CityBeat has reached out to both CPD and the Hamilton County Sheriff's Office with further questions about the videos.

One account claims at least one arrestee needed serious medical attention, possibly CPR. One video shows a young woman in the same courtyard with a woman in nurse attire kneeling next to her.

"We've been here for nine hours," a woman says in one video filmed at roughly 7 a.m. "They haven't provided food, water or blankets. There are girls here in sports bras and shorts and it got really cold overnight. People are sleeping on concrete. It's really wild and unjust...we're being denied basic human rights and being forced to be in close quarters. There are so many people here."

In another video, a man in the same courtyard calls the situation "horrifying."

"There are like, 50 or 60 people here who all got arrested at once," he says. "They handcuffed us and brought us all in and have had us sitting outside for about 10 hours now. They haven't given us any water or food. Every time we ask them what is going on, they just stare at us...I don't know what to do. We need fucking help."

This story will be updated.