About three quarters of a .8 percent Hamilton County sales tax increase would go to transit under the plan board members approved, with the rest going to the county's $1 billion in infrastructure needs. 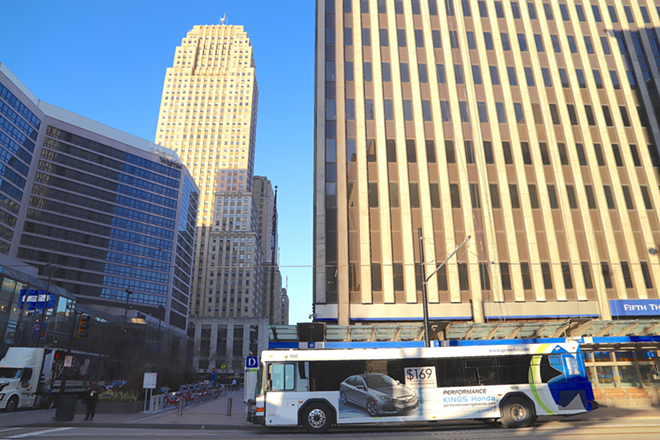 The board of the Southwest Ohio Regional Transit Authority today voted 12-1 to approve a plan for a Hamilton County sales tax increase to fund improvements to the region’s Metro bus system.

If voters approve, about 75 percent of the projected $130 million from the tax increase would fund a plan called Reinventing Metro. The plan promises eight new bus routes to and from employment centers around the county; expanded hours and more frequent service on existing routes throughout the week and on weekends; 24-hour service along six major corridors; new transit centers; smaller circulator buses and crosstown routes; and better service for people with disabilities.

“That’s a plan that should allow riders to use the system as a practical alternative,” SORTA Board Chair Kreg Keesee said. “Oftentimes we think of folks using the bus because it’s the only choice they have. We don’t want that to be the case in the future.”

The language approved by the board expressly forbids use of the tax levy money for Cincinnati's streetcar.

Another roughly 25 percent of the money raised by the tax increase would go to infrastructure repair that has at least some connection to transit — roads and bridges that transit uses on its routes. That money would be administered by the Hamilton County Public Works Integrating Committee, which is made up of officials from municipalities across the county.

Originally, SORTA officials estimated a .7-percent tax increase would be necessary to fund Reinventing Metro. But Keesee says Metro has become more efficient and sales tax projections have increased, meaning the major improvements could be done with the current proposal.

The tax increase would boost Hamilton County’s overall sales tax rate to between 7.55 percent and 7.8 percent, depending on whether a sales tax used to fund restoration of Union Terminal is allowed to lapse or used to fill budget gaps the county faces. If the bus levy passes, Hamilton County would have the state’s second highest sales tax rate behind Cuyahoga County’s 8-percent rate.

After protracted discussions, the levy now has the backing of the Greater Cincinnati USA Regional Chamber of Commerce, Hamilton County Commission and a number of city elected officials.

“By now, I think you know that the Cincinnati Chamber is all-in on transportation,” Chamber CEO Jill Meyer said at a news conference Sept. 30. “What we know is that our region will continue to grow only if we connect people to jobs and continue to attract more talent to our region.”

“We have been waiting for this action,” Hardy said. “SORTA has needed these dollars for a very long time… we will be at the front of this campaign. I plan on spending about 30 hours a day inside the city and the county talking to residents, voters, business owners, bus operators and educating them about what’s at stake.”

Since 1973, Metro has been funded by a .3-percent earnings tax levied by the city, along with scant state contributions and some federal dollars. That’s highly unusual — most large transit systems are funded by county taxpayers.

Metro, which hasn’t received an increase in funding from local taxpayers since 2002, currently gets by on $100 million a year.

But the bus system badly needs more funding. It faces a $5.8 million budget deficit this year and needs many millions of dollars in investment to become better-functioning and connect more Greater Cincinnati residents to jobs.

SORTA officials say the Reinventing Metro plan could substantively improve bus service if voters approve the sales tax increase. In the meantime, the bus system is in a tough spot.

Metro’s precarious financial situation hasn’t been helped by state funding. Ohio’s state funding for public transit per capita is among the lowest in the country. Some help will likely be coming to Metro’s budget via a 10.5-cent increase in the state’s gas tax, however, which will generate roughly $70 million more for public transit every year. But that money will need to be divvied up among the state’s 60 transit agencies.

Thousands of riders on SORTA’s Metro system face long, convoluted commutes, some riding for more than an hour and taking transfers to get from one Cincinnati neighborhood to another just a few miles away. Those riders include people like Whitney Harmon, whom CityBeat spoke to for an earlier story on Metro. Harmon rides the bus an hour each way from her home in Winton Terrace to her job as a cook downtown. Others face even longer commutes.

A University of Minnesota report last year ranked Cincinnati 39th in the country in terms of jobs accessible by public transit, even though the city ranks 26th in overall employment. The Cleveland metro area, by contrast, ranked 29th for transit accessibility, even though it ranked lower than Cincinnati (28th) for overall jobs. The Columbus metro area came in 25th for accessibility to jobs via transit, though it ranks 31st for overall employment.

Other peer cities like St. Louis, Pittsburgh, Indianapolis and Louisville, Kentucky also fare better in the rankings for overall accessibility, though Cincinnati did better than Nashville and Kansas City.

Of the Cincinnati metropolitan area’s 1,018,914 jobs, just 365 are accessible by transit within 10 minutes, according to the report. Another 2,157 are accessible within 20 minutes. Those numbers are lower than Ohio’s other big cities, and the gap gets even bigger for jobs accessible within 40 to 60 minutes. Both Columbus and Cleveland have more than 74,500 jobs reachable by transit in that time. Despite having more jobs overall, the Cincinnati metropolitan area has just 48,793 jobs you can reach via public transit in an hour.

After years of uncertainty about the financial state of Metro, Cincinnati City Council last month took a first step toward the new funding model by pledging to eliminate the portion of the city’s earnings tax that goes to Metro should a countywide levy pass. City voters will need to approve that change to the city’s charter.

Overall, the city’s income tax is 2.1 percent, meaning that eliminating Metro’s portion would lower the city’s earnings tax to 1.8 percent. That’s easily the lowest of any major city in Ohio.

“This will be the largest commitment to public transportation in the history of this county,” Mayor John Cranley said of the proposed levy. Cranley also highlighted the potential investment in infrastructure.