Cranley recognized first responders and touted city's highlights, but introduced few new initiatives in his remarks and managed to skim over most of the year's controversial moments 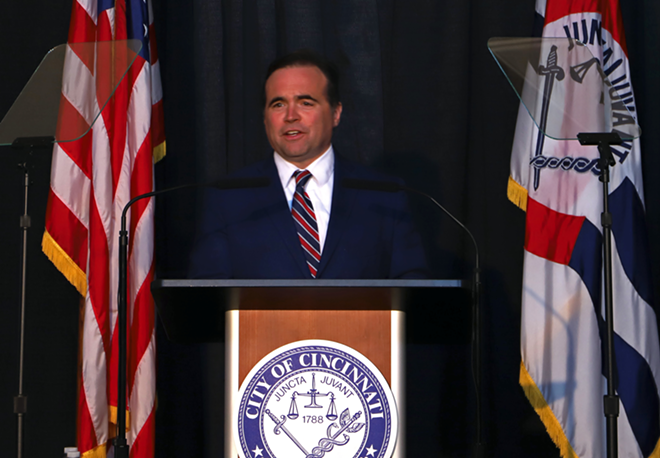 In a speech themed around the concept of "cavalry" — emergency responders, social service workers and volunteers — Mayor John Cranley this evening delivered his fifth State of the City address.

The mayor introduced few new initiatives, though he did outline boosts to efforts around poverty reduction and volunteerism. Mostly, however, the address was about touting the year's highlights while revisiting some of Cincinnati's more dramatic, sometimes tragic moments.

Cranley started his remarks by praising last year's Blink festival, using it for another metaphor about the passage of time.

"In the blink of an eye, it became obvious to all that the city is headed to future glory," Cranley said. "What Blink showed us in an instant was not created in an instant. It is a heritage of more than two centuries of our predecessors building the foundation upon which we are reaching ever higher. And I am proud to say that over the past year we have measurably added to that glory of our Queen City."

Among those glories: lower crime — shootings are down 13 percent from last year and a decade-long low, though the reductions are uneven, with assaults and murders up 20 percent in District 1 over the three year average, for example. A coming Major League Soccer franchise for FC Cincinnati also got big praise, as did a boost of about 900 jobs in the city.

There were challenges, too.

Cranley acknowledged struggles around the city's 911 call center, including the death of 16-year-old Kyle Plush. The mayor called Plush's death by suffocation after two 911 calls while he was trapped in his van a "monumental failure," but highlighted improvements he says will make the city's 911 service more reliable and responsive. Plush's parents attended the address and received a standing ovation.

He also spoke at length about the September mass shooting at Fifth-Third Center, honoring with videos the bystanders, 911 dispatchers and officers who responded to the shooting and standing ovations and holding a moment of silence for its victims.

He also highlighted another multiple-victim shooting that occurred nine days prior in the West End. Two people — Paul Coates and Mary Pritchett — were injured during a drive-by shooting meant for a suspected drug dealer who was targeted by a rival gang.

"We should all be as outraged by the shooting of Mr. Coates and Ms. Pritchett as we are about Whitney Austin and Brian Sarver, who were innocent victims on Fountain Square who survived. But regardless of little media attention and common knowledge of the West End shootings, do you know who did treat these victims the same and have sought the same justice as we did in the Fountain Square Shooting? The same cavalry who rushed to Fountain Square."

Beyond those tragedies, the mayor kept his remarks mostly positive, gliding past or not alluding at all to some of the more contentious situations that rattled City Hall and the city as a whole — the departure of City Manager Harry Black and resultant controversies, acrimony over FC Cincinnati's stadium in the West End and struggles over tent cities in downtown and Over-the-Rhine.

When Cranley did mention difficult moments, he used them to underline his theme of the cavalry and transitioned to the positive.

The mayor briefly mentioned the tent cities that caused weeks of drama over the summer. But there was no mention of legal wrangling and a ban on homeless camps by Hamilton County Common Pleas Court Judge Robert Ruehlman that has triggered a lawsuit by the ACLU.

Instead, Cranley quickly pivoted to praise for social service providers, specifically Bethany House and Sheltherhouse. The mayor highlighted $500,000 in city funding for a new Bethany House facility in Bond Hill recently passed by Cincinnati City Council in its budget closeout.

"As good as things have been, we know life isn't perfect, and we've had a few failures over the past year," he said. "One failure was allowing unhealthy housing conditions for our homeless."

"Mayor Mallory and I agree that FCC is the best cavalry of jobs and investment we can send to the West End," Cranley said, thanking the five council members who voted to approve the city's $34 million in infrastructure help for the stadium.

He did not, however, mention the deeply-felt argument within and beyond the neighborhood around that stadium, concerns about its effect on affordable housing there, or the plight of businesses there that must move in the coming weeks.

Cranley used the example of the West End shootings to highlight plans to step up work to address poverty, including initiatives like the city's Child Poverty Collaborative, by folding in 150 employers who have agreed to work to help low-income residents earn more and keep employment. Cranley also promised to "better leverage existing and proven social service providers," including Talbert House, Legal Aid and Cincinnati Works, among others. Cranley pledged those efforts would serve 5,000 families and 10,000 children over the next five years.

That's a much-needed goal: recent studies suggest the city and the region face continuing deep issues around racial and economic equity. The challenge may be growing, as well — in 2017, 27.7 percent of Cincinnatians were below the federal government’s poverty threshold, according to Census estimates — about $12,000 for a single person or a little less than $25,000 for a family of four. That includes almost 40 percent of the city’s black residents and about 16 percent of the city’s white residents. Those levels represent an uptick over the past few years, even as state and national poverty levels have dropped.

Activists protesting outside the address said they were highlighting one of the city's equity issues: problems with combined sewer overflows around the city and region, rising sewer rates and lack of a program to help low-income customers of the city's Metropolitan Sewer District and Water Works.

About a dozen people representing South Cumminsville-based Communities United for Action stood outside the State of the City Address.

"We're here to tell folks what's not happening in the city and county," group member Florence Miller said. According to Miller, the group presented its "Sewer Justice Platform" to Cranley yesterday, and the mayor and the group will meet again in two weeks to discuss solutions to the problems CUFA outlines. The city and county face $3.2 billion in sewer upgrades after a consent decree from federal courts ordered fixes to the region's sewer system — an effort that has had a number of difficulties in recent years.

The mayor did outline other environmental efforts the city is making, including a coming 25-megawatt solar panel installation that will reduce the city's municipal carbon emissions by 25,000 tons a year, and the city's 2030 District, an area downtown where property owners will voluntarily cut their transportation emissions and energy and water use by half by the year 2030. Kroger will become a founding member of the district, Cranley announced tonight. Both efforts are part of the city's Green Cincinnati plan released earlier this year.

Cranley closed his remarks by asking city residents to boost their volunteering efforts. At his last address, he set a goal for 100,000 volunteer hours from Cincinnatians. He says residents exceeded that, clocking 167,000 hours. Next year, he says, he'd like to see Cincinnatians get to 250,000.

"In the old west, the cavalry was all volunteer," Cranley said. "So I am asking all of you to become part of our city's cavalry of hope by volunteering."