The Cincinnati Streetcar Will Be Free to Ride — Permanently — Starting Nov. 1

After eliminating streetcar fares for 60 days (through October), Cincinnati City Council has passed an ordinance to make free rides permanent 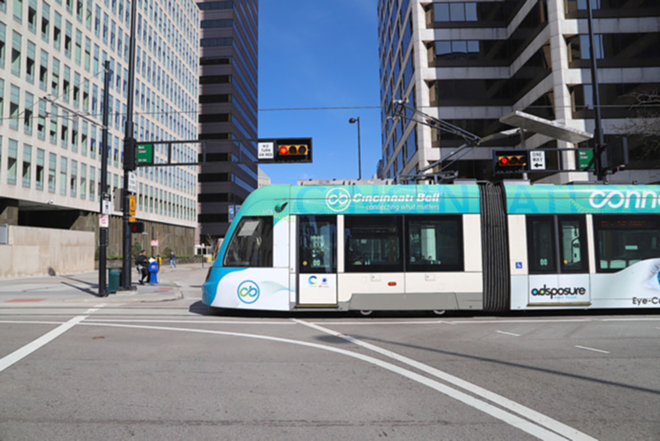 The Cincinnati Streetcar (aka Cincinnati Bell Connector) will be free to ride, forever, starting Nov. 1.

We are Fare Free permanently!Thank you to all involved! Hop on, hop off #Cincinnati and support our local businesses! https://t.co/HfONaeWrak


But it was a slightly winding road to get to this point.

Then, earlier this month, council voted to make the fare elimination permanent — beyond those 60 days — with an ordinance modifying the municipal code to "allow for lawful, fare-free rides" on the streetcar.

A request for public comment during Tuesday's meeting of the Major Projects & Smart Government committee, headed by council member Greg Landsman, was the final step. The Federal Transit Administration required that people had time to voice their opinions before the fare-free ordinance was enacted. (An emergency ordinance allowed the city manager to receive $566,610 in federal CARES Act dollars via a grant from the FTA to fund streetcar operations, thus the required public input.)

Streetcar Director Travis Jeric said during the Major Projects & Smart Government meeting that the restart of the Connector has gone very smoothly, although ridership is down due to the pandemic and decreased hours. But, he said, "We are pleased with how the fare-free efforts of city council have resulted in ridership onboard the streetcar."

Streetcar passenger service was suspended during the beginning days of the pandemic, but continued to run without passengers to keep it operable.

September's council vote capped off a lengthy fight that had been raging since June, when Mayor Cranley vetoed council's initial fare-free legislation during the city's budget process. Council also batted down Cranley's attempt to keep the streetcar from running without fares — an ordinance that would have used streetcar fares to pay for extra police presence in places like OTR's Grant Park that have seen gun violence during an historic uptick in shootings this year. But a number of council members questioned the efficacy of that plan, saying it would take more than a few more police officers to solve the problem of neighborhood violence.

Cranley said the streetcar mostly benefits wealthy downtown residents at the expense of the city's working poor, who still have to pay for bus fare.

"If it’s desperate, we should not be giving fares away," he said. "The fact is, bus riders have to pay bus fares. If they have a user fee, why is it fair that streetcar riders, who have been heavily subsidized anyway, don’t? If you don’t want to put it into police visibility, why not put it into the social work you’re suggesting?”

Vice Mayor Christopher Smitherman was the only council member to vote for Cranley's plan. He said that during debates over the streetcar early last decade, taxpayers were promised they wouldn't have to subsidize the streetcar. Now, riders aren't paying anything for it, he said.

But council member Jan-Michele Lemon Kearney had another view. She opposed the streetcar during the public debate before its construction, she said, but now that the tracks are in the ground she wants it to be successful. "I think that our job now, now that we have it, is to make it a success," she said. "We learned this summer that it was less expensive to run the streetcar than it is to not run it. We’ve seen it run without anyone on it… that seemed ridiculous to me. We can do better than that.”

Kearney also expressed concern that fare revenues might not bring in enough to cover the cost of collecting the fares. Last year, the city came out about $70,000 ahead on that equation — and that was without a global pandemic that has dropped ridership significantly, she said.

"You can throw money and police at every issue," he said. "The reality is, what we're experiencing all over this city is chickens coming home to roost from policies that were racist and classist, including not investing in transit."