FC Cincinnati officials say they've moved on to Oakley and Newport, but rumors have swirled that they're still considering the neighborhood 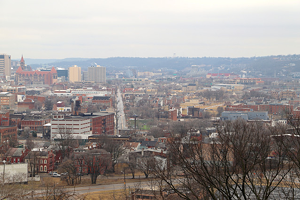 The West End Community Council’s March 20 vote at the neighborhood’s Lindner YMCA took place the old fashioned way, with the council’s 10-member executive board calling out the names of each of the council’s 192 registered members.

Membership in the community council has nearly tripled in recent weeks, council president Keith Blake has said, as the debate intensifies over whether or not the neighborhood welcomes a potential $200 million soccer stadium that could be built by FC Cincinnati.

The answer, at least coming from the group of 100 gathered in the Y’s multi-purpose room: “No.”

Of those who showed up for the meeting, 65 were dues-paying members eligible to vote. Fifty votes against the stadium, including at least one “hell to the no,” rang out as community council financial secretary Robert Killins Jr. called the roll. Ten attendees voted yes, five abstained.

At least some of those who voted had their $7 council dues paid by a coalition of groups opposed to the stadium, community council president Blake says. The coalition paid for 102 council memberships. Seven of those were for people who don't live in the West End. One non-resident voted at the meeting, and his vote was disqualified.

Of those 102 people whose dues were paid by the coalition, seven showed up to vote at the meeting, including the non-resident, the West End Community Council said Thursday.

Greater Cincinnati Homeless Coalition Executive Director Josh Spring, a member of West End United, admits the group paid the memberships. He says the group is simply organizing residents who are already opposed to the stadium, and that their door-knocking in the neighborhood reveals that most residents don't want the stadium there.

Blake has expressed frustrations with Spring and says the coalition has been working to influence the outcomes of meetings since February. But says he doesn't think the coalition's payment of membership dues ahead of the most recent meeting specifically swayed the outcome.

"I honestly don't believe so," he says. Blake, who voted to support the stadium, points out that after the February meeting, 31 residents opposed to the FCC stadium signed up for council membership. "At that point, I knew we had more people opposed."

They too may have been funded by the coalition, Blake says, but he doesn't have concrete proof of that.

Without the 31 members who registered in February and the 102 who had their dues paid by the coalition recently, the council would be 59 members strong.

Others at last night's meeting didn’t realize the dues were required to vote protested, fearing their vote against the stadium wouldn’t be heard.

“We have a community of thousands of low-income black people who may not have seven dollars but should have the right to vote,” said one attendee who says he’s lived in the neighborhood since 1952.

That attendee, along with a line of others at the meeting, echoed sentiments that have resounded throughout the debate and defined the misunderstandings inherent in it.

The West End, home to roughly 6,000 predominantly black residents who make a median household income of about $15,000 a year, has been the site of continued disappointment for black Cincinnatians. The memory of traumatic events like the mass displacements of Kenyon Barr and frustration over disinvestment the neighborhood faces today have continually cropped up during discussions about FCC.

Not everyone in the neighborhood opposes the stadium. Supporters from the community have also consistently come to public meetings to tout the potential economic benefits of an FCC presence in the West End. The community council's executive board passed its own resolution 5-4 recommending the council welcome FCC last week.

Blake says he thinks the vote is representative of the council, but says he can't speak for the whole neighborhood.

FCC says it has done polling suggesting 75 percent of the neighborhood's residents support the stadium, but there has been little detail about those surveys so far, and those showing up at public meetings opposed to the project have generally outweighed those supporting it.

The council’s general body vote was perhaps as much cathartic as it was about deciding the fate of the stadium, a fact that some attendees decried as yet another sign that West Enders don’t have much power over what happens in their neighborhood.

The Cincinnati Public Schools Board of Education really has the final say in the matter.

FCC wants to build its stadium on land owned by CPS and occupied by Taft High School’s Stargel Stadium. The board must approve a land swap with the team. So far, those negotiations have not gone swimmingly.

FCC said last week that it has closed the door on considering the West End after wrangling with the board over tax payments. The board wants FCC to pay the same rate as any other commercial property under the city’s current, nearly two-decades-old tax abatement policies. By the board's reckoning, that could amount to as much as $2 million a year. FCC wanted to pay $750,000 a year. That, they said, was their final offer. The team gave the school board until 5 p.m. March 16 — the day the offer was made — to decide. That deadline came and went, and the team has said publicly it is moving on.

But rumors have swirled that the team is still interested. A coalition of neighborhood groups that does not include West End’s Community Council, called West End United, released a statement after FCC’s final deadline saying that officials had been in the neighborhood to talk about a prospective community benefits agreement.

The team later said a proposed CBA was too expensive, placing the cost at $50 million — a number neither West End United nor the community council says it came up with.

FCC officials quoted that number in a statement saying that it was moving on from the West End to consider Oakley and Newport as its remaining sites. FCC would like to nail down a location by March 31, team officials say.

But even Blake, a generally cautious player in the FCC drama, says he’s not sure the team is quite done with the West End. Blake was one of the five West End Community Council executive board members who voted last week to recommend that the West End accept the stadium, should it come. Four other board members voted no. One abstained from voting.

"What I can tell you is it's not dead yet," Blake told the crowd of a potential deal. By his reckoning, the potential deal won’t be over until the CPS board votes today on a resolution that solidifies its stance on FCC.

Should a deal break between CPS and the team, West Enders want to remain at the table: the council’s general body voted overwhelmingly to participate in bargaining around a CBA should a stadium go forward against their wishes.

This story has been updated with the number of people who voted after the Greater Cincinnati Homeless Coalition paid their dues.