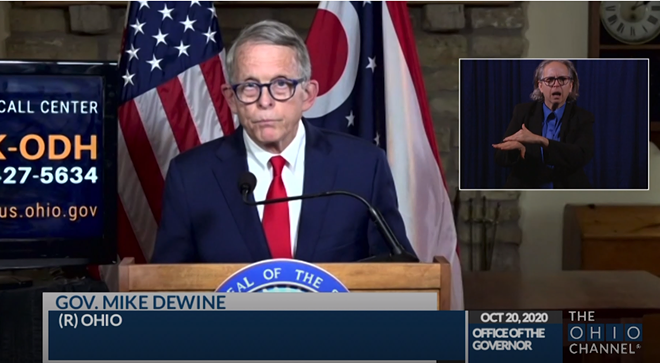 Photo: The Ohio Channel
Ohio Gov. Mike DeWine is seen at a coronavirus press conference at his Cedarville home on Tuesday, Oct. 20, days after a Miami County man reported to police being recruited for a citizen's arrest plot against the governor at his home.

Despite what President Donald Trump says, Ohio seems far from rounding the bend on coronavirus. And his statements appear to be making it harder to fight the disease.

During a Circleville campaign rally in late October, Trump said that as of Nov. 4, the media wouldn’t be talking about the pandemic anymore. But on Nov. 5 and with the outcome of a historic presidential election still somewhat in doubt, Gov. Mike DeWine’s 90-minute press conference was almost entirely about COVID-19.

It’s not hard to see why. Despite Trump’s implication that reporting on coronavirus was mostly a media ploy to sabotage him, it’s savaging populations in Ohio and across the country.

Ohio on Thursday again smashed its record for new cases over the past 24 hours with 4,961.

With seemingly out-of-control spread in virtually every corner of the state, DeWine again implored Ohioans to redouble efforts against it.

After making the appeal, DeWine announced a major overhaul of his health team, which has been eroded in part through the activities of people who, like Trump, don’t believe coronavirus is nearly as big a deal as public-health professionals are making it out to be.

After being the public face of DeWine’s coronavirus fight for months, former Health Director Amy Acton resigned in July amid withering criticism from coronavirus doubters that even culminated in armed protests in front of her house. In September, DeWine announced a replacement for Acton, only to see her withdraw just hours later, saying she wanted to protect her family from the harassment that health directors have been facing across the country.

Lance Himes, an attorney, has been acting director ever since. DeWine on Thursday announced that he’d be replaced by Stephanie McDowell, who had been the administrator of the Ohio Bureau of Workers Compensation.

“I need a person who can focus on administration, making things run, getting the (eventual coronavirus) vaccine out,” DeWine said.

But even with his retooled team, DeWine faces difficulty getting millions of Ohioans to take his recommendations and orders concerning the virus seriously. For example, Tuesday’s election was big for lawmakers who have sought to undermine the steps the governor has taken against the coronavirus. It might even deliver them majorities willing to overturn a DeWine veto.

DeWine was asked whether Trump’s strong performance in Ohio was a repudiation of mask-wearing and social-distancing requirements and other steps the governor has taken against the spread of the disease.

“That would be kind of interesting since I not only endorsed the president, I was his (Ohio) co-chair,” he said. “So it would be sort of strange for someone to walk in and say, ‘I want to repudiate Mike DeWine, but I’m going to vote for Donald Trump.’ It doesn’t sound to me like it makes a whole lot of sense.”

Sensible or not, even as he said it, the governor’s Twitter critics were echoing Trump, questioning mask use and other coronavirus recommendations.

Even so, DeWine kept trying to get the word out.

“By and large, the wearing of a mask dramatically changes your odds,” he said.

This story originally appeared in the Ohio Capital Journal