Spoiler alert: It's a lot of St. Patrick's Day events. 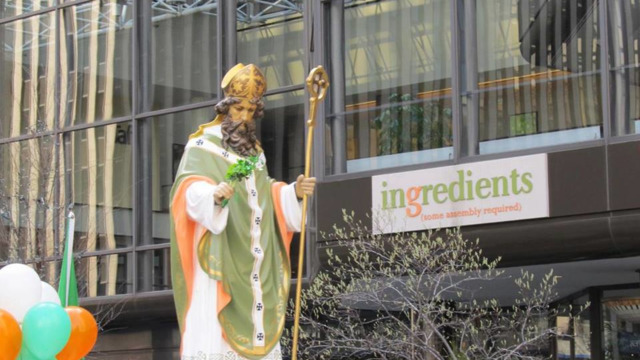 Photo: Provided
A past St. Patrick's Day parade in Cincinnati

Although St. Patrick's Day is officially on March 17, plenty of Cincinnatians are celebrating this weekend with kegs and eggs, parades and pints of Guinness.

Here are 11 things to do, and a couple of them aren't related to drinking green beer.

Mozart & Mazzoli with the CSO
Missy Mazzoli is no longer “the 21st century’s gatecrasher of new Classical music,” as NPR proclaimed in 2018. She’s now firmly inside the seemingly intractable fortress — an acclaimed composer whose works are commissioned and performed by major ensembles throughout the world. On March 11 and 12, the Cincinnati Symphony Orchestra will present Mazzoli’s violin concerto — “Violin Concerto (Procession)” — a co-commission with the National Symphony Orchestra, performed by Mazzoli’s frequent collaborator Jennifer Koh. During the concert, the May Festival Chorus will also sing Mozart’s “Mass in C Minor.” While Music Hall recently updated its COVID policies, those don't go into effect until March 14. Masks and proof of vaccination or a negative COVID tests are required for these performances. Read an interview with Mazzoli and Koh at citybeat.com. 7:30 p.m. March 11 and 12. Tickets start at $14. Music Hall, 1241 Elm St., Over-the-Rhine, cincinnatisymphony.org.

Cincinnati Cyclones "Coneys" Game
Sometimes the Cincinnati Cyclones are good enough to eat. The Cyclones will test that theory on Friday, when the team becomes the Cincinnati Coneys for a home game against the Wheeling Nailers. The local food theme continues in that night's giveaway: a bobblehead of Cyclones — er, Coneys — head coach Jason Payne holding a big-old Skyline three-way (available to the first 3,000 ticketed fans). The team also will be wearing Coneys jerseys on the ice. The puck drops at 7:30 p.m. March 11. Tickets start at $19 and are still available.  Heritage Bank Center, 100 Broadway St., Downtown, cycloneshockey.com.

Yola at the Taft Theatre
Stories abound of how musicians navigated the full-stop nature of the pandemic. For English singer-songwriter Yola, the extended COVID-19 pause gave her a chance to do a deep dive into herself with Stand For Myself, the follow-up album to her critically-acclaimed 2019 debut Walk Through Fire. While her introduction to the public came as a Country-Soul force of nature who earned multiple Grammy nods, including Best Americana Album and Best American Roots Performance (despite hailing from Bristol, England), the woman born Yolanda Claire Quartey has expanded her stylistic palette considerably with Stand For Myself. Read an interview with Yola at citybeat.com. 8 p.m. March 12. Tickets start at $27.50. Taft Theatre, 317 E. Fifth St., Downtown, tafttheatre.org.

Cincinnati St. Patrick's Day Parade
The day has come for the Irish of Cincinnati — and those who wish they were — to dance, drink and party through the streets of downtown. And it's something they've been waiting a while for. On Saturday, the 54th St. Patrick Day Parade will step off from Mehring Way near Paul Brown Stadium after taking a two-year hiatus due to the pandemic. More than 80 different entries will join the procession — traditional Irish step dancers, festive floats, bagpipers, local families, marching bands from city schools — as it makes its way from the stadium and up Joe Nuxhall Way to Freedom Way at The Banks. Noon March 12. Free. The Banks, cincystpatsparade.com.

Irish Heritage Center of Cincinnati St. Patrick's Day Parade Afterparty
Raise a Guinness and do a jig. The Irish Heritage Center of Cincinnati is hosting the afterparty following the city's St. Patrick's Day Parade. The center and its Thatched Roof Irish Pub open at 3 p.m. for authentic Irish merrymaking to continue into the night. The party will be filled with "Irish food, music, dancing, games, arts and crafts, genealogy, and storytelling," according to a press release. You may get lucky and catch a selfie with St. Patrick himself, who is rumored to be walking the halls of the afterparty.  IHC doesn't require attendees to be Irish — the only requirement is being open to having a good time. 3-10 p.m. March 12. Free admission.  3905 Eastern Ave., Columbia Tusculum, irishcenterofcincinnati.com.

Art on Vine
If you’re looking for some March madness that isn't related to basketball, look no further than Art on Vine’s “Local Madness” event this weekend. Over 80 local artisans will set up shop inside of Rhinegeist Brewery for the pop-up market's first indoor March event since the beginning of COVID-19. Organizers want patrons to come and celebrate the end of an era as the statewide shutdown began March 13, 2020 — just two days before an Art on Vine event. Grab a beer from the brewery and a snack from OTR Chili and celebrate spring with tons of local artists and makers. Noon-7 p.m. March 13. 1910 Elm St., Over-the-Rhine, artonvinecincy.com.

John Mulaney at the Heritage Bank Center
Comedian John Mulaney brings his "From Scratch" tour to Cincinnati. Mulaney is an Emmy-winning stand-up whose credits include Netflix specials of his tours The Comeback Kid and Kid Gorgeous. A former writer for Saturday Night Live, he also created infamous characters like Bill Harder's Stefon. This new tour comes after Mulaney separate from his wife, baby with actress Olivia Munn and sought treatment for various addictions and, one can assume, the "From Scratch" title is a likely nod to starting over. 5:30 p.m. doors March 13. Tickets start at $39.50. 100 Broadway, Downtown, heritagebankcenter.com.

Ira Glass is Coming to Dayton on His Limited Tour: Seven Things I’ve Learned: An Evening with Ira Glass