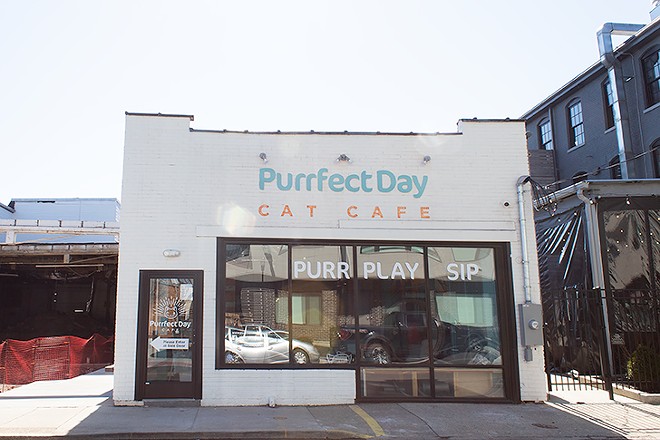 At Purrfect Day Cafe in Covington, it’s imperative that guests watch where they sit. No, there isn’t assigned seating or a mean girl “cool table” mentality, but in the cat room, there are between 20 and 25 friendly felines making themselves comfortable lounging in pet beds and baskets, nesting on wall perches and even snuggling beneath blankets.

During a recent visit, cafe owner Chuck Patton issued the important reminder to peek before you plop while motioning toward a furry pink throw draped across a white couch. Underneath, a tortoiseshell cat was slumbering, like a tricky Where’s Waldo?, her form hidden from view, making a barely visible lump in the fabric. To the cats at the cafe, this is their home — at least until they’re adopted — and, even though they’ve all been behavior tested, none of them likes being sat on (as one can imagine).

“We are looking for cats that have been socialized,” Patton says. “(Our shelter partners) make sure that they're a good fit, not only to be around other cats, but to be around people.” 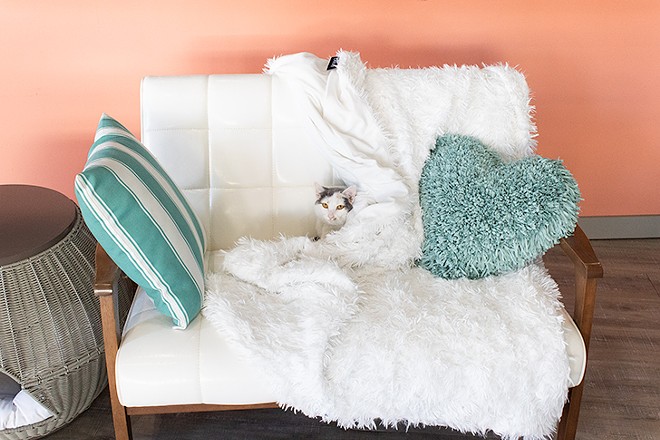 Photo: Danielle Schuster
There is an average of 20 adoptable cats at Purrfect Day, and more during kitten season (early spring to summer).

Purrfect Day works with three Tri-State-spanning animal rescues — Kenton County Animal Services in Northern Kentucky, Cincinnati Animal CARE Humane Society in Northside and P.A.W.S. of Dearborn County Humane Center in Lawrenceburg, Indiana — to get their cats and kittens. All of the cats at the cafe are adoptable and all have all been spayed or neutered, are dewormed, are up-to-date on their shots and are FeLV- and FIV-negative. If you fall in love with a cat, you can fill out an adoption form on-site and work with an adoption supervisor to bring your new furry friend home as soon as the same day. Each session in the cat area costs $15 and lasts 50 minutes. Reservations are available online.

“Our cats tend to be super friendly and super affectionate,” Patton says. “And that is what gets them adopted. It's not necessarily, ‘Oh, this one looks like that. This one looks like that.’ It's the cat that, you’re sitting and you have your glass of wine and then this cat just immediately climbs into your lap and wants you to pet it. And somebody says, ‘Hey, I’ve got to bring this cat home.’”

A native of Fort Thomas, Kentucky, Patton opened Purrfect Day in November of 2020. He also runs a Purrfect Day Cafe in his current town of Louisville, which he opened in 2018 (in 2021, the Louisville location adopted about 1,700 cats). The original inspiration for Purrfect Day came from a cat cafe Patton saw while visiting South Carolina, and the idea to open a branch in Covington was the result of a conversation with the director of Kenton County Animal Services.

“We had had such success in Louisville and I thought how great would it be if I could take this success and kind of bring it into the Tri-State area where I grew up,” Patton says. “What has been amazing is that this community has just absolutely embraced it.” 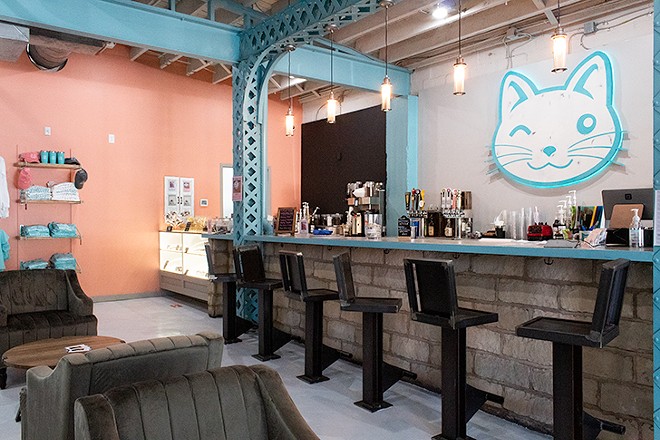 Photo: Danielle Schuster
The bar at Purrfect Day Cafe serves pastries, coffee, tea and alcohol. A window on the far right of the bar looks into the cat room.

If you’re paying a visit to the cat room, Purrfect Day recommends you come 15 minutes prior to your reservation to grab a drink or snack from the cafe. The menu — which features soft pretzels from Dayton, Kentucky’s Tuba Baking Co., as well as pastries, “paw-corn” and a full bar — is full of feline puns. There are “meowmosas,” a selection of “purrbons” and specially brewed beers from Northern Kentucky’s Darkness Brewing and Braxton Brewing Co. The cafe also offers “kitt-teas” and hot or iced “paw-fee,” including a frappe called the Smelly Cat.

“I think the most important thing to point out is that the cat portion of it — where the cats live and hang out and interact with customers — is completely separate from the area with the bar. So the misnomer is, ‘I'm going to be coming in there and there's going be cats everywhere and I'm going to eat and drink where the cats are.’ And that's simply not the truth,” Patton says.

The cat room and the cafe are self-contained spaces, separated by glass, with individual entry doors and their own HVAC systems. Food is not allowed in the cat room (and cats aren’t allowed in the food room), but guests can bring in their drinks, including alcoholic beverages. 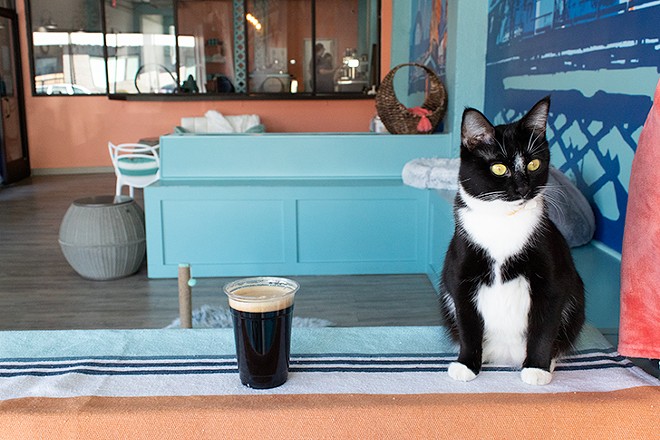 Photo: Danielle Schuster
Drinks are allowed in the cat room, but not food.

Patton says he sees plenty of guests visit the cafe who are allergic but enjoy the cats’ distant company, as well as those whose partners are allergic to cats. The separate systems and viewing windows allow for contained experiences.

“Our patrons are about 70% snugglers, 30% adopters,” Patton says, noting the snugglers are an important part of the Purrfect Day operation.

“(The cats) have been through trauma, right? They’ve been out on the streets, somebody finds them, somebody surrenders them, then they go into a shelter. Then a lot of times they go through a major surgery — a spay/neuter — and then they get put back into a crate and they come to the cafe. There’s a lot of stress there,” he says. “And our goal is to destress that. That's where the 70% cuddlers come in — they just make sure that the cats feel safe, make sure that the cats are loved on. And then when that happens, it really completely changes (the cat’s) personality for the adopter that is coming in.”

The end goal for the cat cafe is to get these animals into forever homes.

“What I embrace is clearing out the end of the pipe. By getting all these animals adopted, the shelters hear about it and they say, ‘You know what, (now) we can do more outreach. Now we can take in more cats; we can vet more cats,’” Patton says.

Patton tells a story about how Purrfect Day’s model helps get cats adopted, and quickly, in ways that some shelters can’t do on their own.

“What's special to me is shelter directors from rural parts of our states, they literally have cats — this happened two weeks ago — that have been sitting in cages since August, and then they come to the cafe and they're very sweet and they get adopted within a week,” he says. “And that just is heartwarming to watch (the shelter’s) reaction to that.”

In addition to the cat room, the cafe offers space for private parties and meetings and hosts events, including yoga with cats and trivia nights. It also supports surrounding shelters by donating 50% of its tips to a general fund. Patton says Purrfect Day recently was able to give $3,000 to P.A.W.S. in Lawrenceburg.

He and his team are also hoping to host some dog-friendly events outdoors this summer, possibly modeled after his successful “Hot Diggity Dog” event in Louisville that has adoptable puppies and hot dogs. Patton and his wife, Tricia — who designed the interior of Purrfect Day — have also purchased the old townhome next to the cafe and are renovating it to become a pet-friendly Airbnb, with an outdoor gathering space connecting the two buildings.

But all of this wouldn’t be possible without the community.

“Our mission is expanding throughout the Tri-State and especially helping out some of these shelters that don't have the resources to do that,” Patton says. “If you pay the fee to go into the cat room, obviously you're keeping our lights on. If you are coming in and you are tipping, that is getting donated. There are people that have this assumption, I’ve even had really close friends say, ‘I look forward to coming to see you. I’ll come see you when I'm ready to adopt.’ I'm like, no, I have a bar here — coffee, teas, all that other kind of stuff. Like, if you’re going to have a drink anyway, you might as well (have it here).”

“If you cross our threshold, you are helping out,” he says.

Purrfect Day Cafe is located at 25 W. Eighth St., Covington. For more info or to book a reservation, visit purrfectdaycafecovington.com.