An energetic "Midsummer" for a brand-new theater 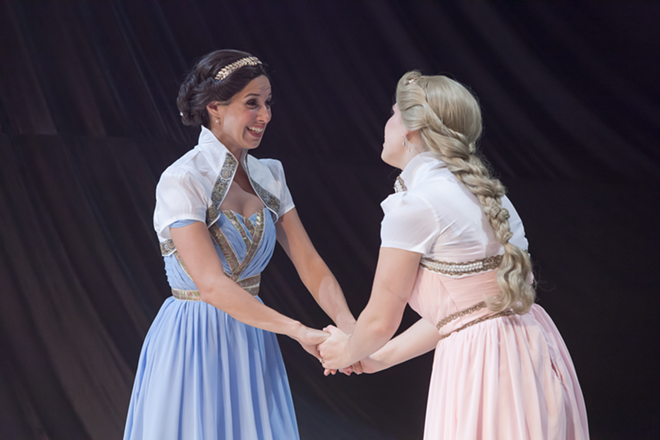 William Shakespeare’s comedy A Midsummer Night’s Dream focuses on the power of transformation, which makes it an especially timely choice for Cincinnati Shakespeare Company, a 24-year theater company with a sparkling new venue in Over-the-Rhine — The Otto M. Budig Theater. A show written to engage and delight Shakespeare’s public when first performed in 1605, Midsummer is just right for this modern theater’s inaugural production. As directed by Brian Isaac Phillips, it shows off all the impressive technical capabilities of the new building as well as all the energy its actors can offer.

Midsummer has multiple stories, but at the center there’s a love quadrangle. As Cincy Shakes’ promotional material puts it, “Lysander loves Hermia. Hermia loves Lysander. Demetrius loves Hermia. Helena loves Demetrius. No one loves Helena (poor Helena).” Of Midsummer’s stories, I have tended to find this one the least interesting — but not this time. That’s due almost exclusively to the chemistry between Courtney Lucien’s Hermia and Caitlin McWethy’s Helena. As the storyline gets ever more complicated with the introduction of fairies and bewitching love potions, Lucien and McWethy dial up the antics, displaying fast wit and physical comedy.

In a second thread, Midsummer explores a dark forest full of mischievous fairies and sprites. Capricious fairy monarchs Queen Titania (Miranda McGee) and King Oberon (Giles Davies) both lay claim to an orphaned child — played by a creepy Labyrinth-style puppet I’m sure will visit me in nightmares. Cincy Shakes has taken a glam-rock approach to the fairy world, drawing visual inspiration from ’80s vintage Bowie. In Amanda McGee’s costume designs, Oberon and the fairies sport no cheesy wings; one gets the feeling they fly through the power of black spandex alone.

Midsummer’s most famous fairy is Puck (“Lord, what fools these mortals be!”), portrayed by Cincy Shakes’ mainstay Sara Clark. In one of the many ways this production shows off the technical capacity of the new theater, Clark engages flying rigs to “put a girdle round about the Earth,” soaring in wide circles over the audience’s head. The effect is enchanting, though not as surprising as it could be — before Clark’s first flight, other fairies use the rigs to dangle somewhat unimaginatively above the audience, distracting from one of Titania’s speeches. Clark’s flights are more athletic and impressive, as is the rest of her performance.

Finally there is the play-within-a-play by a band of five well-intentioned but clumsy actors. On the stage, these scenes are marvelously slapstick-y, the cast made up of such Cincy Shakes regulars as Kelly Mengelkoch, Paul Riopelle and Justin McCombs (plus McCombs’ own show-stealing beagle, Ollie). Billy Chace’s Snug the Joiner and Jeremy Dubin’s Francis Flute are bros, turning innocuous lines into innuendo with chest bumps and machismo. The biggest scene chewer of the troupe is Matthew Lewis Johnson as an outrageous Nick Bottom.

Throughout this Midsummer, director Phillips makes use of every inch of his new stage. One moment that especially struck me involved Hermia and Helena arguing in the foreground, with Demetrius and Lysander showboating upstage while, in the background and silently resting against trees, Oberon and Puck are surveying the havoc they have created. This sense of visual depth is new for Cincy Shakes, whose previous theater stage was much smaller. I look forward to more of this nuance.

I do have quibbles, mostly around feeling that special effects were overused. The flying rigs are one example; another is the use of lighting and projection, which is better when subtle than during some of the more MTV-like effects in the fairy scenes. Phillips clearly took pains to make every visitor in the roughly 200-seat theater feel engaged and, while it works, there were times I felt I was in the way, trying to tuck in my legs to avoid actors rushing around the stage apron and out of the wings behind me.

All that aside, Cincy Shakes has opened its new home with a funny, newcomer-friendly Midsummer that is familiar but also ambitious. Its team has showcased the new theater and paid homage to their history. I look forward to the rest of their season — this theater company’s transformation is just beginning.