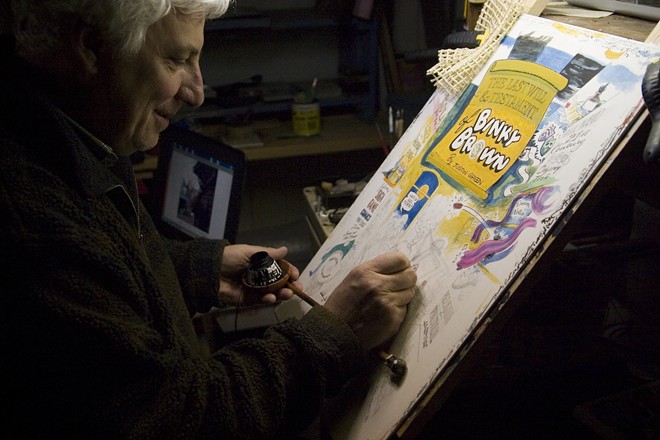 After Justin Green died in April, he was remembered by ArtWorks CEO and artistic director Colleen Houston as “one of our community’s greatest art icons.”

He was that and much more. His 1972 comic book series Binky Brown Meets Holy Virgin Mary is regarded by many as the first autobiographical comic and a progenitor of a major new literary style with origins in cartooning.

Beginning Oct. 6 and continuing through Dec. 31, there will be an art exhibition to show his work’s — and life’s — breadth and depth at (DSGN)CLLCTV in Northside. Opening night is just for friends and family and will be a memorial tribute that requires an advance RSVP at dsgncllctv.com. The public opening will occur Oct. 7 from 7-11 p.m.

Green, his wife Carol Tyler — an acclaimed cartoonist — and their then pre-teen daughter Julia Green moved to Cincinnati from Sacramento in the late 1990s. He started making quite a local impact as a comic artist, a sign painter and a music lover. Green’s monthly comic for the Cincinnati- based Signs of the Times publication, which he had started while in California, proved so popular that a collection was published in 1995. For ArtWorks, he was lead designer and teaching artist for the delightful “A Postcard From Home” mural in Carthage. And in the 2010s, he headed the team that created the popular Cincinnati Musical Legends card deck, under the auspices of ArtWorks and Northside’s Shake It Records.

Green was a meticulous and creative sign painter, whose high standards and belief in hand lettering made his work notable in Cincinnati. His signs are around town, especially at Shake It Records, whose front window features his mural-like painting on wood of a music aficionado browsing a record store’s choice goods under “Wall to Wall Vinyl” lettering. Green also was an accomplished guitarist who wrote a tune called “Sign Painter Blues”.

But he was far more than a local notable. Long before the Boston-born and Chicago-raised Green moved to Cincinnati, he had made his impact with Binky Brown, which he wrote and drew in 1972 while living in San Francisco. There, he was part of its emerging “underground” comics movement. Binky Brown depicted — through an alter ego — the ways in which Green’s obsessive-compulsive disorder (OCD) tormented him, especially as it related to his conflicted Catholic upbringing.

Binky Brown has since been hailed by such “alternative” or “underground” comic giants as Art Spiegelman and Bill Griffith. In 2009, when the prestigious publishing house McSweeney’s issued a hardbound edition of the book, Publishers Weekly called Binky Brown “the Rosetta Stone of autobiographical
comics.” And in 2012, it was the focus of an exhibition in Lisbon, Portugal.

The exhibit opening in October at (DSGN)CLLCTV is called Binky Brown’s Funeral Pyre. His daughter Julia co-owns the gallery with Mike Gonsalves. There may well be some attendees from throughout the country at the opening — not just other comic artists or sign painters, but also Green’s biographer and a filmmaker working on a documentary about him and wife Tyler.

It took quite a while to make this show happen — Green died on April 23 at age 76 from colon cancer. But it was a complicated project.

“I’ve had this gallery since 2021, and I’ve been bugging him to do a show since then,” Julia says. “But he has such a large body of work, he felt overwhelmed by the idea and kept putting it off. When he found out he didn’t have a lot of time, he wanted to do an art show as one of his last hurrahs. Then, when he found out he had maybe three months left, he said, ‘I want this to be instead of a (traditional) memorial service. I want the opening to be as soon as I’m on my deathbed so people feel urgency to see it.’”

Her father’s health declined too rapidly for an orderly planning of the show to be completed quickly. When Green died, he was still drawing sketches for the exhibition, which he had also titled. The immediate family — Julia and Tyler — needed until now to do the show right by Green’s wishes. They also wanted to plan ancillary events during the exhibition’s course, with information to be shared later. Green’s daughter from an earlier marriage, Catlin Wulferdingen, also provided some general input. It became a very personal project.

“We are not a museum; this is my daughter’s gallery,” says Tyler. “What has to come through is the love, because Julia and Katie are mourning their dad and honoring his wish.”

While Green saved much, his originals for his work — including Binky Brown — had often been sold inexpensively.

“In the 1970s, he was in a renegade art form, so the value placed on his work then wasn’t what it is today,” Julia explains. “Oftentimes, my dad would just sell them to collectors to make rent. But the miracle is he did still save a lot of work.”

Saved and planned for display, she says, will be his sketchbooks, notebooks and writings that outline his ideas. They will be shown alongside work, sometimes originals and sometimes reproductions.

“It’s cool to see his thoughts and process behind finished products — his mind is amazing,” she says.

The exhibition will have a Binky Brown section as well as one for artwork from some of his other underground comics, like the 1976 Sacred and Profane. One section will be devoted to Green’s miscellaneous works, such as ArtWorks projects and in-progress ideas. His studio will also be recreated, and such meaningful mementoes as fan letters from celebrated writers Kurt Vonnegut and Tom Wolfe will be featured, as will correspondence from fellow comic artists Robert Crumb and S. Clay Wilson. Another section will be devoted to his sign making and related art, including work from his Sign Game comic and his workshop.

“He liked signs because they gave him relief from OCD,” Tyler says. “A sign gave him a chance to focus on something and see it through to fruition.”

Green was ahead of the times as a sign maker as well as a comic artist. Tod Swormstedt, the editor who approved his Signs of the Times work and now is president of the American Sign Museum in Camp Washington, says Green’s craft has proven prescient.

“There’s been a renewed interest in hand lettering,” Swormstedt says. “In this era of planned obsolescence, people are really interested in things hand done.”

Swormstedt sees carry-over interest in Green’s advocacy of artful signs with beautiful lettering with the new popularity of tattoos and street murals. The exhibit’s final section will have personal material. This will feature Green’s chair, books, clothing and — for the opening, at least — his ashes.

Everything considered, Binky Brown’s Funeral Pyre will be a portrait of an artist and man as admired by his family, friends and fans.

“There’s all this artwork but the true artwork is him, and this will show that,” says Wulferdingen, who lives in Chico, California. “Everything in his life he approached as thoughtfully as he did Binky Brown."

“Just creating the right set-up for the bird feeders in his backyard took his full attention in the same way that a comic would, or a sign,” she continues. “Or his weird concoctions in the kitchen. I think the show will tell the full story of who he was in a way that people don’t know. It will have the tangible artifacts that tell why we love him.”