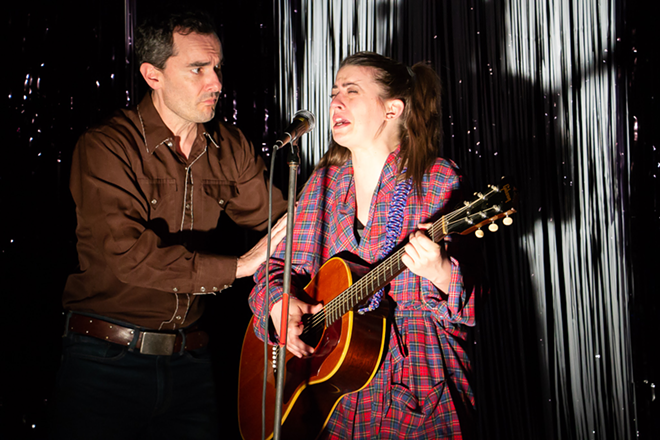 Is there an event in your life you’d like to relive and/or change the outcome? What would you sacrifice for a do-over? One More Bad Thing, presented at the Art Academy of Cincinnati, is the story of two sisters who “plan to start over and be good,” according to the Fringe guide description, adding “Eventually.” Jenny and Kate, the Morton Sisters, were a popular singing duo as children. Then something drastic happened to change their dynamics and affect their strong bond. Or did it? We see glimpses of the past in a recurring dream sequence interspersed with present-day interaction between the sisters 16 years later.

Kate (Erin Ward) is “processing a broken heart in front of 3,000 people” in her dream. She is pretty much a recluse who sings and plays guitar only to herself. “I’m Kate Morton,” she says, “and I don’t like to be around people.” Jenny (Leah Strasser) has turned to a life of crime. She is under house arrest for embezzlement and fraud, and will soon serve a prison sentence. “You’re evil now,” says Kate to her sister. “I always was,” replies Jenny.

They hire a private detective (Simon Powell) to investigate their childhood manager (Dylan Shelton), a strict, demanding force they vow to prevent from doing One More Bad Thing.

There’s no lack of talent onstage or backstage with this production. One More Bad Thing was written by Ben Dudley, a writer, actor and filmmaker who earned a master’s degree in creative writing and briefly taught at the University of Cincinnati. He describes his play as “a darkly comic exploration of morality, sisterhood and revenge.”

Erin Ward received her BFA in acting from Northern Kentucky University and has appeared onstage at Cincinnati Playhouse in the Park, Cincinnati Shakespeare Company, Know Theatre of Cincinnati and New Edgecliff Theatre.

Dylan Shelton is the artistic director of Madcap Puppets, a graduate of Wilmington College (BA in theater) and Ohio University (MFA in acting). He writes and directs original puppet performances and adaptations of great literature that tour both regionally and internationally.

Leah Strasser is the co-founder of Homegrown Theater, a year-round theatre company that draws on homegrown talent. “We intend to keep our projects local,” she said in a CityBeat interview. “Writers, artists, musicians, and designers.” Homegrown Theater has been producing plays for the Cincinnati Fringe Festival since 2012.

Simon Powell’s credits include In the Heat of the Night (Falcon Theatre), In Which I Set Myself on Fire (2013 Cincy Fringe) and The History Boys (New Stage Collective).

Director Jared Doren works at Ensemble Theatre Cincinnati, directs for several companies around town and has also performed on area stages including ETC. He puts his acting know-how and experience to great use staging this powerful play.

According to Dudley, “We like exploring old things in new ways. And new things in old ways. And normal things in weird ways. And funny things in sad ways. You get the idea.” Yep, with this play, we certainly do.