The group, fresh off its "Orange Is the New Barack" album, will show off its biting songs about the current president this Sunday 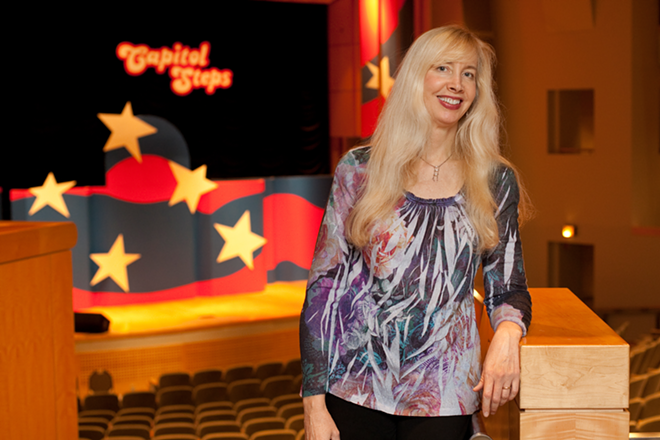 PHOTO: Lawrence Luk
Elaina Newport is a co-founder of the Capitol Steps.

Elaina Newport’s phone demeanor is the chipper disposition of someone who cannot get to work soon enough. The sole remaining original member of the Capitol Steps, a musical political-parody group she co-founded in 1982, Newport picks up her extension and responds immediately with unbridled enthusiasm. Capitol Steps performs two shows at Memorial Hall on Sunday.

“It’s a great time to be in political satire,” Newport says with audible joy. “I’m always in a good mood. It’s almost like politicians are thinking of comedians and no one else.”

Every commander in chief over the past 36 years has provided material for the Washington, D.C.-based song parody/sketch comedy outfit. But, as Newport notes, Donald Trump has offered a full term’s worth of gold in just his first year and a half. As the media has also discovered, the pace of events within the Trump administration is lightning fast.

“It’s almost too fast,” Newport says. “Today, the story is that we pulled out of the Paris climate accord. Next week, nobody remembers that and the story is the Korea summit. You write a song and next week, there’s another story. It’s exhausting.”

As Newport notes, this paradigm is more problematic for the Capitol Steps. Their chosen form of presenting satire is through music, taking a familiar standard, a recognizable classic or contemporary hit and writing new lyrics to highlight the current administration’s foibles. Comedians write a new joke. The Steps rework a song.

“We’re writing a whole song, and making some poor performer rehearse and memorize it,” she says. “We have a Paul Manafort song — he sings ‘I’m So Indicted’ — and he keeps popping up, so that worked out. And Stormy Daniels is not going away quietly.”

Still, somehow the Capitol Steps manage to pull fresh rabbits out of a variety of hats on a nightly basis, the latest involving Trump’s attempt at singing “God Bless America.”

The Steps’ first album of the Trump presidency was the hilariously pointed Orange is the New Barack, which was released last year. The group just finished a brand-new recording, Make America Grin Again, which may be available in CD form at their show at Memorial Hall.

Even so, don’t look for any sea changes in the show itself.

“We don’t shut down one show and open a new one,” Newport says. “We put out an album every year, but basically the show is always evolving. We add a song every week or two, and retire one reluctantly. The show is always kind of turning over.”

While the Steps write roughly a song every two weeks and choose 18 or so for each album, the Trump White House requires different parameters. Take former communications director Anthony Scaramucci, whose tenure lasted a whopping 12 days. Clearly, he’s ripe for the Steps’ parodic microscope, but how long will anyone remember him?

“We debated but we decided to include the song about the Mooch,” Newport says.

It’s not difficult for Newport to consider which of the six presidents that have been fodder for the Steps has provided the best material. It’s also not particularly challenging to see who’s coming in a hot second.

“Until now, Bill Clinton was the golden age of political satire,” she says. “There was a little bit of the same thing going on with Clinton as with Trump; it was hard to be more ridiculous than the actual stories. Linda Tripp putting a wire in her bra, Monica (Lewinsky) keeping the dress; that story got more and more bizarre.

“The same is true today. The good news is we’re bipartisan. If you’d seen the shows in the Clinton years, you would have been like, ‘Oh, you’ve got so many songs about the Democrats.’ Now the Republicans are the party in power, and the party in power is always funnier.”