No, Cincinnati's Paycor Stadium Won't Help You Get Engaged

FirstEnergy Stadium in Cleveland, on the other hand... 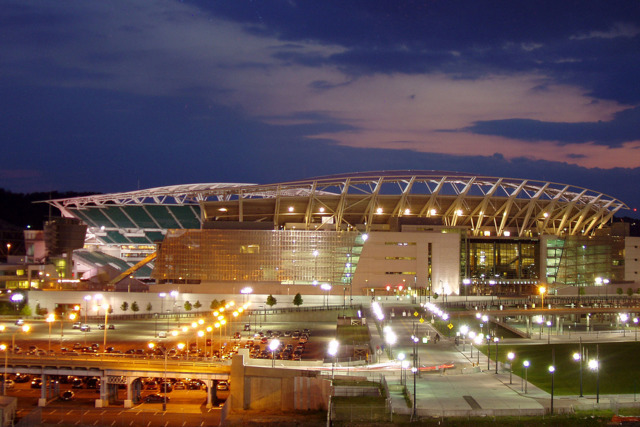 As countless commercials have shown us repeatedly, the winter holidays are a time to prove how much you love your honey by surprising them with an expensive car that they did not choose and a new house that they did not walk through. And if there's cash left over (in commercials, there always are unlimited funds), you may as well claim half of these items for yourself and ask this person to marry you.

If you're a football fan in Ohio, a big NFL stadium might be just the place for popping the question. But alas, not in Cincinnati, apparently.

According to a study from online gambling company Betway, FirstEnergy Stadium in Cleveland is the third-best NFL stadium for surprising your person with a big, public spectacle of love. To arrive at its decision, Betway used public data to evaluate costs for a three-course romantic meal, stadium parking, game ticket, scoreboard message and short-term rental housing near all 30 NFL stadiums. Betway then normalized data for each category and scored it 1-5. Stadiums with the highest total rank higher.

Fans of the Cincinnati Bengals' intrastate rival Cleveland Browns could be looking at a happy holiday season, indeed. Betway says that a romantic meal at FirstEnergy Stadium is around $85.50 and parking is $22.43. A ticket to the show is about $100, as is the carefully plotted scoreboard proposal message. Celebrating with some backfield action in a cute rental nearby will cost around $146 per night. Altogether, proposing as the Cleveland Browns flop around could add up to more than $454. That seems like a lot, especially after the whooping the Bengals just gave the Browns.

Unfortunately, Cincinnati automatically puts a flag on the play when it comes to getting engaged at Paycor Stadium, as the Jungle doesn't permit scoreboard messages. "Special announcements on the public address must be limited to medical and police emergencies. Paycor Stadium does not display birthday, anniversary or other personal messages on the scoreboard," the stadium's FAQ says.

Technically, you could still propose in the presence of Joe Burrow, Ja'Marr Chase and 60,000 other people at Paycor – you just can't do it on the big board. And if you don't pop the question on that, is there any point, really?