The Mothman Museum, A Creepy Cryptid Road Trip Just Outside of Ohio

You are guaranteed to find a 12-foot statue of him in Point Pleasant, West Virginia. 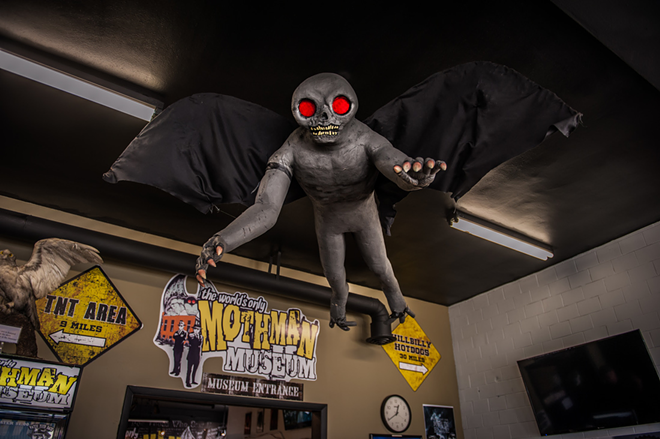 Photo: Mothman Museum
The first sightings of the Midwest's most famous cryptid, the Mothman, were reported on Nov. 15, 1966.

Many say you can search down a dark country road for one of the Midwest's most notorious cryptids. However, you are guaranteed to find a 12-foot statue of him in Point Pleasant, West Virginia.

A two-and-a-half-hour drive outside of Cincinnati sits Point Pleasant, which claims to be the town where the infamous Mothman sightings and encounters “actually occurred.” But as an Ohioan, I have to disagree and say they mostly happened in the bordering town of Gallipolis, Ohio. Reports vary.

The first sightings of Mothman were recorded on Nov. 12, 1966 by a group of gravediggers at a cemetery in Clendenin, West Virginia. Just three days later, The Gettysburg Times reported that three people told a deputy sheriff a "flying man with 10-foot wings” followed their car. The creature — which also boasts massive red eyes — got its "Mothman" moniker from newspapers detailing eyewitness reports. At the time, the cryptid was suspected to be a sandhill crane.

Following a series of increasingly strange paranormal experiences, Mothman became known as a harbinger of death. And just 13 months after the initial sightings, 46 people lost their lives in the tragic Point Pleasant Silver Bridge collapse. According to the West Virginia Department of Transportation (WVDT), on Dec. 15, 1967, eyewitnesses reported a “loud gunshot-like noise,” and the bridge — which connects Point Pleasant to Gallipolis — collapsed into the Ohio River in a matter of seconds. Thirty-two vehicles and 46 people were taken into the water. WVDT says the death toll includes two bodies that were never recovered.

Many say the Mothman appeared as a warning of the impending disaster (as is detailed in The Mothman Prophecies book and film); some say he caused it.

Officially, the Presidential Task Force on Bridge Safety says the disaster was caused by a “cleavage fracture in the lower limb of the eye of eyebar 330 at joint C13N of the north eyebar suspension chain in the Ohio side span.” The world may never know.

But we do know that the Mothman has become a national icon... and possible sex symbol. I have found hundreds of Mothman fanfics on Wattpad and Archive of Our Own that are not safe for work — and maybe not safe for anyone, anywhere ever.

If you’re a freaky fanatic, check out the Mothman Museum in Point Pleasant, where they have the "largest collection of props and memorabilia from the movie The Mothman Prophecies,” according to their website.

The museum boasts historical records of Mothman reports from the time of the initial incidents including “press clippings & video footage of the Silver Bridge disaster, UFO activity, & Mothman articles.” And handwritten police reports from the firsthand accounts of Mothman eyewitnesses.

Visitors can learn more about “historical figureheads” of the Mothman tale, including exhibits on paranormal investigator and author of the Mothman Prophecies, John Keel, as well as newspaper reporter Mary Hyre and the Scarberry and Mallete eyewitnesses.

The museum is also adjacent to the giant Mothman statue. Crafted of stainless steel by Point Pleasant welder Bob Roach and dedicated in 2003 (per Roadside America), the Mothman figure boasts six-pack abs, chest hair and claws. A 24/7 "Mothcam" camera is pointed at the statute and footage is viewable online.

Of course, there are are plenty of photo opportunities and merch available to capture your unique cryptid experience.

While I still say this creature belongs to Ohio, Gallipolis has yet to capitalize on the legacy, so you’ll have to cross the river to learn more about the legend.