Embrace your inner geek at these gaming hubs 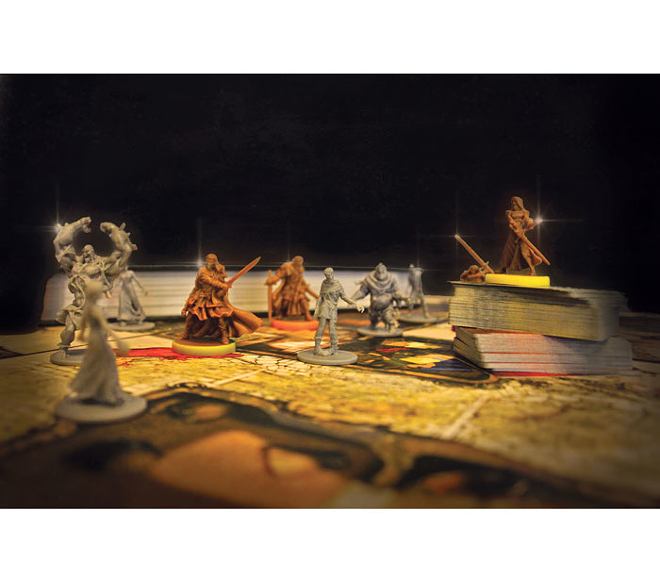 Photo: Alexandria Dupont
RPG and tabletop games abound at Arkham House Games.
Ah, the Demogorgon. The powerful, two-headed demon prince is largely regarded as one of the greatest villains in Dungeons & Dragons. The Stranger Things kids refer to the show’s slime-dripping beast by the same name — one of many D&D references they use to try and make sense of the events unfolding around them. Storytelling is the meat and bones of the hugely expansive role-playing game, originally published in 1974; rounds last hours at a time as players assume the role of wizards, orcs, clerics and more, narrating their characters’ actions through quests for treasure, daring rescues and battles with deadly foes. Take on the monster yourself or go on a boozy gaming binge and embody a mythical character at these eclectic local gaming hubs.

It’s on like Donkey Kong at this boozy retro hangout, where the 1981 Nintendo classic is one of 50 vintage arcade games on the floor. The best part? Gameplay is free with the purchase of a drink. Boot up Q*bert, Pac-Man, Centipede, Mario Bros., Space Invaders and many others while imbibing a variety of old-school and game-themed cocktails like Game Over, a magical mix of eight liquors, Hawaiian fruit punch, lemonade and Sprite. Also on the menu: the Bill Nye, the Macho Man and the Kevin Bacon, with Jim Beam maple bourbon, ginger ale and real bacon jerky. The bar also serves more than 20 craft beers on tap, plus specialty cans, bourbon, whiskey, rye and scotch. If you’re looking for a more nostalgic option, opt for a boozy Slush Puppie. Go online for a calendar of tournaments and special events; this week kicks off with Wayback Wednesday, with screenings of ’80s flicks like Mortal Kombat and $2 off craft drafts until 8 p.m. Free to play with drink purchase. 1331 Walnut St., Downtown, 513-381-1616, 16-bitbar.com.

Don’t be fooled by this arcade’s unassuming location in the Cincinnati Mall: inside is 7,600 square feet of more than 70 arcade and pinball cabinets and 20 different game stations. Play classic arcade games like Millipede, Tetris, Galaga and Arkanoid; side-scrollers and puzzle games like Battletoads; fighting games like Street Fighter and Mortal Kombat II; and sports and lightgun games like Silent Scope, NBA Jam Tournament Edition and Point Blank 2. Try your hand at three different pinball machines (and be on the lookout for a new Fire Pinball machine coming soon). A console area has 20 different stations, ranging from Atari 2600, NES and Sega Genesis to the PS4 and WiiU. The arcade also buys and sells all types of video games, board games, manga and action figures and hosts frequent tournaments (Magic the Gathering, anyone?) Daily rates: $10 ages 12 and up; $6 kids 4-11; free children under 4. Hourly rates: $5 one hour; $8 two hours. Cincinnati Mall, 662 Cincinnati Mills Drive, Fairfield, 513-874-8766, arcadelegacyohio.com.

This boozy take on Arcade Legacy “combines three of your favorite things: video games, alcohol and food.” And honestly, what could be better? The Northside location opened its doors in August 2015 and features many of the same elements as the original Fairfield location: about 50 arcade games, pinball machines and a lounge with current and classic consoles. The big difference here is Bar Edition’s creative and extensive menu, on which hot dog concoctions are the stars. Begin with an all-beef or veggie dog and choose from 12 themed creations like the Anti-Hero, with fried egg, bacon and mayo; the Sweet Tooth, with goetta and maple syrup; and the vegan Jessica Rabbit, with hummus, carrot, leafy greens and Dijon balsamic (a custom dog menu is also available). Although the bar is typically 21+, all ages are welcome 4-8 p.m. Sundays. Free with purchase of food or drink. 3929 Spring Grove Ave., Northside, 513-429-3180, arcadelegacyohio.com.

Dungeons masters, prepare thyselves: Beginning Oct. 7, Arkham House Games hosts D&D Encounters every Wednesday night. But newbies, fear not: starting on Sept. 15, the store will hold a D&D 5th-edition Dungeon Master mentorship program for players of all experience levels. Learn about the game from some serious experts; participating Dungeon Masters — the D&D player who organizes the game, creating details and challenges for other players — have decades of experience and have run tournaments at major conventions like Columbus, Ohio’s Origins Game Fair and Indianapolis’ GenCon. But that’s not all the store has to offer: weekly onsite tournaments feature games like Magic: The Gathering, and a large lending library beckons customers to try their hands at something new. You can even bring in your own food and drink — including alcohol — to fortify you while you game. 1609 Madison Road Suite B, East Walnut Hills, 513-818-9936, arkhamhousegames.com.

This mecca of vintage games and trading cards is difficult to miss: Keep an eye out for a life-size window painting of Super Mario hurling a fireball. Inside, an entire wall is dedicated to video games and consoles of yore: Gameboy Color, Nintendo 64, NES, you name it. But the real passion here is for Magic: The Gathering: players nearly always fill the lengthy in-store tables, and the store stocks too many Magic trading cards to count — many of them rare. Game Swap frequently hosts tournaments onsite, and a friendly and knowledgeable staff is always willing to discuss game mechanics, address questions and introduce players to new games. Customers can also grab unique board games from the lending library before purchasing one (or three) to take home. 1065 Reading Road, Mason, 513-770-0170, gameswapstores.com.

With nearly 600 games to choose from in-house, boredom is banished at Cincinnati’s first-ever board game parlor. Get your hands on nearly any title imaginable: Catan, Battleship, Cards Against Humanity, Trouble, Connect Four, Yahtzee, Sorry, Bingo — the list goes on and on. If that seems a little overwhelming, head online before arriving at the bar. An online library allows users to search for specific titles or by categories like genre, difficulty and number of players. Tournaments take place every Tuesday; a King of Tokyo competition takes place Sept. 20, and a Dominion faceoff follows on Sept. 27. Euchre Nights are also held every Sunday. Although Dungeons & Dragons isn’t currently on the roster, the bar plans to implement a user-friendly version in the near future. 1115 Vine St., Over-the-Rhine, 513-954-8191, therookotr.com.

Wander into the secret labs at Sci-Fi City, “the highly classified Cincinnati research facility” that makes no attempt to conceal its love of gaming. Play Xbox games on the store’s four large TVs — up to eight players can join in — while reclining in a plush theater chair complete with individual sound and vibration. Bring your own games to play or select from the wide variety available in store. Sci-Fi City also features six tables for in-store gaming, complete with stocked miniature terrain. Every Wednesday, the store hosts new-player-friendly D&D Encounters from 6-9 p.m. — perfect for getting your feet wet as a wizard or a cleric. Northgate Mall, 9501 Colerain Ave., Colerain, 513-245-9105, sci-fi-city.com.